Hi ya'll me again - busy as ever but actually happy to tell you I made it out for photos FINALLY!  I finished up my scroll project (a present for a friend so you won't see it till later) to continue work on my serial multi tasking.

On Thursday I finally got my new lens to go on the new camera and Friday night was my first date with it.   No practice, steep learning curve and hoping I could pull it off.    Knowing we were to have a clear night (but the weather would change over the weekend) I called up my buddy Robin and asked if she'd like to take a run up the Rocky Mountain Front with me as I had and "idea" (that would scare off most of my friends).   She was game so I loaded up the cameras and we took of Friday evening.

The small settlement of Stearns emerged in the 1890s as homesteaders filed claims between the towns of Wolf Creek and Augusta. Stearns became a focal point for the scattered community and, by 1900, boasted a school and a post office. The Enlarged Homestead Act of 1909 brought new arrivals and in 1910 Stearns had grown enough to need a community hall. Local members of the Modern Woodmen of America, a fraternal benefits organization, took the initiative in coordinating the community for its construction. Built between 1910 and 1911 on property left in trust by rancher F. M. Stowe, the hall was constructed of lumber milled from logs from the south fork of the Dearborn River. The local builders, experienced in barn raising, designed the spacious hall to reflect their agricultural base. A St. Patrick’s Day dance christened the two-story hall in 1911. The second floor was removed in 1912 to allow for basketball games, and the facility became the center of social activity. Drought and depression ended the homestead boom and the population of Stearns dwindled after 1921. The automobile simplified travel to larger towns, and the hall was even less frequently used for community activities. In the 1940s, it served as dining room and dormitory for construction crews working on Highway 200 over Rogers Pass. While other reminders of Stearns have fallen victim to time, Stearns Hall is a lonely representative of one community that rose and fell with America’s last homestead boom.

Now on to pictures of the barn/hall.   The sun was shining at such a cool angle that I had to stop and try out my new lens. I'll tell you more about equipment at the bottom.   This first shot I pulled off the camera and did nothing to and not too bad.   I also wanted to see how to get my multi exposures for HDR and that is what the last 2 shots are each processed a bit differently. 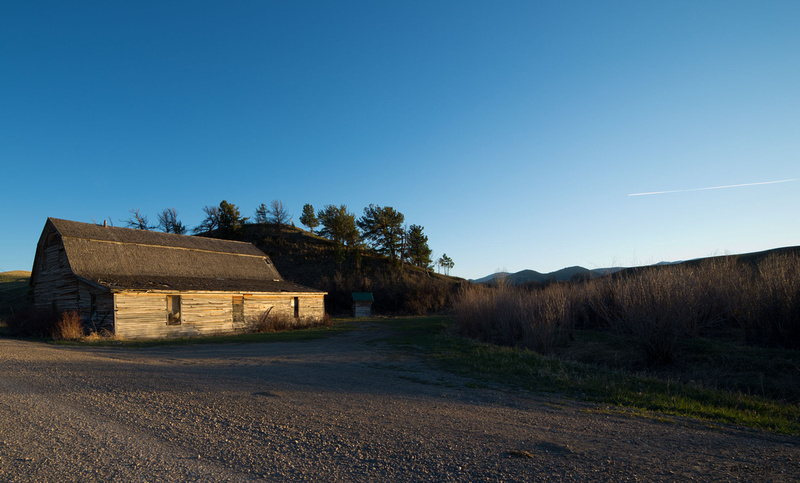 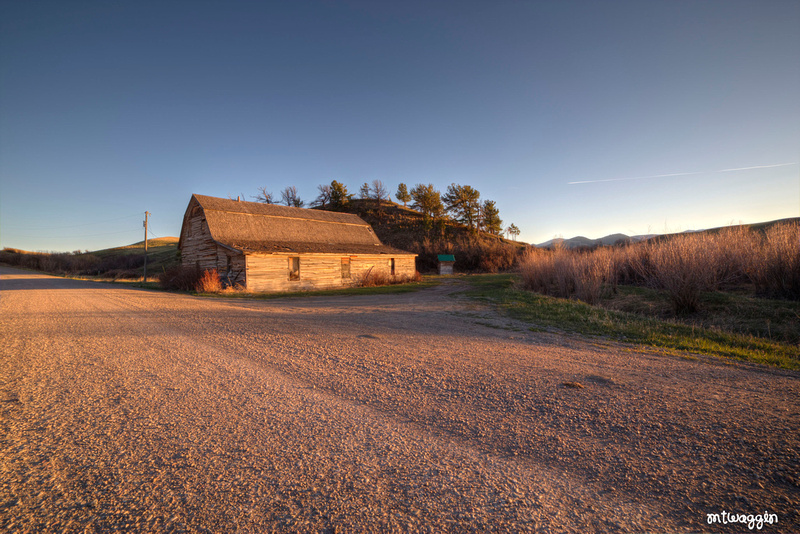 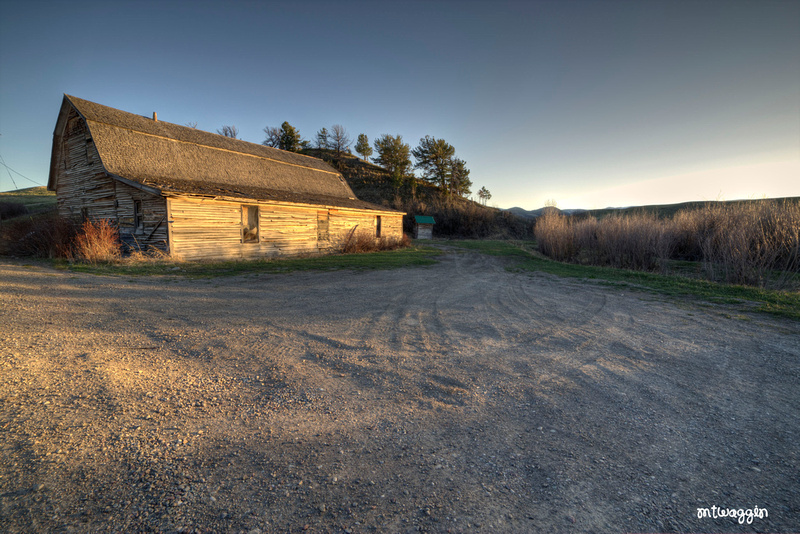 So new equipment.   With the trips planned this year and my little Rebel that is just about on it's last leg (hey it is a first generation and has almost 30,000 shots off of it) I justified in my pea brain that I would get a new set up for my "other" type of shooting.  I have my Canon 60D crop sensor and my bad a** telphoto lens for wildlife and knew I did not want to be taking that huge lens on and off that camera to do scenery.   I also wanted to see if I could afford a full frame sensor camera and I found the mid range (read cheapest I could find) Canon 6D on sale with some free accessories on the Canon website and ordered it.  Oh yes, research (weeks and weeks) also said this would be the best bet for astro/star photography which I really want to explore more.  I had an idea and recommendation for a wide angle lens from Canon to go with it but I just could NOT justify the cost.  Another option kept coming up and that was the Rokinon 14mm f2.8 lens.  The downside is it is all manual, but honestly those of us from the old film days (yup I'm that old) should be able to figure it out.   The other comment was - when doing landscapes and the like you almost always have it set to the same f stop and focus anyway.  Yup, made sense so I ordered it.

So there are my first 3 shots, have lots more to learn on the camera and some on the lens (not really much there except to remember to manually adjust it).   Oh and did I mention I also spent the evening learning a new tripod and ball head.  Yup!  That old icky tripod I absolutely HATED went willingly to my friend Robin.   I didn't want to have spend money on a camera and lens to take fabulous landscapes and have a tripod that wouldn't level or sit solid!   It took me 1/2 the evening before I figured out how to get the center support to move and lock!   Yeah, you can laugh!

I did some star shots too but I'm saving those for the next post (and visit about the challenges that brought about).

Far Side(non-registered)
Cool, now that is my kind of shopping! I like the first photo very much! I would be lost in manual all the time...so you rock! :)
No comments posted.
Loading...
Subscribe
RSS
Recent Posts
I Am Still Here! July 19-31, 2022 Week of July 10, 2022 Week of July 3, 2022 Week of June 26, 2022 Week of June 19, 2022 Struggling with Titles Dogs and Friends and Parrot and Projects - Oh My On To Summer (Projects Galore) Crazy End to May
Archive
January February March April May June July August September October November December
© MTWaggin Photos & Blog
Powered by ZENFOLIO User Agreement
Cancel
Continue