All Fun and Games

Even though the smoke in the air has basically kept everyone inside (I do feel for those that still have to work outside in this and even more, the firefighters) there has still been progress on a few miscellaneous projects I've had in the works.  Actually there has been COMPLETION of a few of them which makes me very happy!

The massive cold front that screamed through here last weekend prompted the quick (albeit windy) removal of the the back patio furniture and the top of the pergola.   Something I had planned to do in another month but with the smokey days I decided Mom and I wouldn't be using it anyway and I didn't want the winds to rip the top to shreds.   So check that off the to-do list!

After that cold front moved through though we had a glorious Saturday morning with no smoke and Mom and I took advantage and picked up the remaining cement pavers to finish the bottom portion of the back slope gardens.  Check!  Another to-do off the list!

Okay so it hasn't all been "work" type projects.   A few weeks ago I got some weird urge to create.   So knowing that I had one more spot in the trailer that I wanted a piece of wall art of sorts I set off trying to figure out what to do with that.   Sticking with the crazy quilt theme that has come about inside the trailer I thought I'd like to do something with a quilt feel, but honestly, I'm not ready to dig out the sewing machine.   What I decided was to fake quilt!  HA!   I have a stash of pattern papers and with all the cool papers there are out there for scrapbookers I took a quilt pattern found on Pinterest that was all squares and went to cutting. 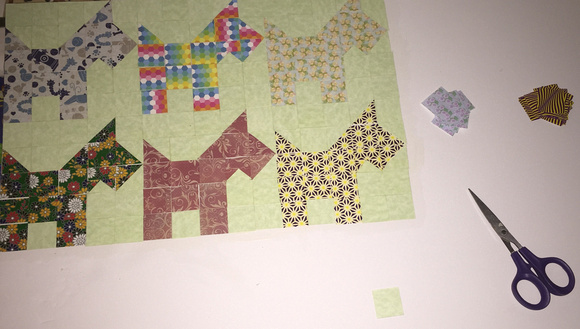 I glued each piece on some foamboard I bought and then did 2 coats of Mod Podge (remember that stuff?) over the top.   It will be lightweight and I'll just Command  Strip it to the wall - no frame no nothing.    Of course if you look above not all my squares were perfect but I think I got that fixed up in the final product.  Hey it wouldn't be perfect if I sewed one either! 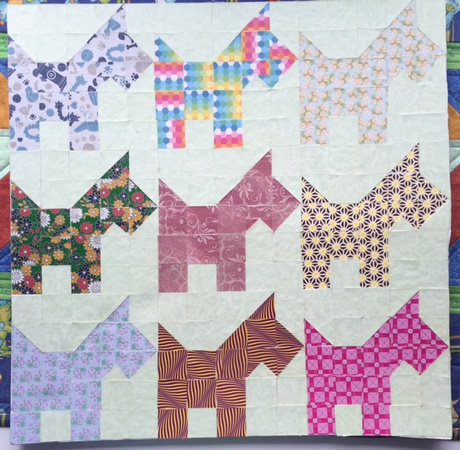 Ongoing project #2 was a rope market bag for my Mom (on her request).  She had seen a crocheted rope basket I did for a friend and asked for a hefty bag.   I can safely say I'm done crocheting for a while now and while this wasn't by any means a "cheap" project (have you seen the price of rope these days) it did turn out really nice and she was happy with it as it has an actual bottom to it not just a seam and she likes the colors (yarn I'd gotten for another project and didn't use it all). 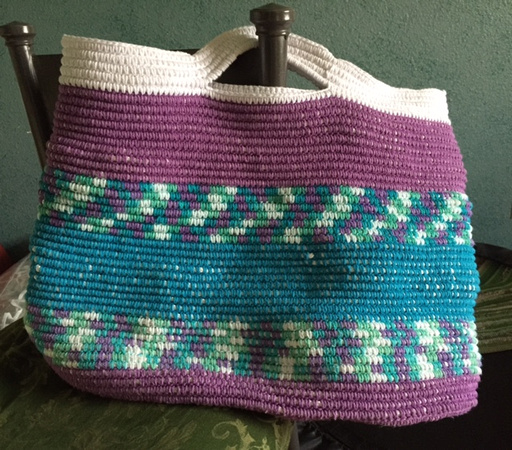 Last but certainly not least was a creation of a better way to secure the dog ramp that I use on the trailer (to help small old dogs get inside as the steps are too tall and the tiny steps I tried didn't work).    I had purchased some stand jacks thinking they'd work great for putting under the ramp (just for dogs not people) but one poodle escapade and I knew that wasn't the answer (Sterling leaped on it and toppled the whole thing).  I needed some way to SECURE it and still get it up high enough that Dot could get inside and juuuuust far enough down that the door would still close.   The ramp and the human step will share the doorway.    Since the plastic steps I'd gotten for humans to use (instead of the metal pull out step) was also not working (just not stable enough) I wanted a way to use the metal pull out step AND put the ramp in.  I let my brain spin on it for a while and built what I HOPE will work (to be tested next trip out with the trailer).

The ramp has two rubber feet on the top end of it and those were really going to be the only thing I could utilize to keep in in place (short of putting something on the bottom myself).   So this is what we ended up with from a bit of scrap wood and a clamp or two to secure it.  Small, portable, sturdy but not yet poodle tested!  If somehow the rubber feet pop out of the holes I figure I can somehow remove those and put longer "feet" in that would stay better. 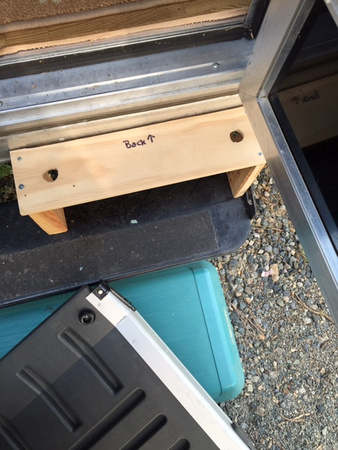 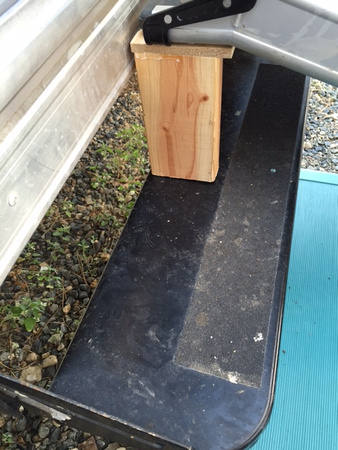 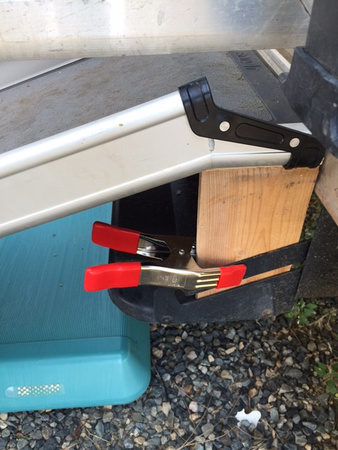 Yes, still other projects rolling around in my head.  Some warm windows coverings for my brother and his trailer is on the list (yes, more sewing), some scroll saw work. as well as the remaining Fall things outside that need to be done, when the smoke clears and my asthma allows that to happen that is!  :)

Sending RAIN DANCE energy to the entire upper Northwest!!!!  Bring It On!

Linda(non-registered)
You are so multi-talented! Two thumbs up for a very neat job!