Trip Report Round Up

We had a lovely trip down and back (and during) for a long weekend in Red Lodge.   I hitched up the trailer, loaded up my Mom and the entire dog pack and left on Thursday afternoon amid BIG winds in the valley.  Luckily they were cross winds and we didn't have to fight it all the way to Three Forks.   Had a stop at the Wheat Montana Bakery (pretty much a required stop if you go by it) for a potty break and baked goods for the weekend and we were off.   Arrived to hot and humid (read sweating buckets while setting up) Yellowstone Dog Sports and pulled in next to friend Adele who had been there all week for dog camp.

This was the first and "trial" run trip for me with my Mom and all the dogs so yes there was a little stress for all concerned but the weekend went really well!   In addition to dock diving, walking dogs around and yes, even getting Sterling hitched up to his cart for a go one evening, we sat around a lot, drove into Red Lodge and walked and window shopped the main drag through town (even though 1/2 of it is torn up) including a stop at Scoops for a Wilcoxson's ice cream.

Sunday I had left the day open to load up and head up Beartooth Pass and since the weather dawned with massive smoke in the valley I had hopes that we'd climb up and out of the stuff that was pushing my allergies and asthma to the limits.   We were lucky...we climbed out of it but got to the top to some hefty winds and cold temps (low 40s) which pretty much kept Mom in the truck admiring the scenery while I popped out here and there to take photos.  (More of those to come).

We headed home Monday in absolutely pristine towing conditions - until we were 30 miles from home where we hit massive headwinds for about 15 miles pretty much shooting my gas mileage into the crapper (teach me to boast about how great the mileage was that we were getting).  Still did better on gas than I thought we would and I think my 200 miles per fill up is going to be a safe bet for planning.

Home to cold and wind and smoke and a little rain and oh surprise the deer figured out we were gone and had a little tasting tour of the front yard while we were gone (and I see I'm going to have to work on more Epic deer chasing training in the Back40 too).

These are just a few of the random shots around the trailer this weekend.....and yes, even though I now have those nice benches for us to sit on - fighting off the dogs to get a spot is still proving to be a challenge!  :-)   While not  a recliner it definitely is more comfy than the ottomans were.   Still have a few more tweeks to do to before we go on our trip in September but all in all I think Mom and I and the dogs all got our "groove" on pretty well!

Teddy was so relaxed (yes he was up on the couch as I was on the floor - go figure).... 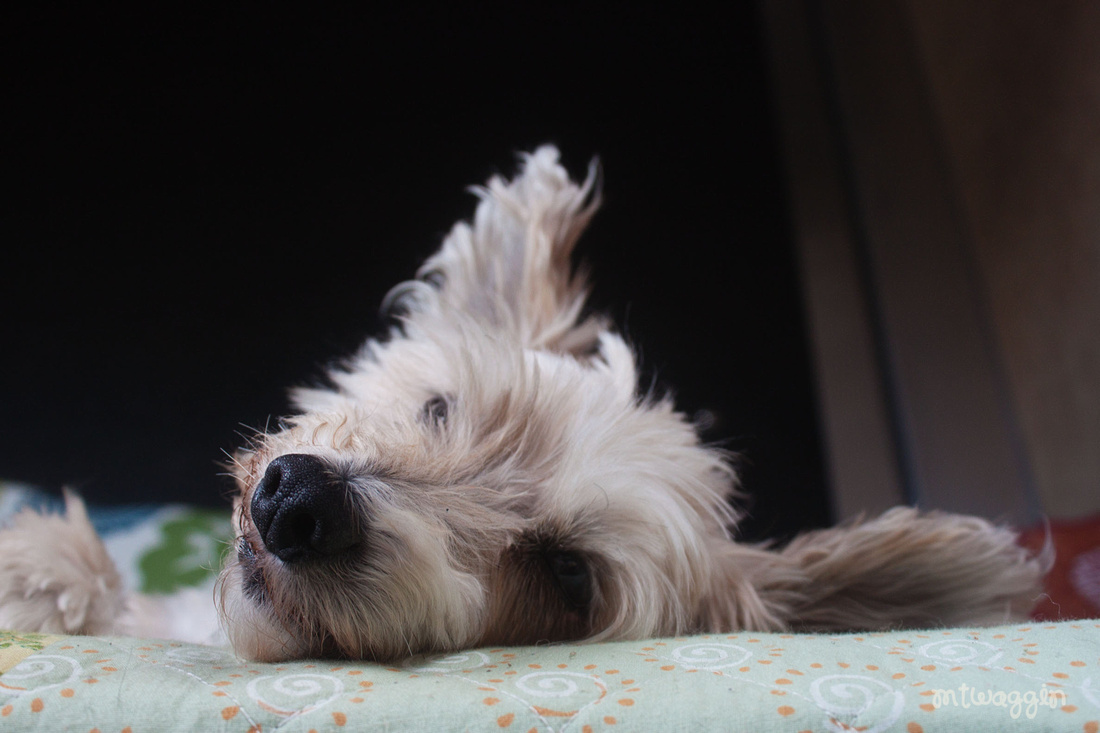 Magic (at 14) out enjoying the sun when we had it.   It was so nice to set up the expens and be able to just let them have a yard to hang. 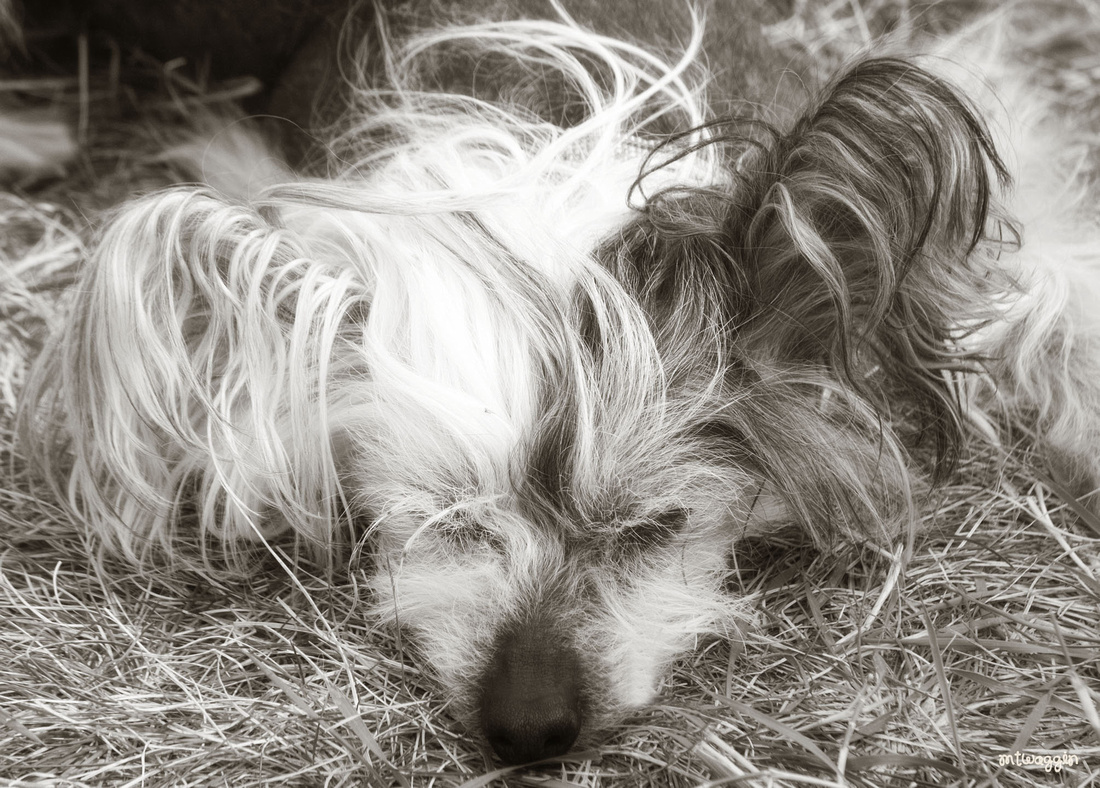 I've never seen these two boys relaxing together but then we saw many things from Louie (all good) that we've not seen before this trip).  Sometimes it is good to get outside his "box".   (For those that will ask, yes that is a diaper on Bandit - I have a few of my smaller older boys that will still occasionally lift their leg inside - this solves that issue and I don't have to be constantly on alert).

Elliott - always on alert.  We call him our meerkat. 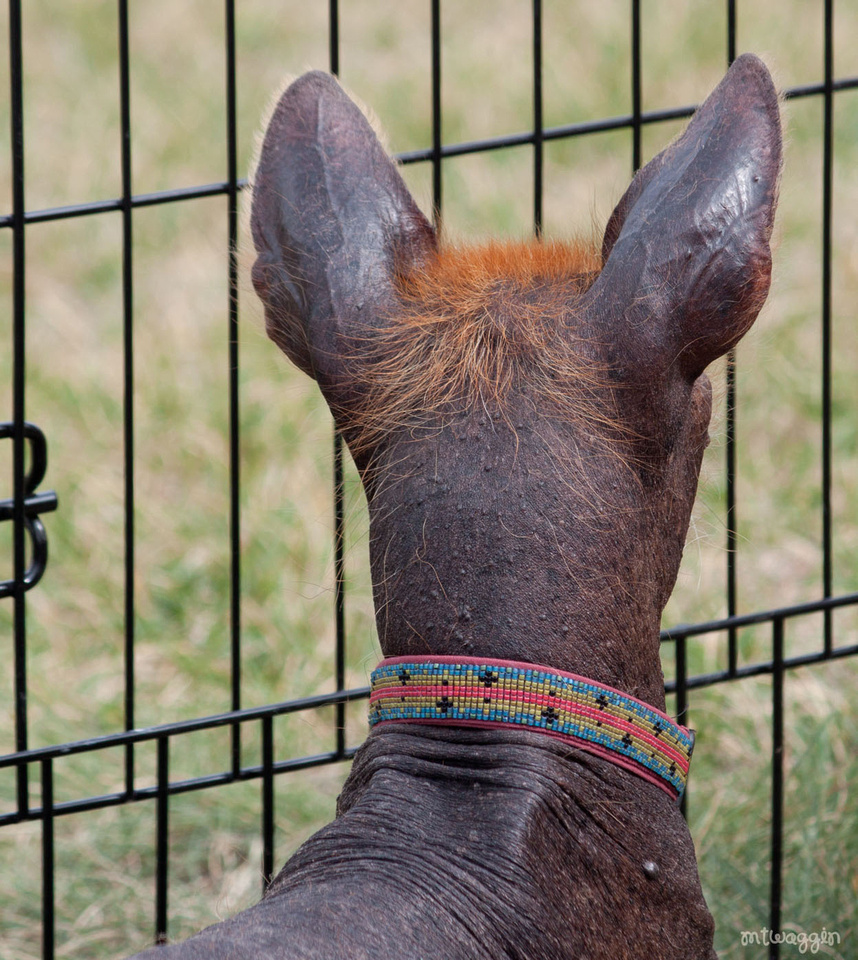 Dot found that the indent between the two benches was just right for her....she lays in some pretty interesting positions in general so this wasn't a surprise to me at all. 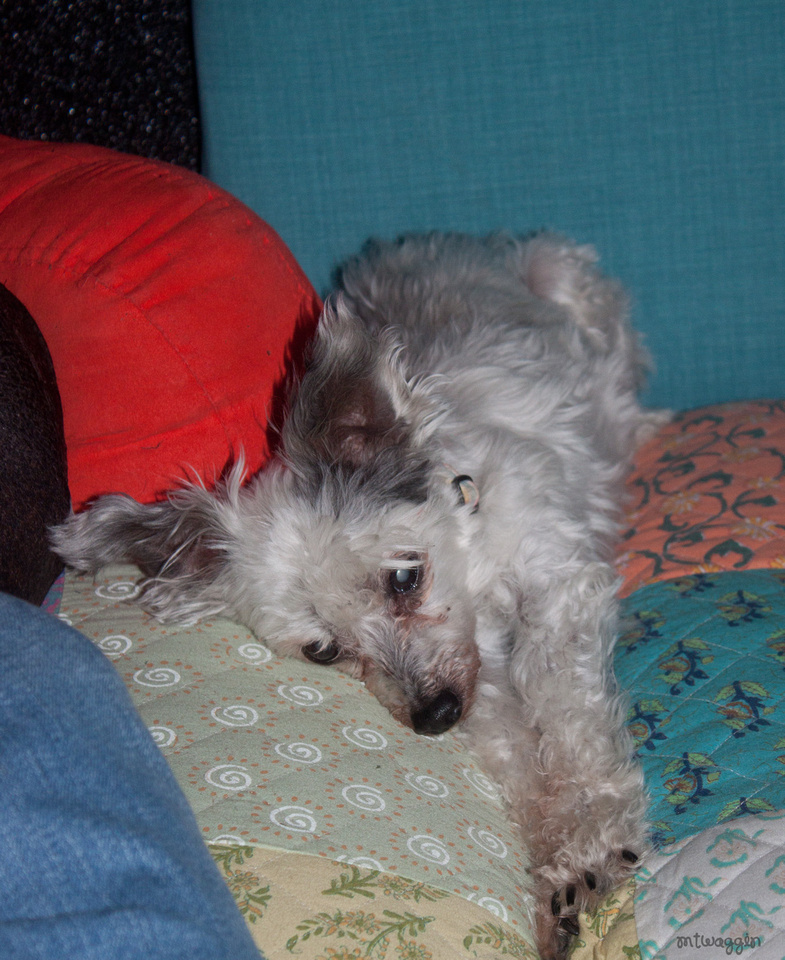 In addition to dock diving at YDS this weekend there was also a Nosework trial and I snapped these shots while the vehicle searches were going on right outside our trailer.

This gal always has the most lovely (and big) red dobermans!  I've trialed with her for years. 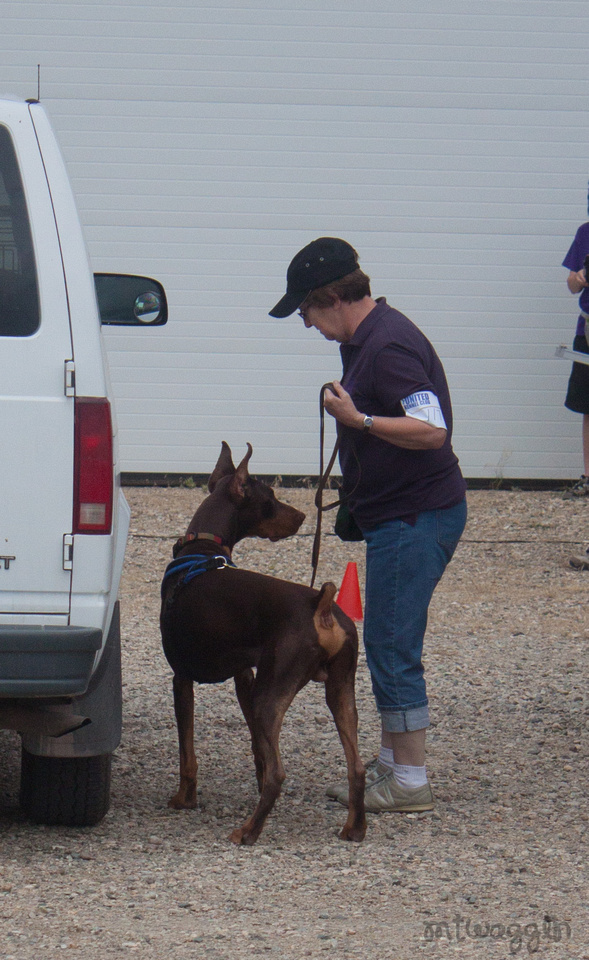 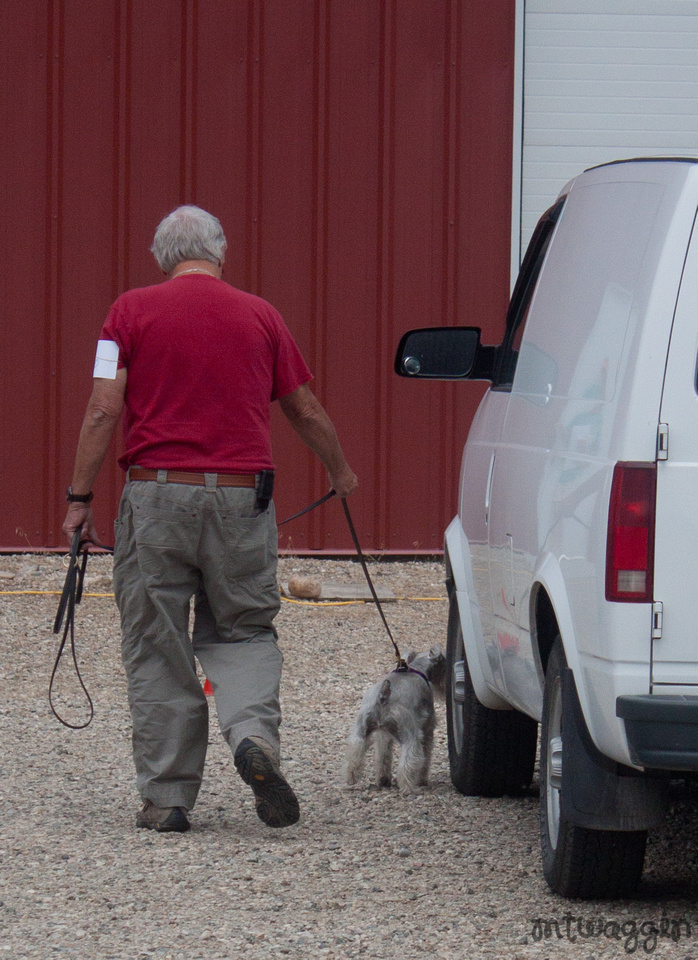 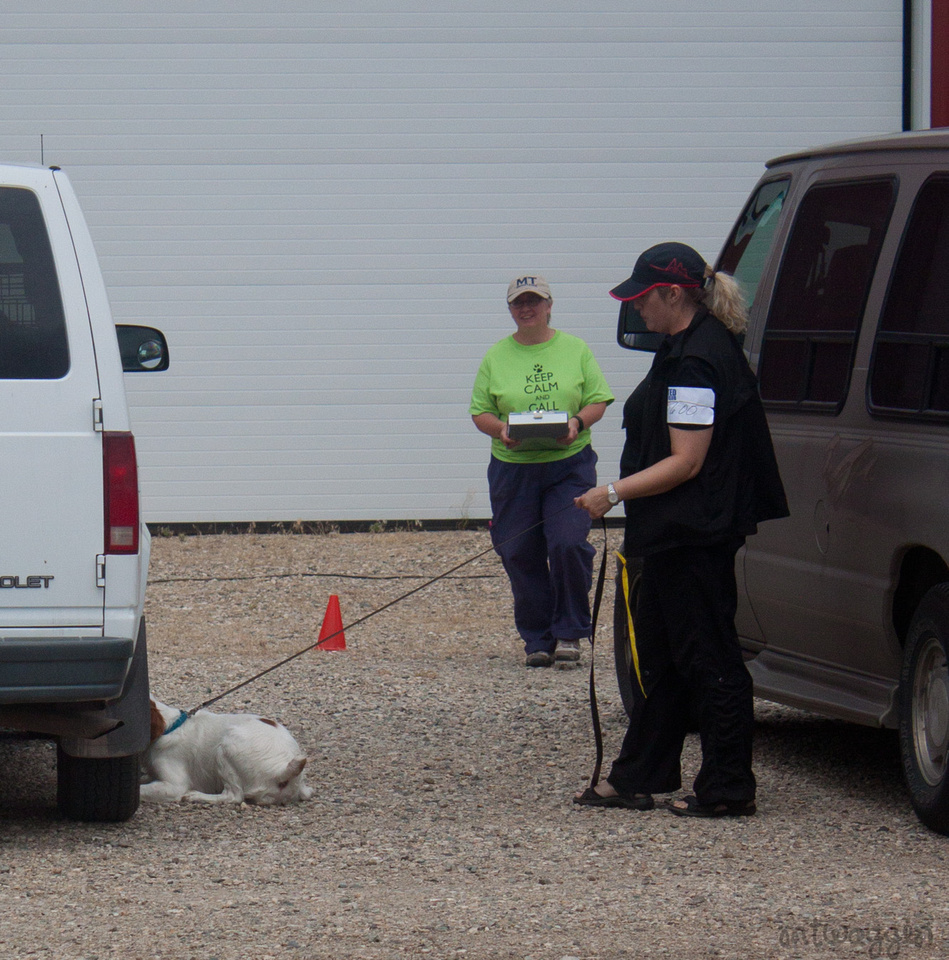 Linda
http://coloradofarmlife.wordpress.com
Kim(non-registered)
Sounds like a magnificent trip. I use those pens too, for puppies, and still have one set up semi-protecting a bookcase and computer cables from nibbles as my youngest girl learns what she can and can't eat. Maybe I'll pack it up now as I'm sure she doesn't need it any more. There's nothing quite like the freedom of setting off in a van, you make me want to hop in my vehicle and start driving!
diane(non-registered)
Glad you had a successful weekend. It sounds like work to me.
Sue(non-registered)
Gotta love those ex pens. We aren't allowed to set them up in lots of private campgrounds, but here at Ridgeway State Park (colorado) we have them both connected together and the dogs are loving the freedom it affords! People walk by and I wonder what they think when they see us sitting in the "dog pen" enjoying our second cup and/or happy hour!
No comments posted.
Loading...
Subscribe
RSS
Recent Posts
January 15-22, 2023 January 9-14, 2023 2023 - Already Merry Christmas November Already Fall Projects July, August, September I Am Still Here! July 19-31, 2022 Week of July 10, 2022
Archive
January February March April May June July August September October November December
© MTWaggin Photos & Blog
Powered by ZENFOLIO User Agreement
Cancel
Continue