After 9 months of talking and planning June arrived and so did our big trip to Summer Dog Camp.  I'll write about actual camp in the upcoming posts but today you get a bit of "before and after".

I mentioned that this vacation had been in the works for quite some time and a couple weeks before we were to leave my Mom said she would be happy to come North early and stay home with the little dogs (the plans for camp were more oriented towards the poodles but more on that next post).  I accepted her offer and she arrived 4 days before we left and the day my vacation from work started.   I knew we'd be so busy with camp that the little dogs would be spending most of their time in the trailer (not that they care) and after a big scare with Magic 3 days before we left I was glad about the decision.

So Magic started having breathing issues and was diagnosed with aspiration pneomonia and congestive heart failure.   I was pretty sure while at the vet he was going to leave this earth literally while I was sitting waiting to get his final check out but Dr. Davis pulled him back and got him started on all the right meds which has turned him around.  Probably not forever (he is 15 and this isn't something you can cure) but he definitely feels better than he did.   He will go back for another round of tests in about a week and see if we need to adjust meds again. 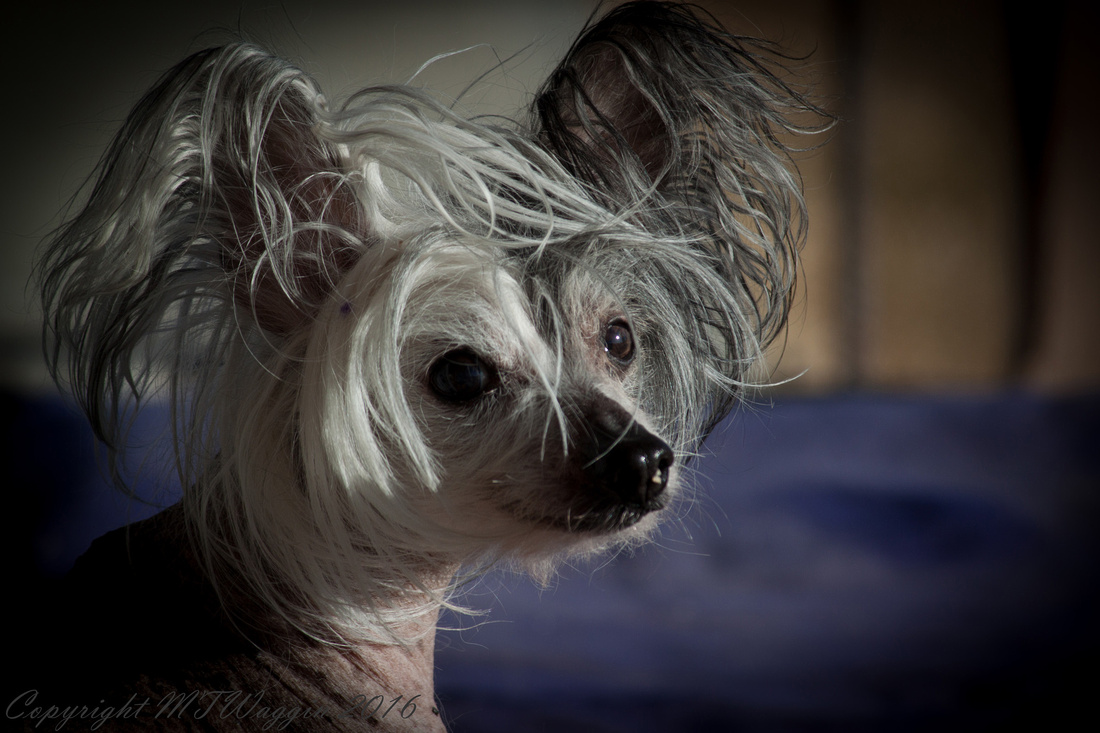 So nothing like a bit of stress to start vacation!   Oh and I forgot to mention that the week before my vacation from work started my team got "reorganized" yet again (yup, 3rd time in 18 months) and we lost our new boss and were assigned a different one.   Exhausting to say the least but blessed to still have my job - again.

Not wanting you to think I didn't have the presence of mind to take the camera (I took them just didn't have a chance to use them much) I wanted to share some pictures.  I jinxed the nights I hoped to get tips on star pictures from a friend at camp  (clouds and rain) but am happy to report he got some AMAZING shots the first two nights.  Okay so I'm also a bit jealous!   I did not really take any shots at camp as I was busy playing (but another gal did so I'll show those later) but my friend Vikki and I went up the pass on the day after camp ended and got these to share. These guys were skiing down the avalanche chute and had to walk to it in 60mph winds.  I kid you not I was in the truck taking photos with my long lens and could not keep it steady on the window much less stand outside (and honestly that wind was COLD). 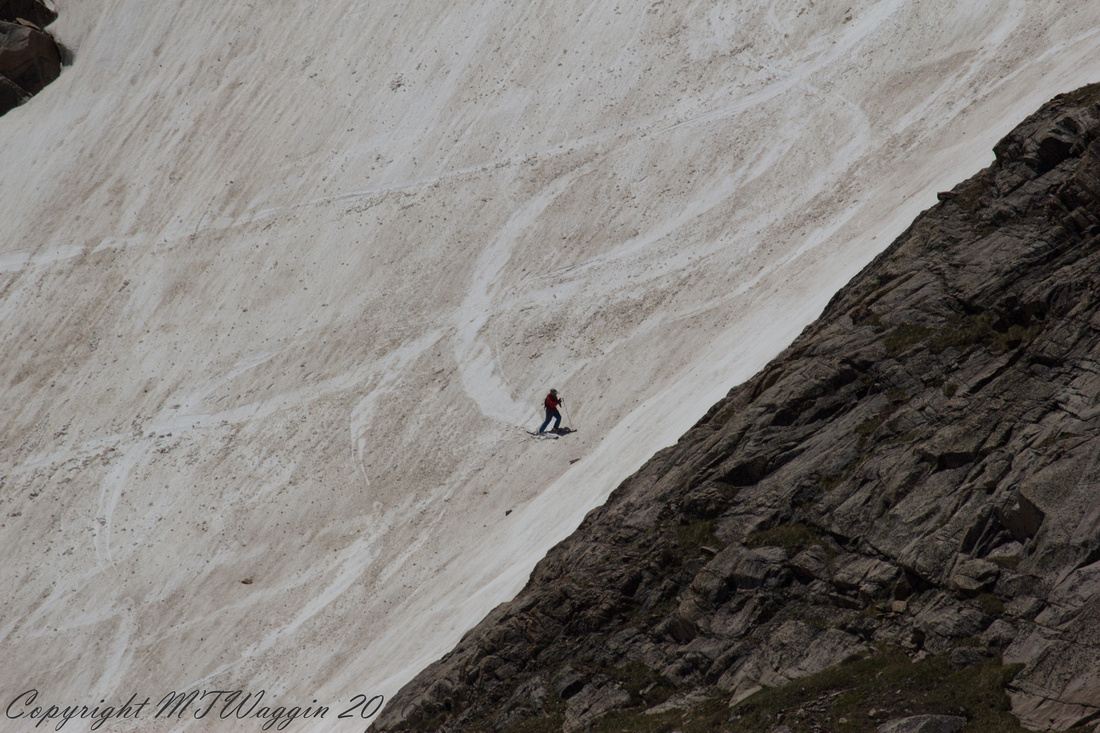 You can see where they were skiing in the photo below on the right side. 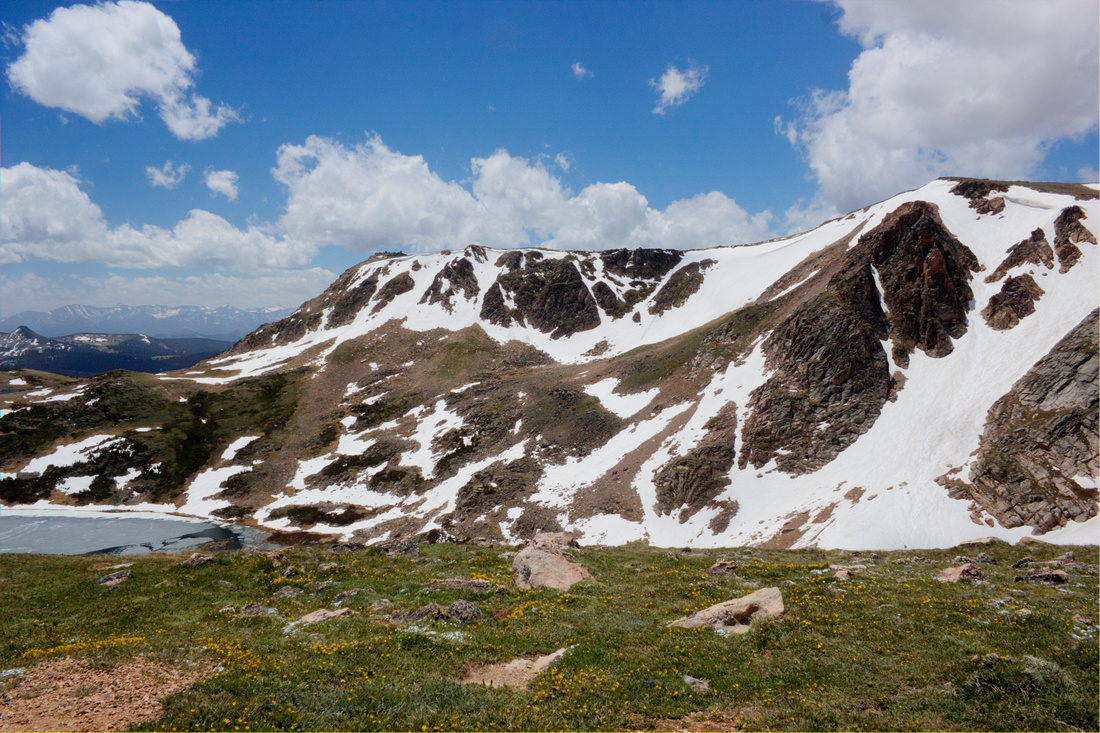 We lucked out and found that the campground at Beartooth Lake was still closed and the wind wasn't blowing there as badly so we took her 3 girls and my 2 boys for a wander (wanted to check out the campground anyway).  Yup made them pose for the obligatory hiking shot too!  haha  Left to right are Eureka (honorary auntie to Epic), Tin Tin (Gma to Epic), Nickel (Momma to Epic) and then Epic and Sterling.   Did I mention that a bunch of poodle relatives of Epic's (and their owners) traveled to join us at camp?   Oh yeah!  It was super fun! 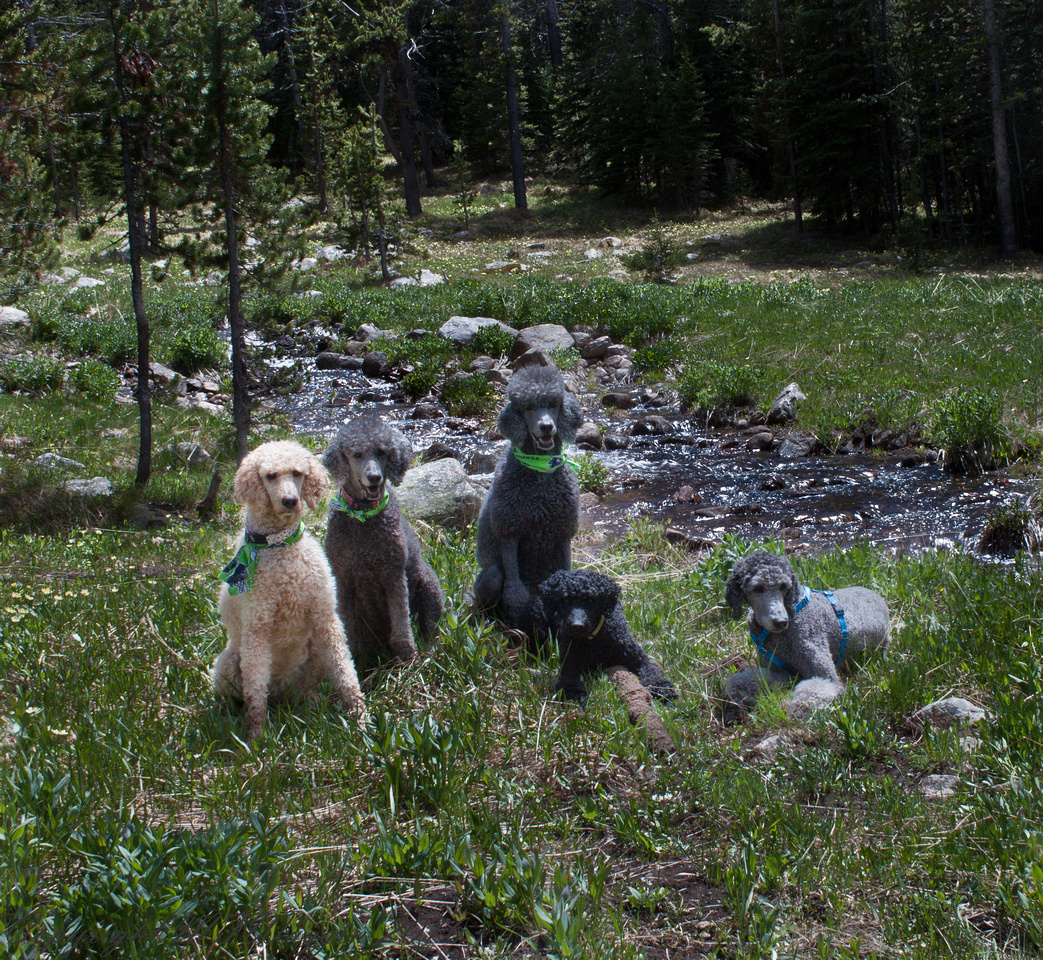 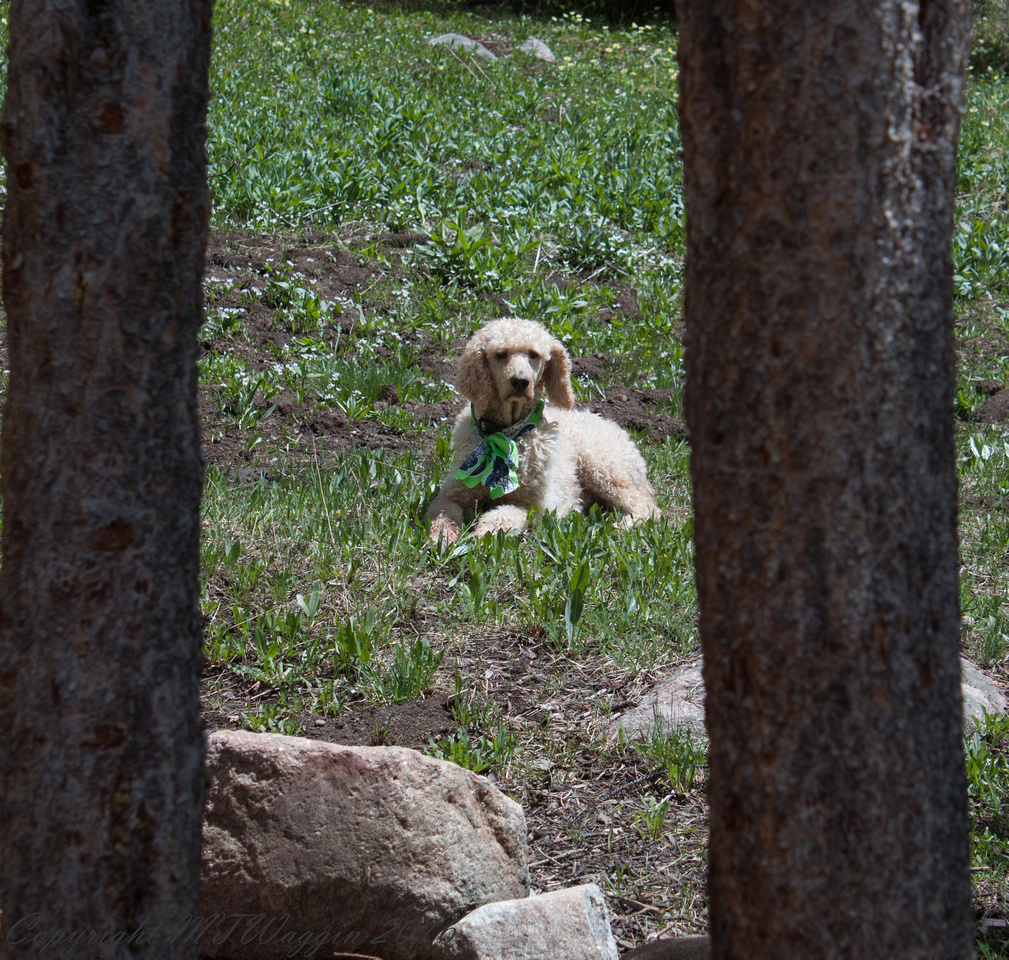 Vikki told me that Nickel has always had this thing for being dizzy (okay well we don't know that for sure) but she LOVES grabbing on to a tug and being spun around.  I just watched in awe and Vikki was right, Nickel loves this!    Just like kids that you spin around hanging on to their arms. 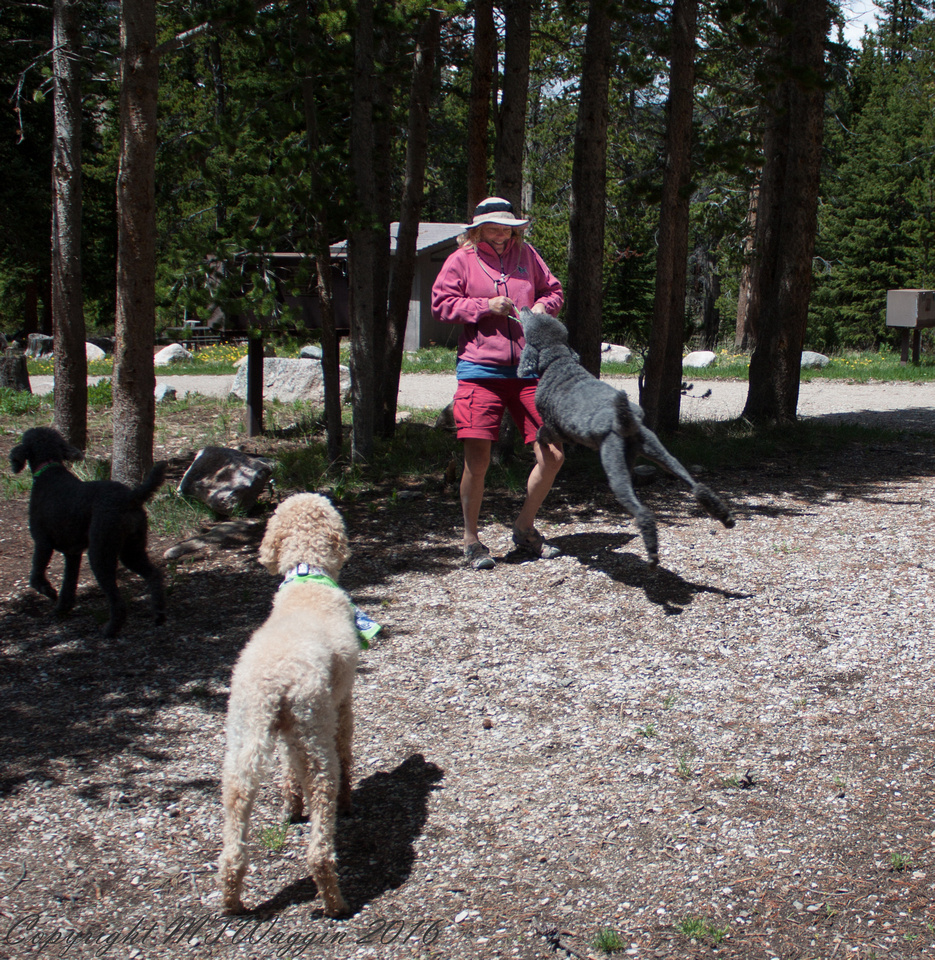 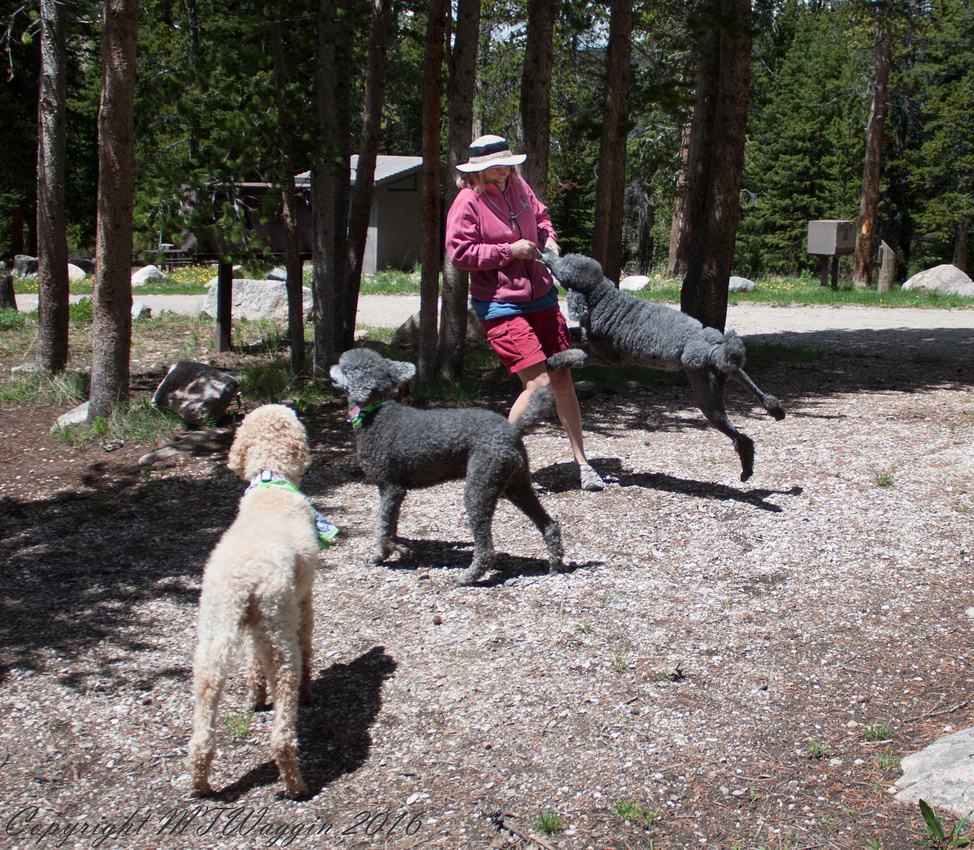 So that is the before and after camp report.  After our trip up the pass we came back to camp and napped.  It was heavenly!   I was then joined that night by my friend Robin who drove down to watch Epic dock dive on Friday and then she had some road tripping she wanted to do after we headed home.    So stay tuned for the camp report and photos.

Brian King Images
That is some stunning scenery! Looks like the dogs had fun!
Far Side(non-registered)
Glad your Mom came, the dogs love her and she will take good care of Magic! That is some great poodle family photo! :)
diane(non-registered)
Poodle fun. Great shots too.
Sue Bank(non-registered)
Hahahaha! Nickel spins like a good old pit bull! Love seeing the extended family! Glad you're back, I've missed reading your exploits. I'm glad you managed to pull Magic back from the edge. Its always a balancing game when they get old isn't it.
Linda Brown(non-registered)
Look at all those cute puppy dogs!