Today I'm going to share some information on my parental side of the family (my Dad's lines).    In particular my Great Grandmother Dorothea Caroline Fuhrman Gogolin.   She was my Grandma Rand's mother and is the lineage that gets me back to my Scandinavian (Danish) roots  that I see in my DNA results.

Honestly, almost all of the ancestors on my Dad's side are more of a mystery than most  simply because my Dad and his parents all died at fairly young ages.   In that arena though that is the side of my family I have done the most "digging" into in my research.

This photo is I think my favorite of Dorothea.   have no idea where it was taken or when.  Maybe it is the coloring on it but I generally think it is just that she looks relaxed and happy!    Ignore the little id on the bottom - it is wrong! 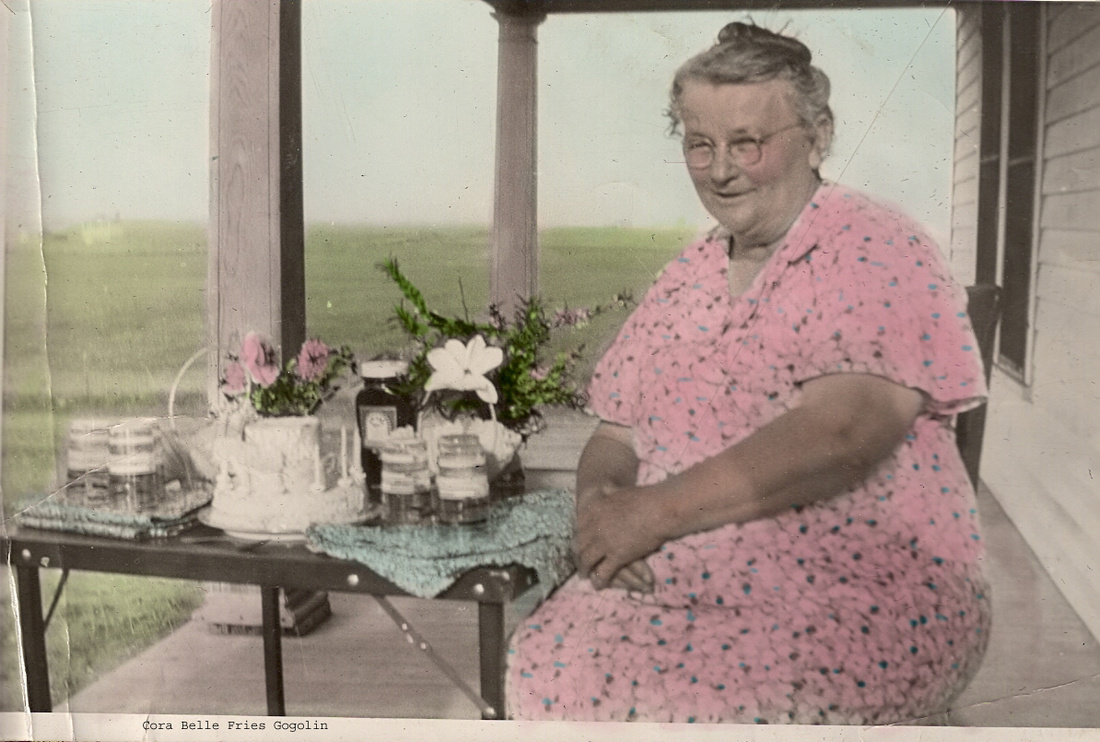 Dorothea was born May 1, 1880 in Davenport, Iowa to August and Maria (also noted as Mary).  She was the oldest of 3 girls as far as I can tell.   Her sister Emma was born in 1883 (in Iowa) and her sister Theresa was born in 1890 (in South Dakota).  By the standards of the time, Dorothea's parents was "older" (as in 29) when Dorthea was born but more about her Mom in a later blog post.

She moved to South Dakota with her parents and sister in about 1883 when she was only 3 years old.   They landed in Hutchinson County which is in the southeastern corner of the state.

The SD census dated June 1, 1885 shows the family living Hutchinson County, SD, Township 100, Range 61.  The household shows her Dad was farming, her Mom was listed as Land Lady with the 2 girls.  Also listed in the household was H. Fuhrman who was listed as Father and is 75 years old.  That would be Dorothea's Grandfather on her Dad's side - Heinrich.   Both of Dorothea's parents and her Grandfather are listed as being of German descent (just goes to show not all information given to a census taker in those days was accurate - and probably was dictated by the head of the household).

This is a later picture of Dorothea and her parents and sister. 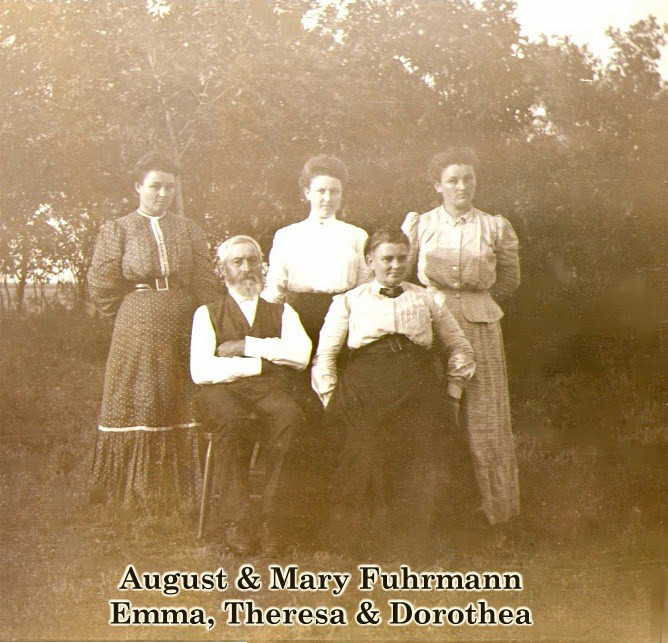 On November 10, 1897 at age 17, Dorothea (also called Dora) married Karl Gogolin.  We assume they were married in Hutchinson County.   Karl was 27 and had immigrated from Poland.

The next bit of information I find on them is from the 1900 Federal Census taken in June 1900.  Here we find Dora and Karl living near Howard township in Charles Mix county SD not terribly far from where Dora grew up.   Karl is working as a farmer and they own their own place!  In that census is our first hint of Danish ancestors in that Dora's father's birthplace is listed as Germany but her mother's birthplace is listed as Denmark.   It also has listed the first of the couple's children Martha and Emily (Millie).   It also shows that Karl's parents Paul and Eva (both in their 50s) were also living with them.

Also on the 1900 census household 122 and 123 are Dora's sister Emma (married to Karl's brother Andrew) and Dora's parents and her youngest sister Theresa.   All also farming on their own property.

I actually just came across this photo of the whole family at Dora's parents place in 1902.  I was really impressed at the beautiful brick house.   Wonder if it still is standing. 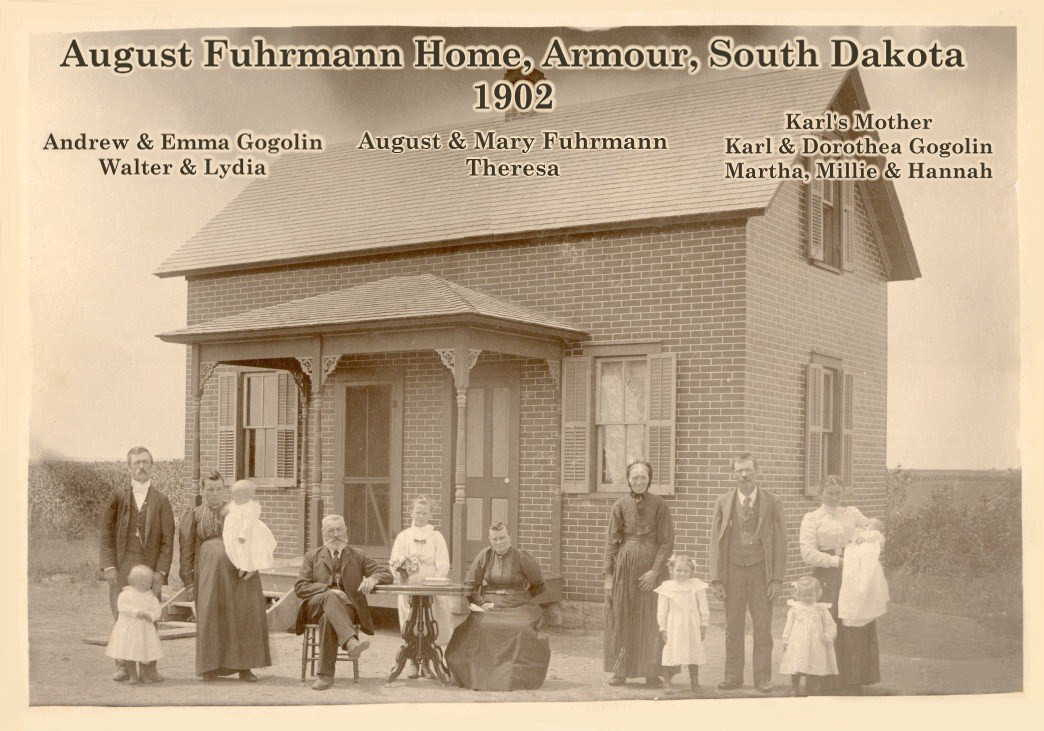 So there you see on the left Dora's very pregnant yet holding another wee one, sister Emma and her husband (Karl's brother) and their two children, Dora's parents int he middle with her youngest sister, and Dora on the far right with new baby Hannah next to Karl and his Mom (remember in 1900 that Karl's parents were living with them) and the two girls. 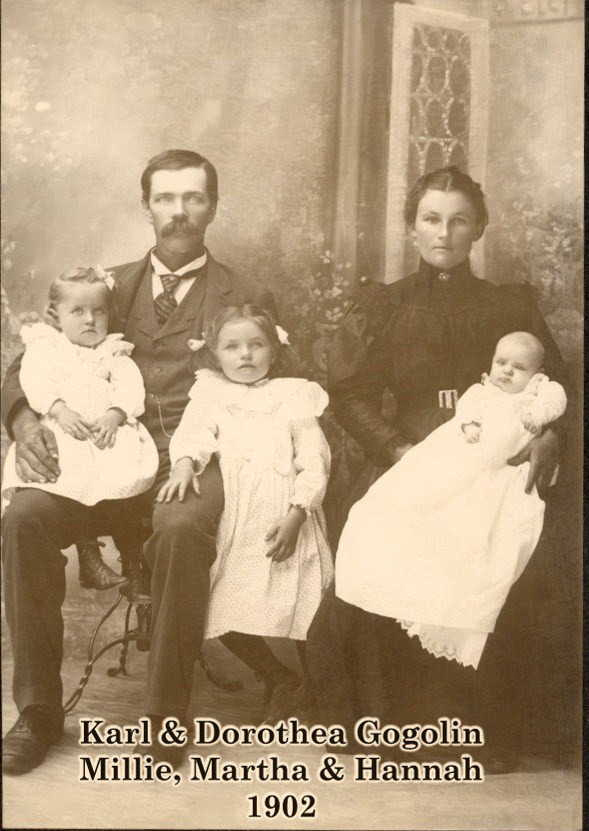 In 1903 based on census records Dora had yet another baby girl (#4), named Joehana but I think truly this was Helena who was born August 17, 1903.    Spelling gets  crazy in some of the census records. 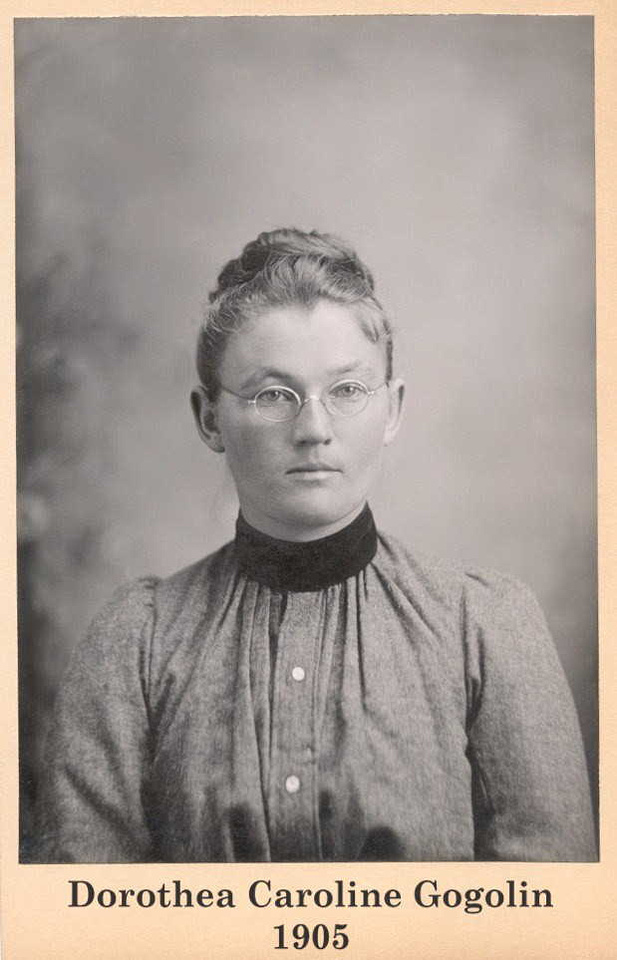 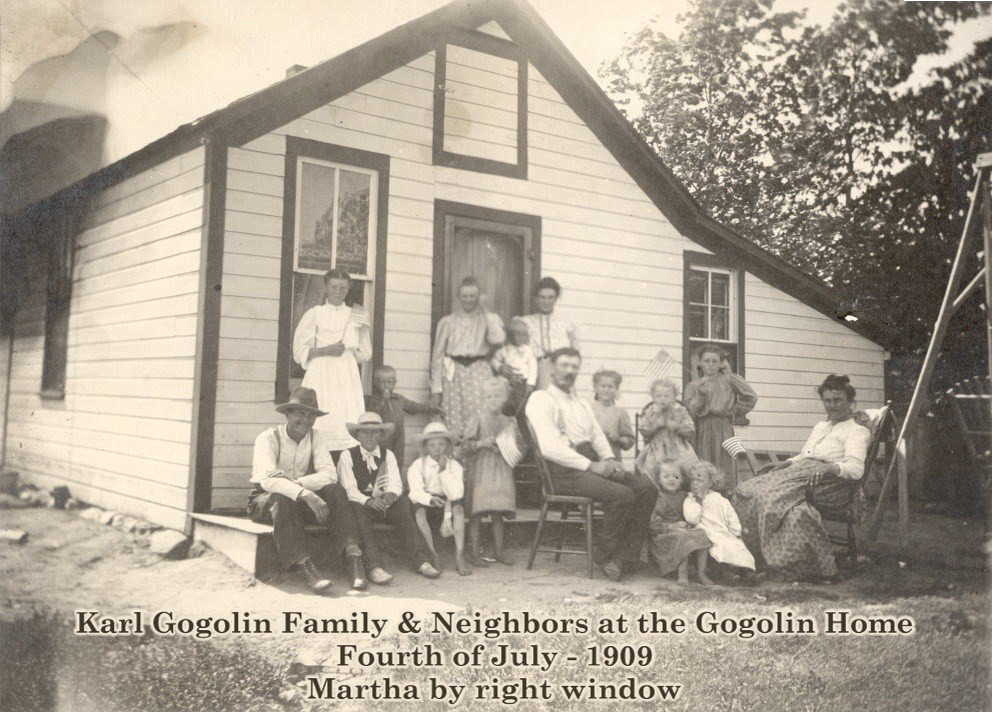 Still living and farming in Charles Mix county, Howard township in South  Dakota in 1910 the Federal census shows Dora and Karl's location # is 124 and they own their farm.  Interestingly  the 3 oldest girls (11,9 and 7) are listed as farm laborers as I am sure all the children were in one sense or the other.

That same census shows us they are living right next door to Dora's sister Emma who has been widowed (she was married to Karl's brother remember) and her 7 young (<1 to 10 years old) children.  Emma sadly is only 26.  Based on the census data she does own and still works their farm.  Her husband sadly had died on May 19, 1908.

Here is a 1906 map of land ownership that shows where the two families farm property was. 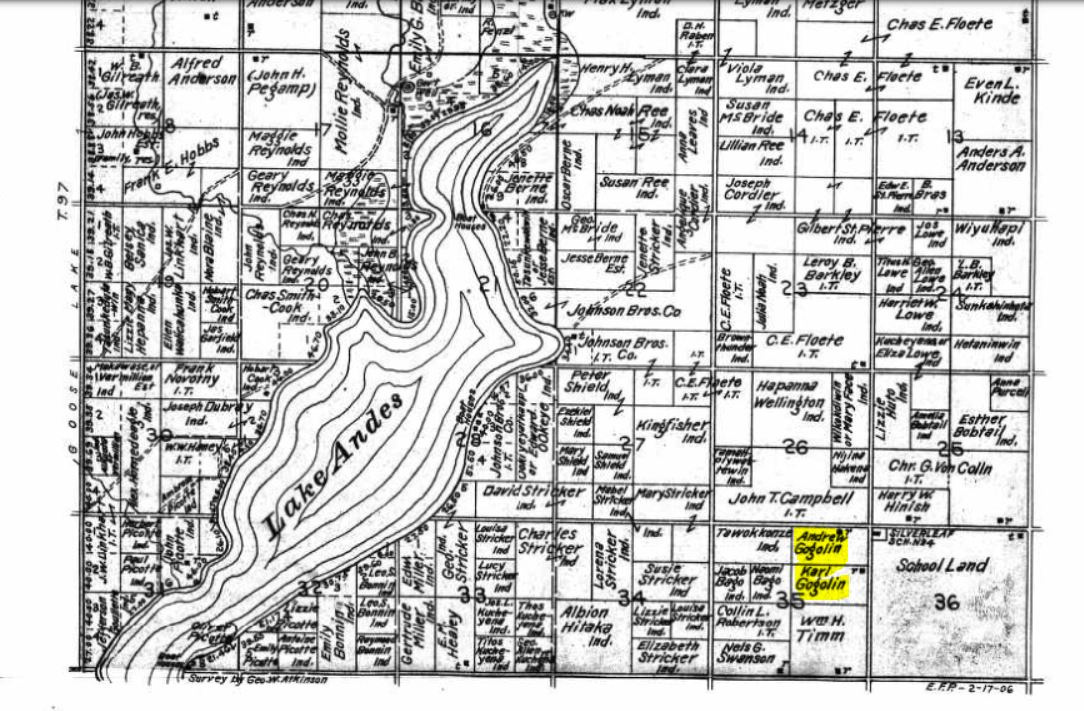 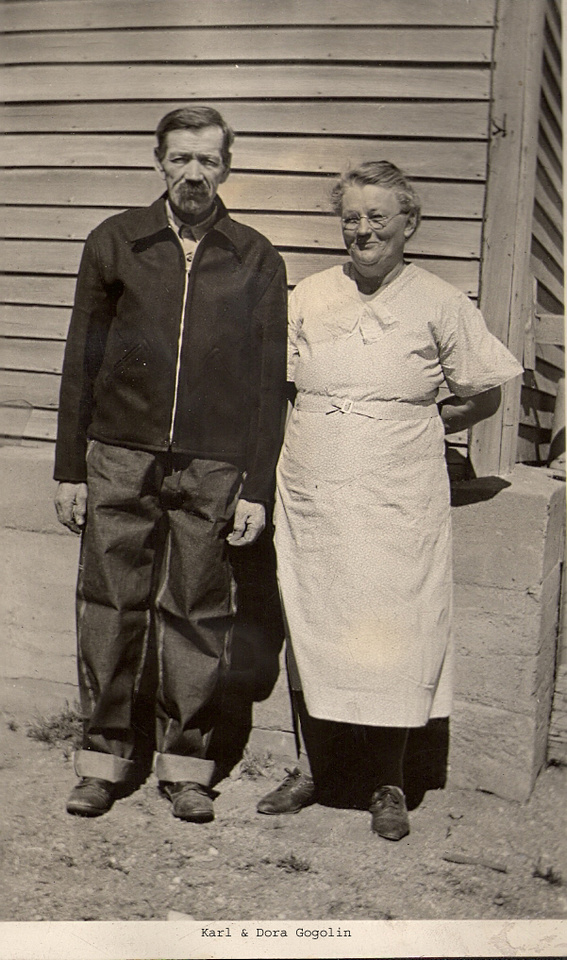 Hang in there with me - this couple had lots of children!

Finally, March 1, 1915 my grandmother was born and named Ruth Eleanor.

Son #3 was born on May 20, 1919 and was given the name of Martinus (which showed with numerous spellings over time). 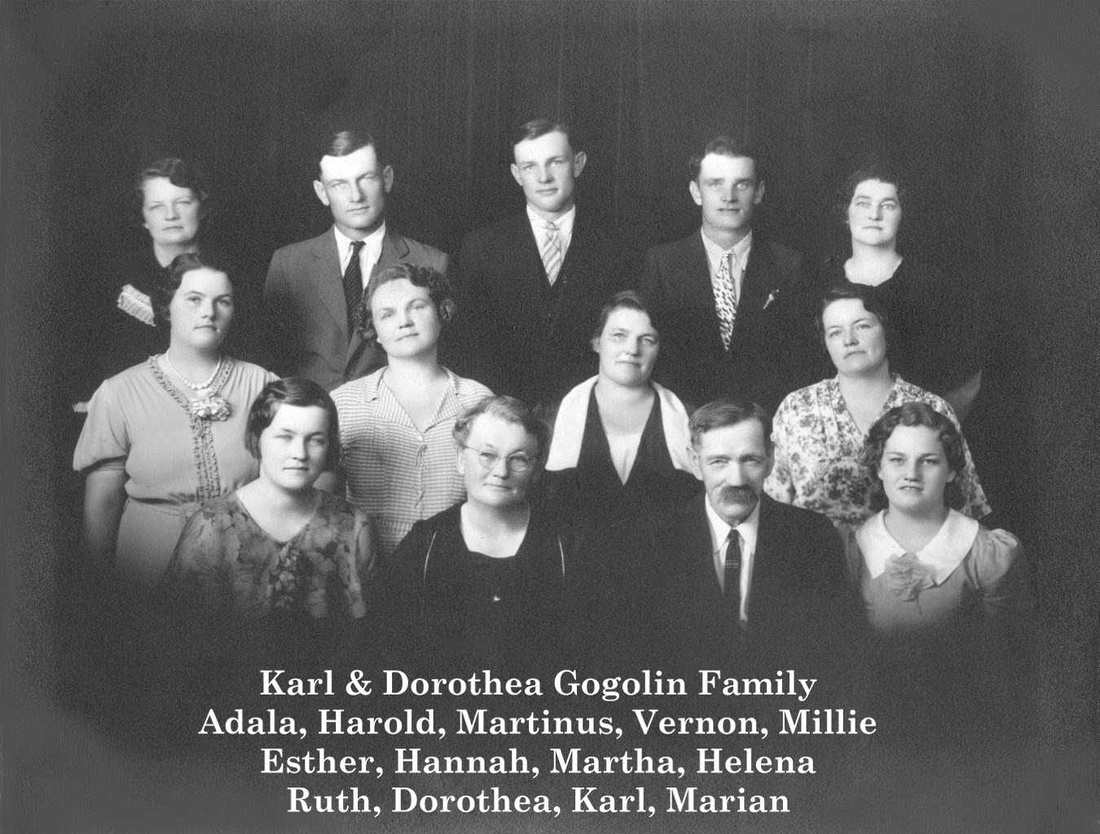 The 1920 Federal census now shows the family on a farm in Wolsey, Beadle County, SD.  There is no occupation listed and the census doesn't have the detail of the previous one.   I wonder how/why they moved?   I wondered where Emma would show up  (often family dictated where people moved to) and in 1920 census she is now in Harrold, Hughes County, SD with  8 children (including a son-in-law) and a 22 year old boarder.

I know that Dora and Karl lived in Wolsey a very long time as my grandmother Ruth graduated from Wolsey High School.   The 1930 Federal census shows them still farming and working their own property.  By then all the kids were gone except for Esther, Vernon, Ruth, Martinus and Marion.

In all Dora, bless her heart birthed and raised on the farm 12 children starting when she was 18 and birthing the last one at age 41.  Holy COW! 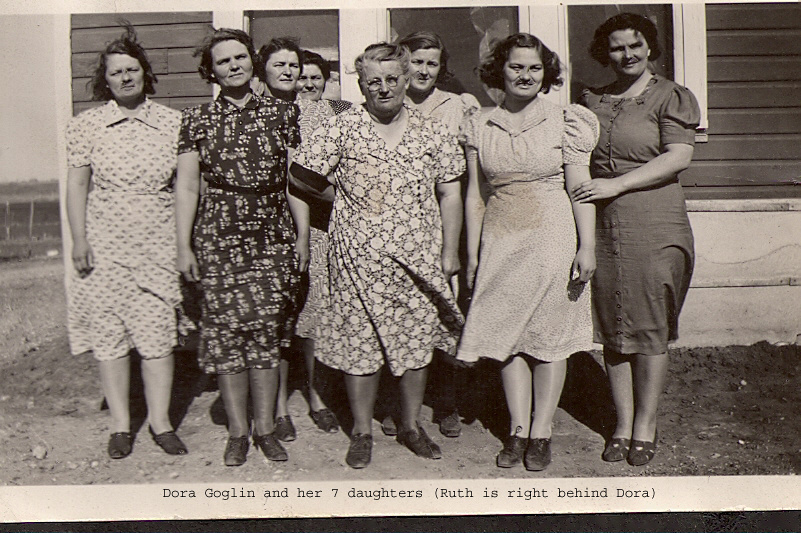 Dora lost her husband Karl on September 28, 1939 when she was 59 years old (told you I lost many on my parental side at a young age).  Dora  also outlived her daughter Amelia Emma (Millie) who died August 30, 1951. 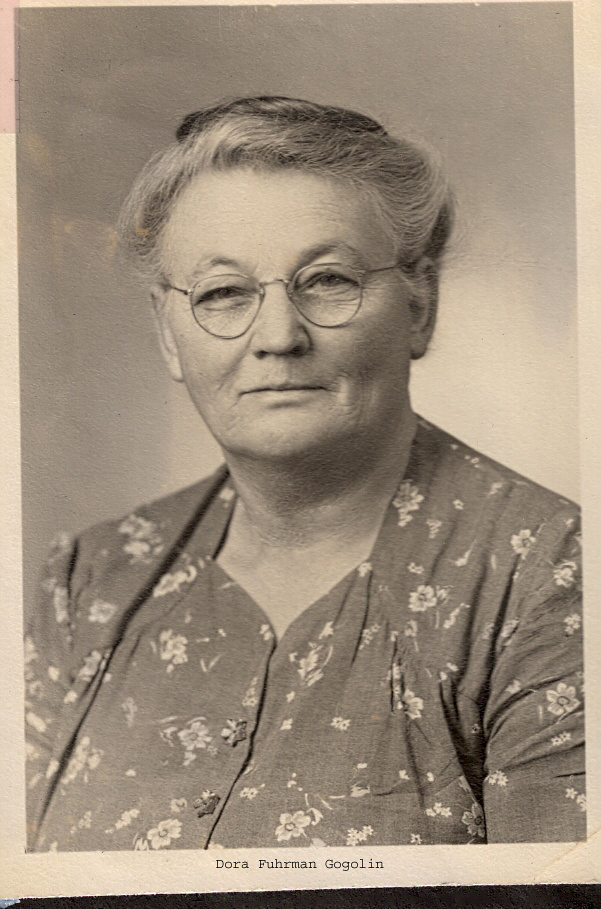 I wish I could have met her.  Looking at the photos and knowing my grandmother, I bet she was just a kind and gentle soul.  There was always a relaxed smile in her photos.

Lori(non-registered)
I'm sure at some point your family and Mike's family crossed paths out in eastern SD. He worked in that area fixing pipe, and he sister lived about 15 miles away at one point. Dora reminds me alot of my grandma Bond - you know she had a hard life, but she also had joy along with the heartache.
Far Side(non-registered)
I love the colorized photo they did that quite a bit in the early 1940's. She looks like a kind lady, I enjoyed seeing all the old photos:)
Diane(non-registered)
Wow what an interesting family. Dora was a champion bringing up all those children
You are lucky to have found all that information and those magic photos.
No comments posted.
Loading...
Subscribe
RSS
Recent Posts
July 19-31, 2022 Week of July 10, 2022 Week of July 3, 2022 Week of June 26, 2022 Week of June 19, 2022 Struggling with Titles Dogs and Friends and Parrot and Projects - Oh My On To Summer (Projects Galore) Crazy End to May Project - Iago (first steps)
Archive
January February March April May June July August September October November December
© MTWaggin Photos & Blog
Powered by ZENFOLIO User Agreement
Cancel
Continue