But I am hoping we are over the hump.  Sterling was sick Saturday night, Epic Sunday night and Teddy is just generally having times where he isn't eating either because he hurts or tummy isn't good.   That is ongoing but the sick big dogs wasn't fun.  I am hoping that the others are going to miss out on it as often this works like your kids - when one gets sick the others do in succession - not all at one time but one at a time to make Mom suffer more!  Monday night things finally calmed down and Teddy was enticed to eat with the addition of some of my spaghetti burger juices (before sauce thank you).  This was the after dinner "coma" shot. 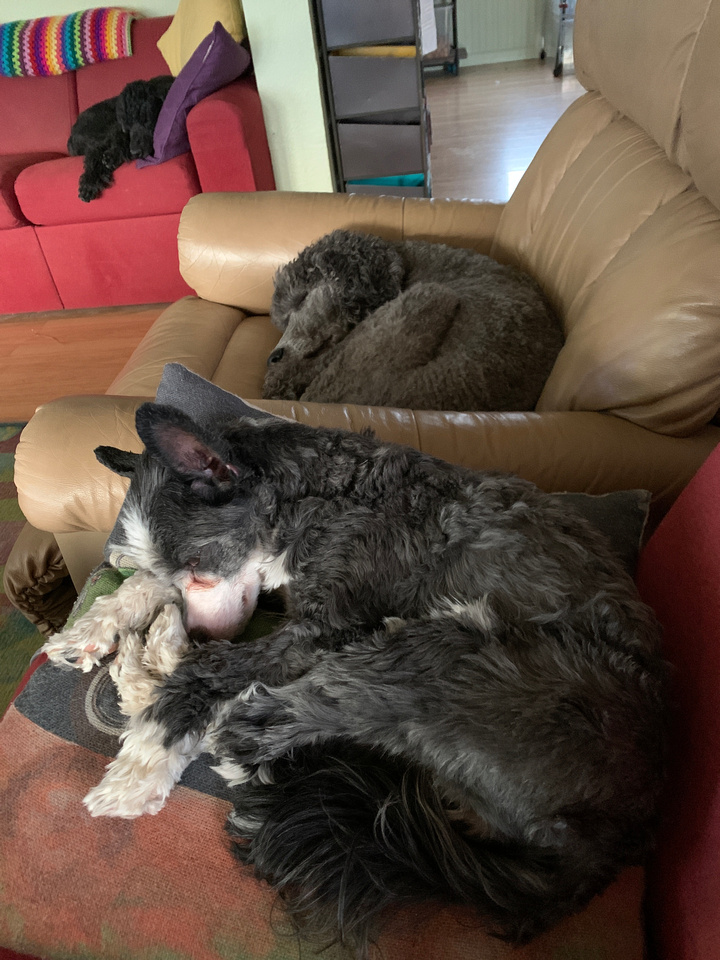 Monday deliveries included a set of new dog crates I ordered for the travel trailer.   I ADORE my Impact dog crates (purchased for in the truck) and the size was perfect (my brother calls them the "bank vaults") but I don't want to constantly have to move them in and out between truck and trailer when we are traveling.   I could NOT for the life of me find crates that had those dimensions - all were either too small (too skinny and short in height) or as big as the wire ones I have in the house (which truly could fit 2 of the little dogs).   I just wanted the dimensions of the Impact crates but not the cost.  Laugh all you want but additional inches of floor space in my trailer does make a difference.

Now I don't know about you but do you find that the internet search engines do a REALLY poor job searching for an item with specific dimensions?   Days and days I looked then came across a crate that is really new to the market (like in the last year or so) and was the right dimensions.   I decided to give it a go and order them.    They arrived yesterday and here are the photos....my first impressions are below as well. 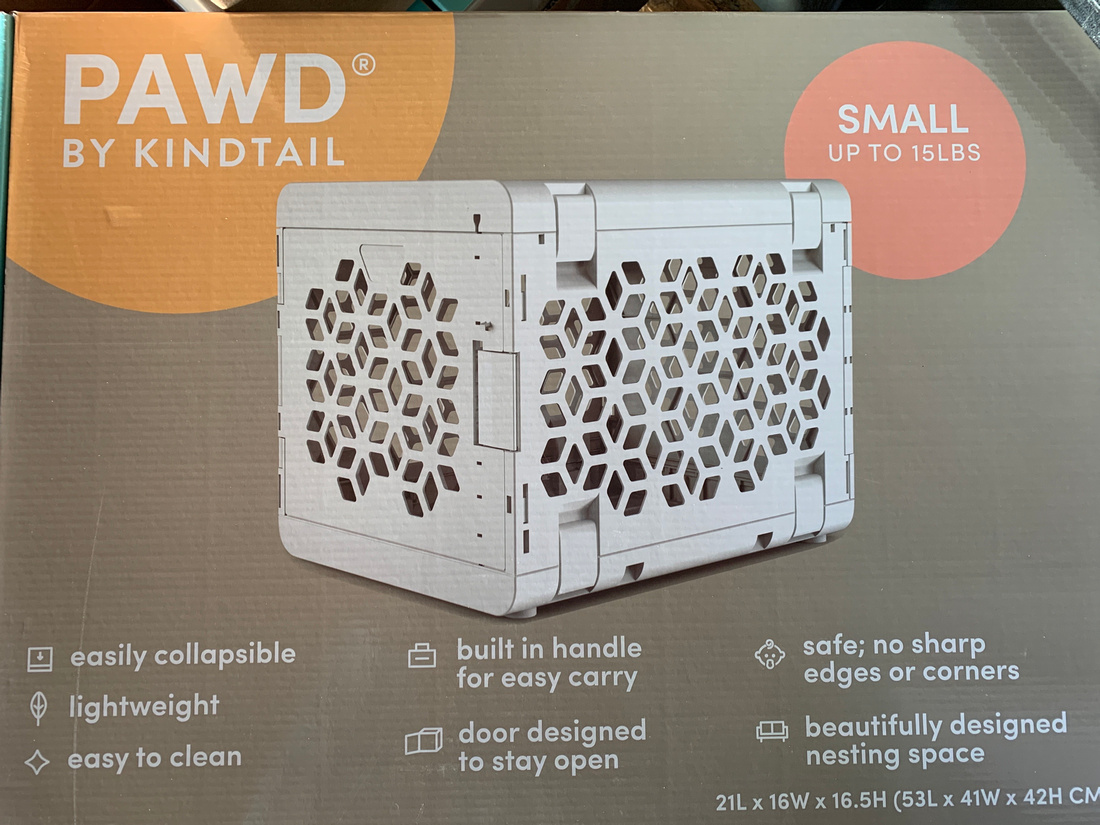 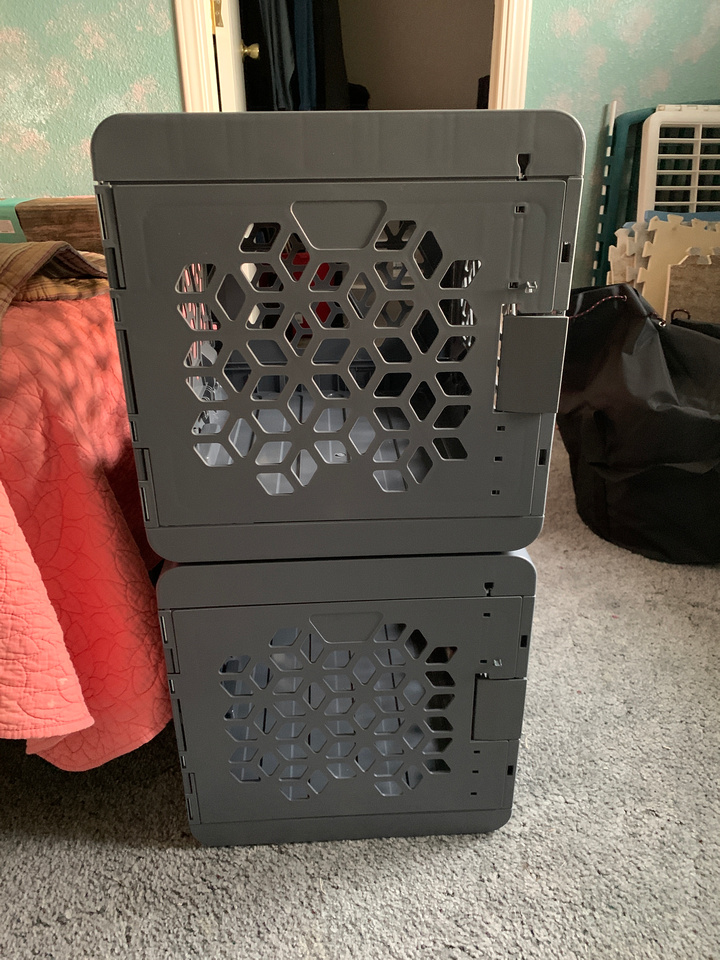 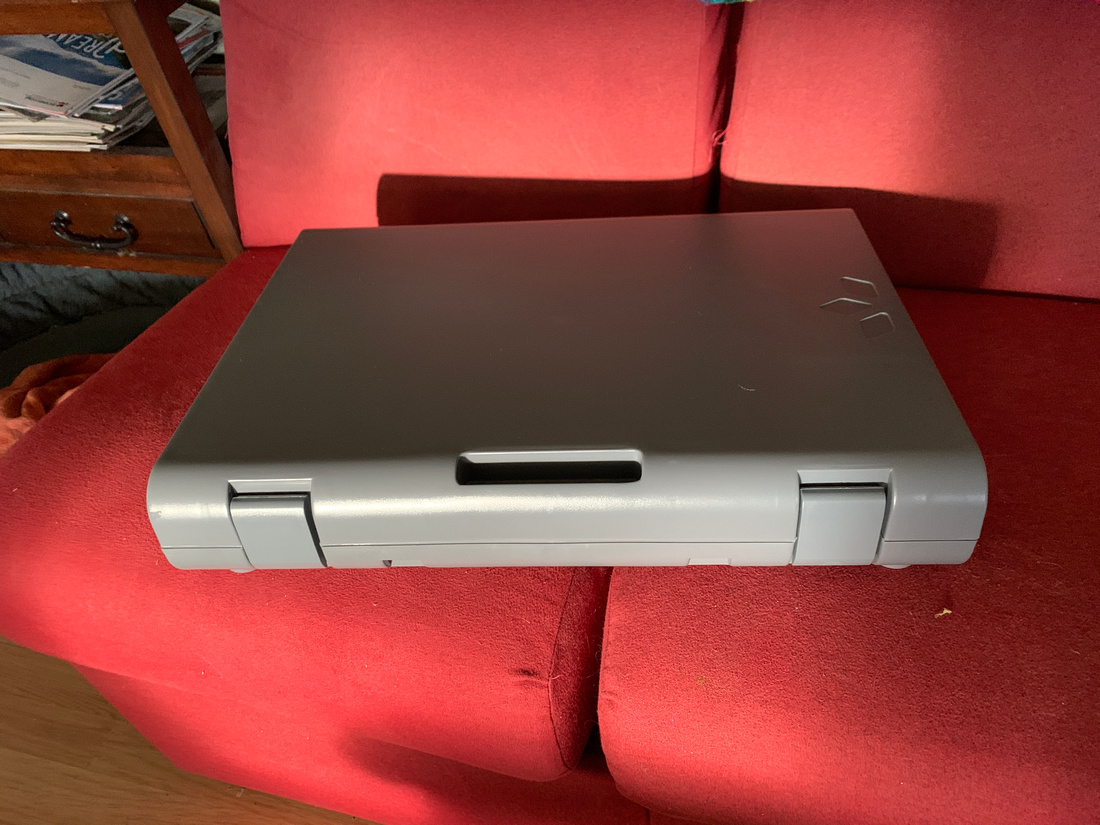 Super cute packaging (the boxes) and because they are a hard plastic (not like normal plastic crates that have some give) I was worried about them arriving in the cold and getting broken.   I still believe that "could" happen.    The last picture is how it looks all folded for transport (which we won't use).  It is light weight and the handles do not go all the way thru, which means you have to carry it in your hand.  No biggy really.   Remember these are marketed for the "dog showing people" but more for the occasional traveling person with one or two dogs.   It is not marketed nor would it be impact resistant (for cars) however is more "dig/chew proof" than a soft crate would be.

All parts, as with folding wire crates, are folded together WITH THE EXCEPTION of the top which is separate.  It was a bit tricky/finicky to get together as well (I had seen comments about that).  Again, for me, since they will go up and stay up not a big deal.   If I were assembling and disassembling all the time - it would be a big thumbs down, too futzy and time consuming.

Once together my impression is - not as sturdy as a wire crate for sure.   Most surely only for dogs that are crate trained.   I was not impressed with the door mechanism.  It doesn't latch as securely as I think it should (let's be honest that is where dogs will look to escape from first).   I also am not 100% sure that my ripping and shredding terrier terror monster will be using one of these or will get another "bank vault" (let us remember he has destroyed the plastic trays in the wire crate bottoms).  We just have to see how it holds up.  These also are NOT stackable (although I will stack them in the trailer I'll have to do some creative securing to make sure they stay put).

Now all that said, these were NOT cheap, are made in China and had I not been looking for very specific dimensions - I would not have gone with these.  If I had been a millionaire I would have invested in some more Impact crates but I got 4 of these for the cost of one of those.   I would not get these for toting back and forth ringside at shows either for the time needed to assemble AND I just don't think they'd hold up.   We will use them this year in the trailer and just see how they hold up.

Now that you are all bored here is some funny for you - I don't know if I mentioned that Oliver has truly come into his own in the "Adolescent Boy Dog Monster Child" realm.   So when I stopped at World Market in their holiday clearance isle I found this.   HAHA! 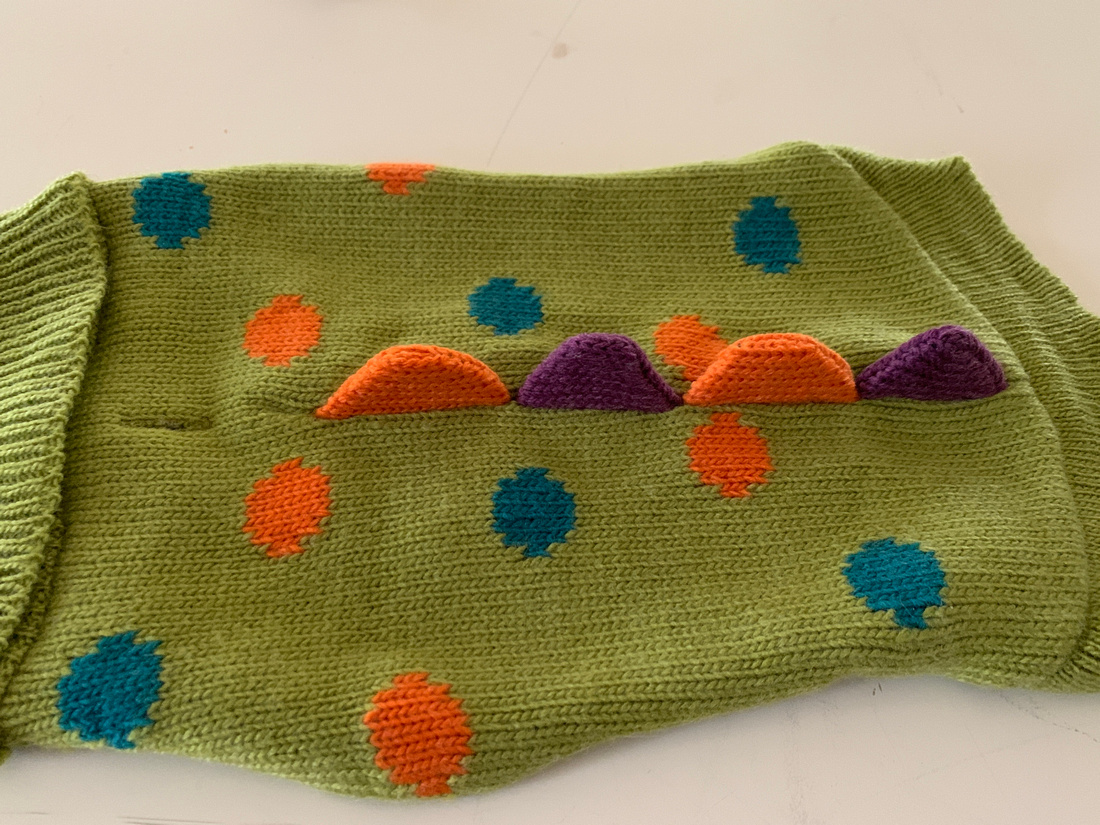 So that's my story for the day!    We have enough trips planned for this year that really the upgrading of things for the trailer (and the stuff for the truck since I traded) are high on the list.  Yes my house improvements are too but hey, can't think about that in the cold as easily as "vacations".

I am thinking I may start trying to do some history blogging on some of my ancestry stuff I've done here and there too.  I'll try to title those blogs somewhat the same so you can find or skip them.  :)

Far Side(non-registered)
I know space is a big deal for you in the trailer, Looks like you did well with your choice, hope it works out. Cute doggie sweater!
No comments posted.
Loading...
Subscribe
RSS
Recent Posts
July 19-31, 2022 Week of July 10, 2022 Week of July 3, 2022 Week of June 26, 2022 Week of June 19, 2022 Struggling with Titles Dogs and Friends and Parrot and Projects - Oh My On To Summer (Projects Galore) Crazy End to May Project - Iago (first steps)
Archive
January February March April May June July August September October November December
© MTWaggin Photos & Blog
Powered by ZENFOLIO User Agreement
Cancel
Continue