Hope everyone had a great Thanksgiving and found an abundance of things to be thankful for even with the current state of the world!   Me---well thankful for friends, family, dogs and hearth and home.   I was blessed to be able to go spend the afternoon with a long time friend in Bozeman  who I haven't seen in well over a year.   Her family had taken off on a camping and climbing adventure and she was home manning the farm.  Chores have to be taken care of as we all know.

I decided that I'd take off a bit early on the gray cold day and hope that the wind we were seeing at home wasn't going to persist for the entire trip.   I had a plan...I wanted to go back to a spot we found the previous weekend and pick up more rocks (with a bonus of a stash of new fetching sticks for Epic that will stock the truck).    I was thrilled that we got to the lake and although it was cold there was no wind.   Epic, Josie and Sterling were riding shotgun.

What a difference a week makes in the scenery. 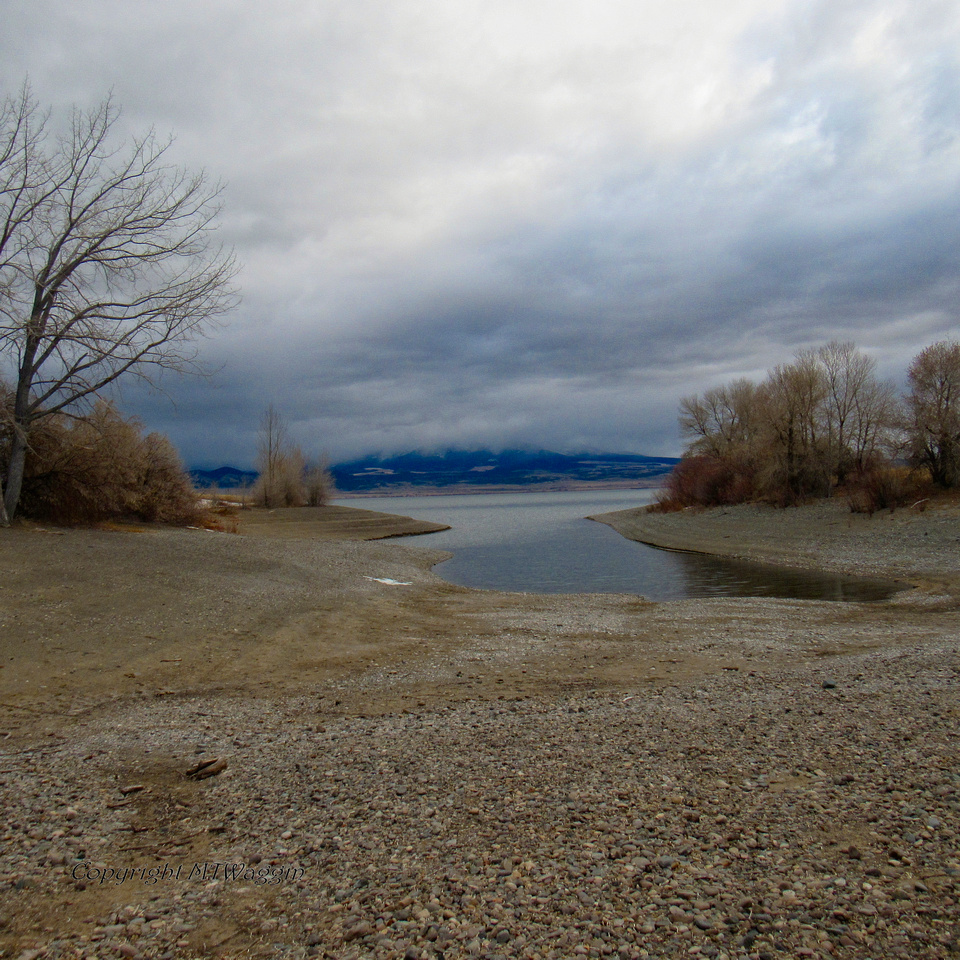 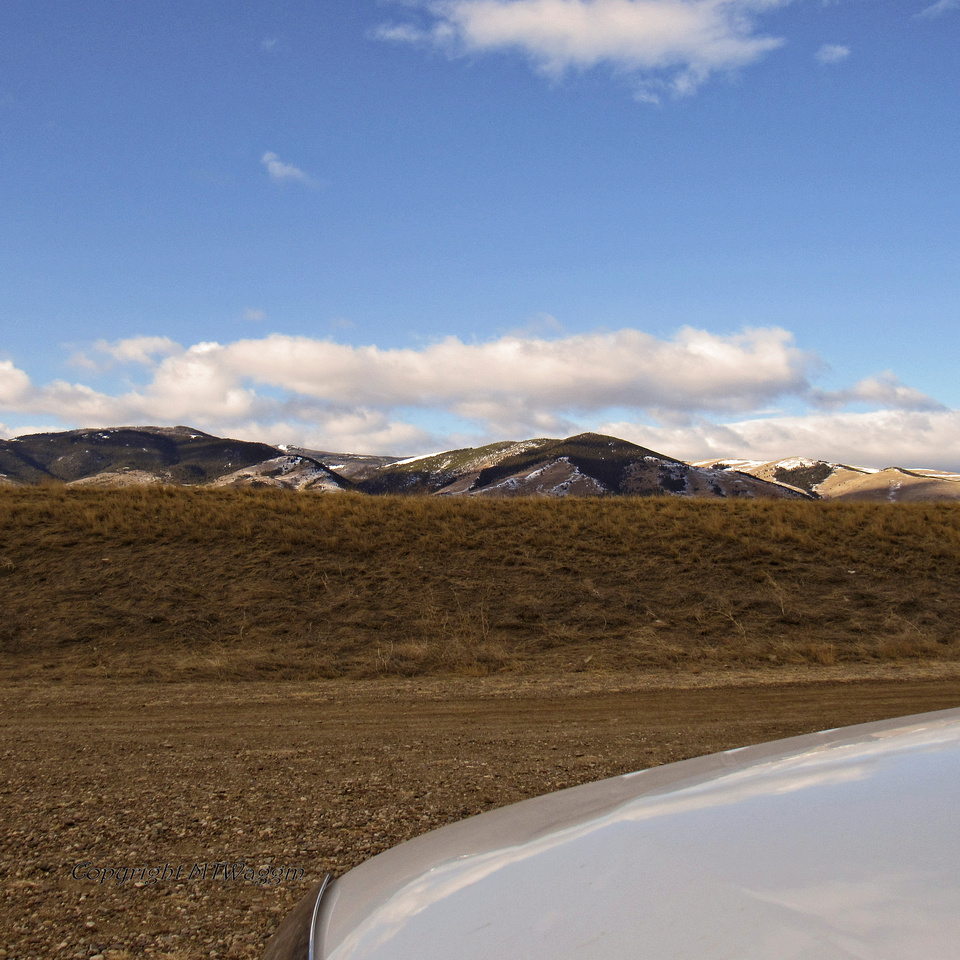 This poodle cannot for the life of him stay out of  water - no matter how cold.   I was NOT going to entertain the idea of swimming though so he waded around being whiny. 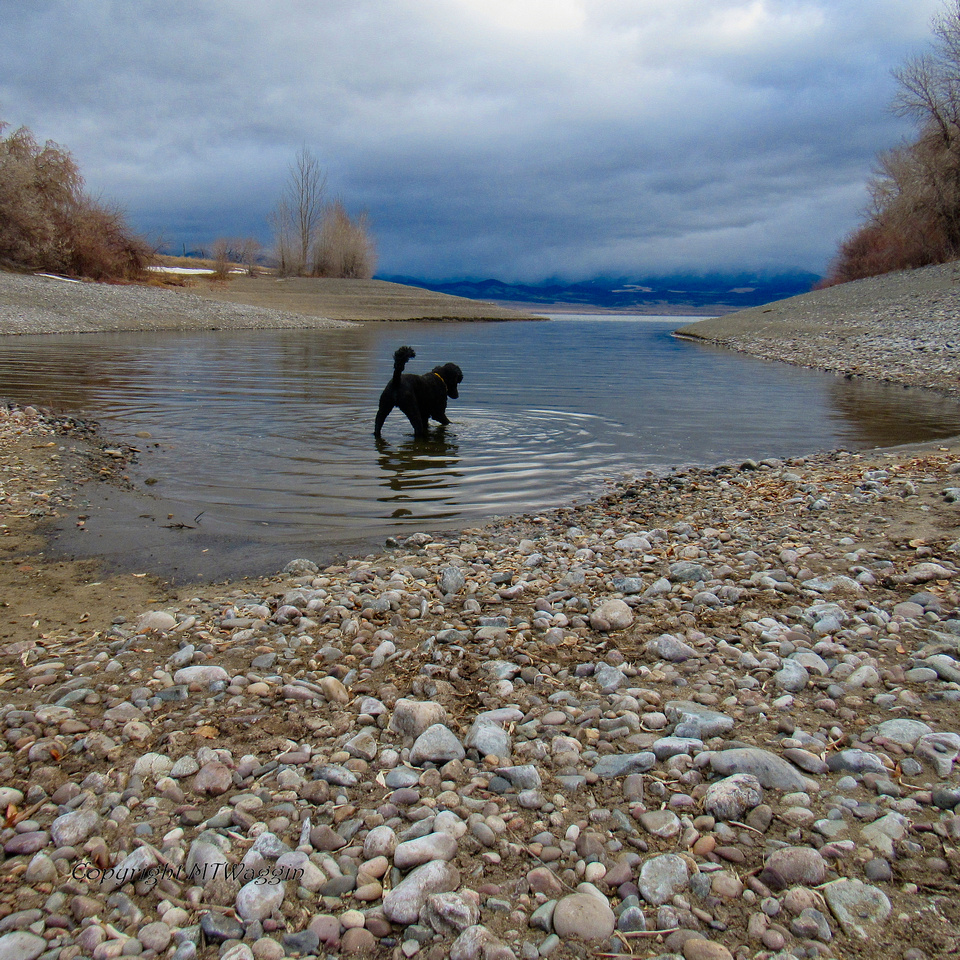 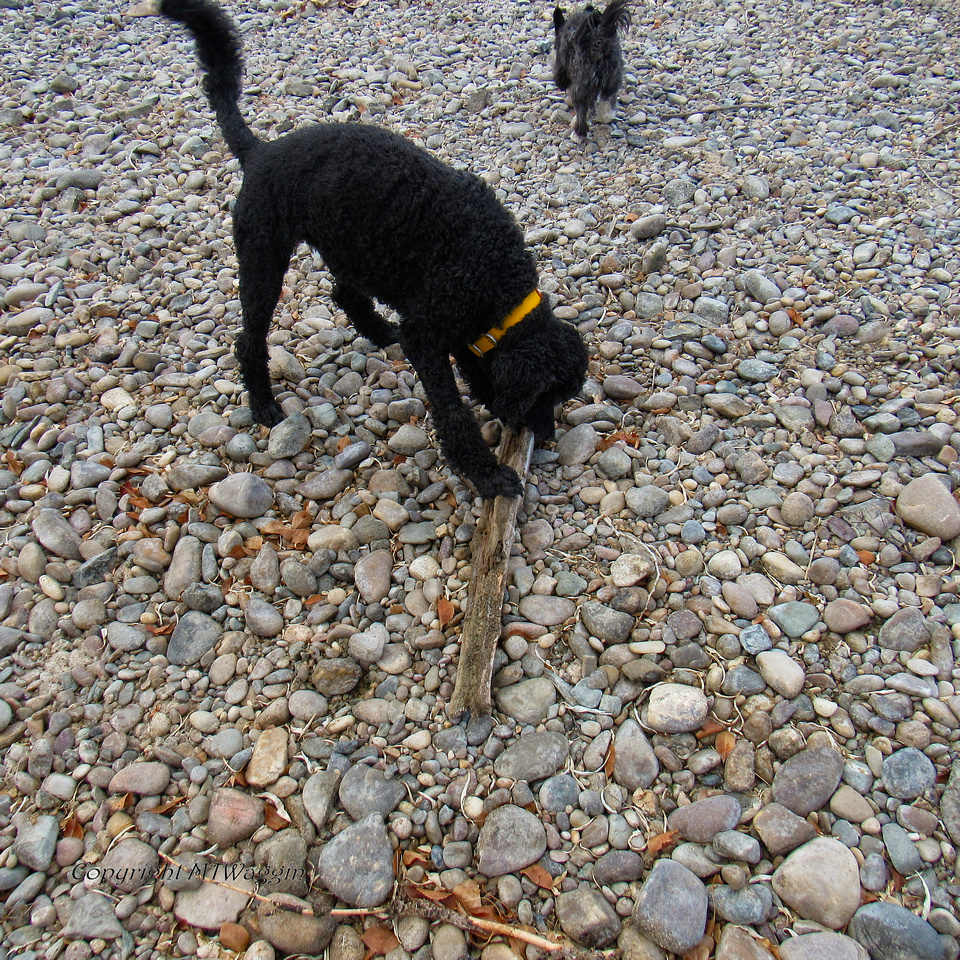 They were both sure there was stuff in the bag (it was rocks) they should check out! 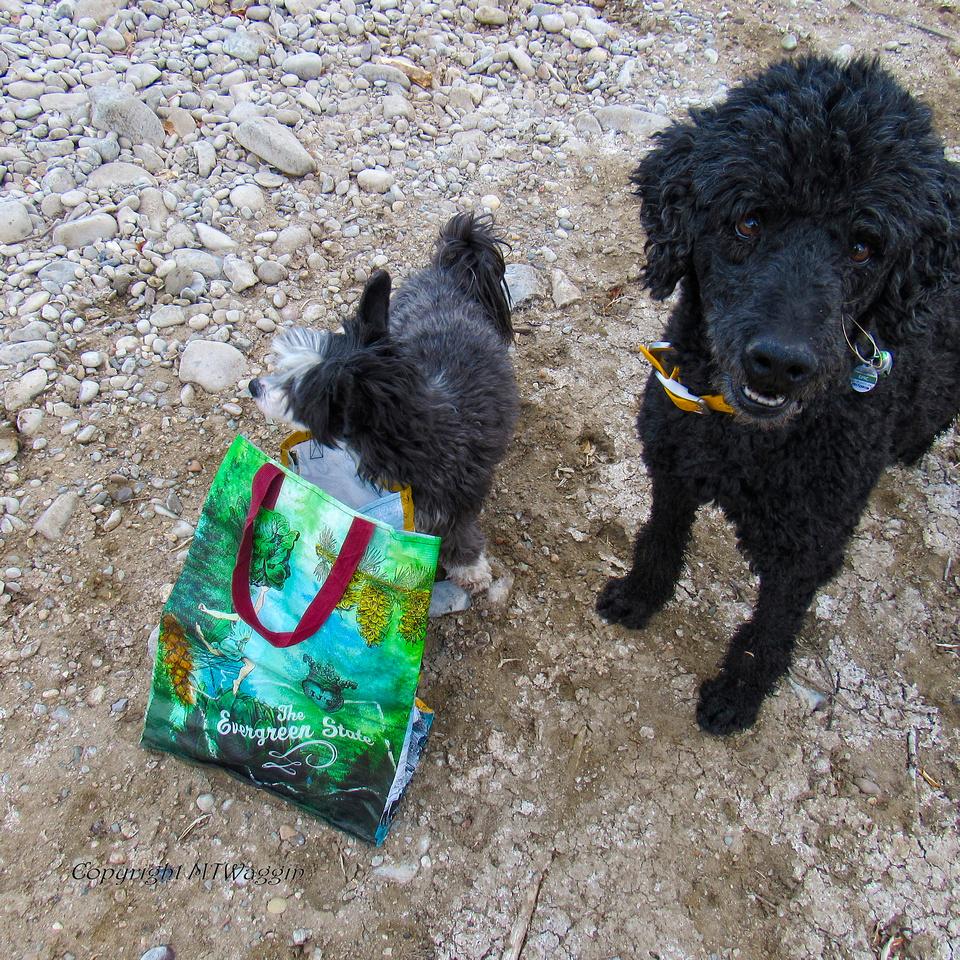 Josie meanwhile immediately was on the picnic table out of the truck!   Goofy girl. 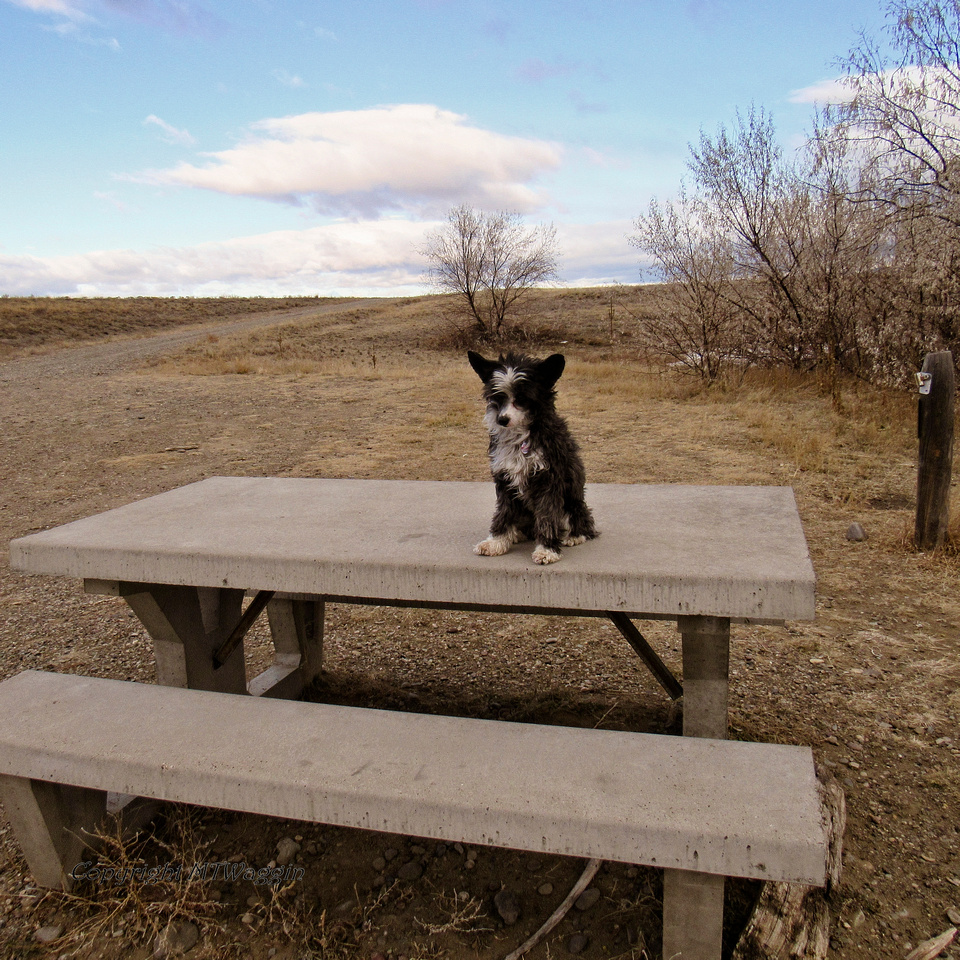 We wandered around the campground and the lake edge trying to avoid some weird guy who was riding around the campground loops on his 4 wheeler.   Honestly he was giving me the creeps as it seemed like he was following us - so we headed closer to the lake to avoid him.   He persisted then had to make sure we knew that he'd seen a moose down there the past few mornings (with a comment that he had a photo  from 5 feet away - THAT I doubt).  I said we'd not seen any sign of moose and we headed back to the truck.

It was a glorious visit with my friend and we made it home just as it was turning dark.

Meanwhile I'm keeping up my walking.   Finally mapped out the distance on my local walks I do in the neighborhood.   As always some aren't as far as I'd thought BUT I also get the bonus of up and down hill for the entire walk.   Now I know.   Epic hasn't been thrilled at having to walk on leash but when we do the loops he has to and right now, with construction on a house going on down the road from us we have to watch out the the builders who drive like maniacs and do not pay attention as they should - or slow down.    We did have one morning where there was a snow something so there was a few pellets left on some of our cactus (we gotta watch out for those when we cut through the back). 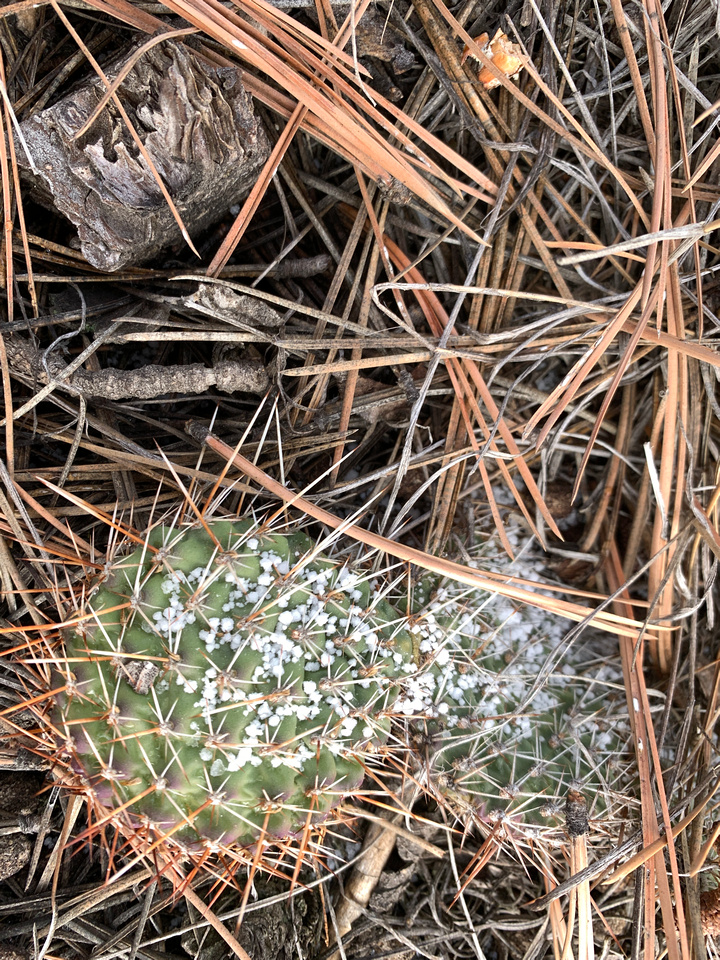 Started a meditative painting project with those rocks I collected.   I am going to contribute to the happy rocks that people do and just place "around".  I want to do some for camping next year and wouldn't you know it when I went to the bank the other day, there was a penguin painted on a rock sitting on one of the driveup posts!  Made me smile.  My understanding is you are welcome to take the rocks (and I think campground kids would love that) if it makes you happy and then when you are done, place it for someone else to pick it up.   I'm practicing dot painting on them right now and will work towards doing some dot mandalas in the future but for now they are pretty basic and great practice!  I'll share when I get some more done.

For now though, I am trying out Sue's Eggnog Pumpkin pie (in the oven and smelling yummy), going to watch some TV and oh - I forgot - what I saw in the photo in the previous post - a triceratops skull!

Far Side(non-registered)
Oh your Josie is so cute! WE miss having a dog.
My daughter bought some kind of a form for painting Mandelas on rocks. I like the ones with messages myself. There was one outside the Clinic door it said "Never give up!"
I would like to get over to Lake Superior and get some weather worn rocks:)
Diane Bohlen(non-registered)
Lovely scenery and the dogs are cute. That guy sounded a bit creepy. Take care.Glad you could have a catch up with a friend.
Sue(non-registered)
Hope you enjoyed the pie, I love recipes that taste good and are soooo easy!
No comments posted.
Loading...
Subscribe
RSS
Recent Posts
January 15-22, 2023 January 9-14, 2023 2023 - Already Merry Christmas November Already Fall Projects July, August, September I Am Still Here! July 19-31, 2022 Week of July 10, 2022
Archive
January February March April May June July August September October November December
© MTWaggin Photos & Blog
Powered by ZENFOLIO User Agreement
Cancel
Continue