I hope you all had a lovely Christmas and I will say ours was quiet as it always is.   Generally speaking I think I'm more excited about the days getting longer and having an extra day off than I was about Christmas.   Alas once it was here I actually started feeling a bit more like I wanted to participate.  Sad but true.

The week was uneventful (after the sick dogs incident of the week prior that was fine) and although the weather started out horrid (the wind was awful) I picked up the walking pace and got out every day after Monday.   The 3 mile loop down in  the subdivision below me was accomplished every day.    My walking buddies were up for it and both tried out their new booties....at least for part of the walk.   Both were less than impressed and I definitely got the feeling that given the choice between shoes and staying home they would pick the latter. 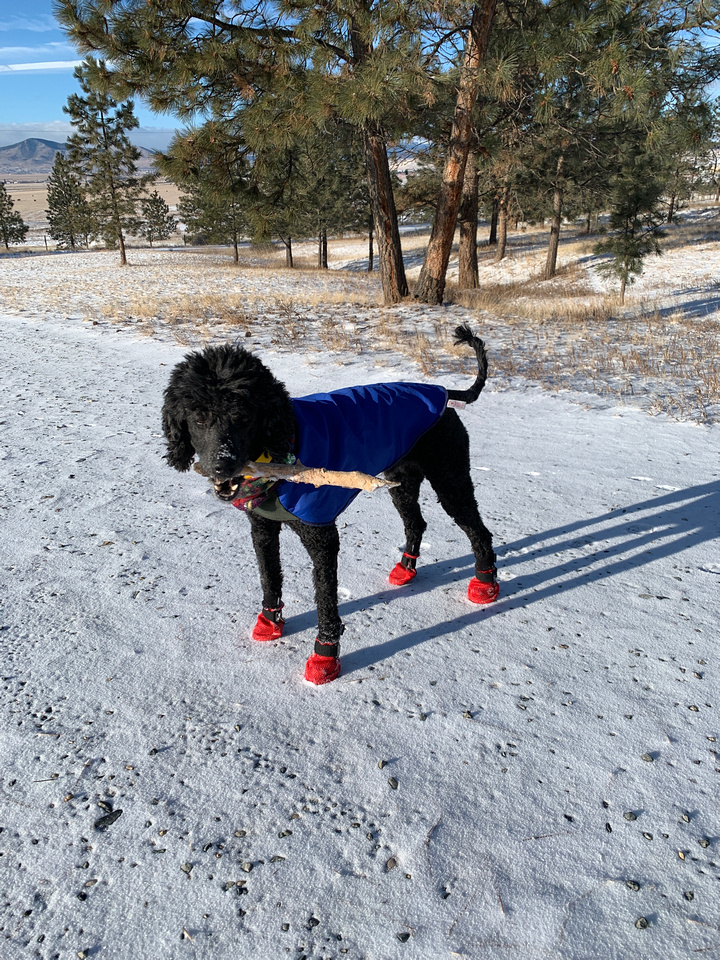 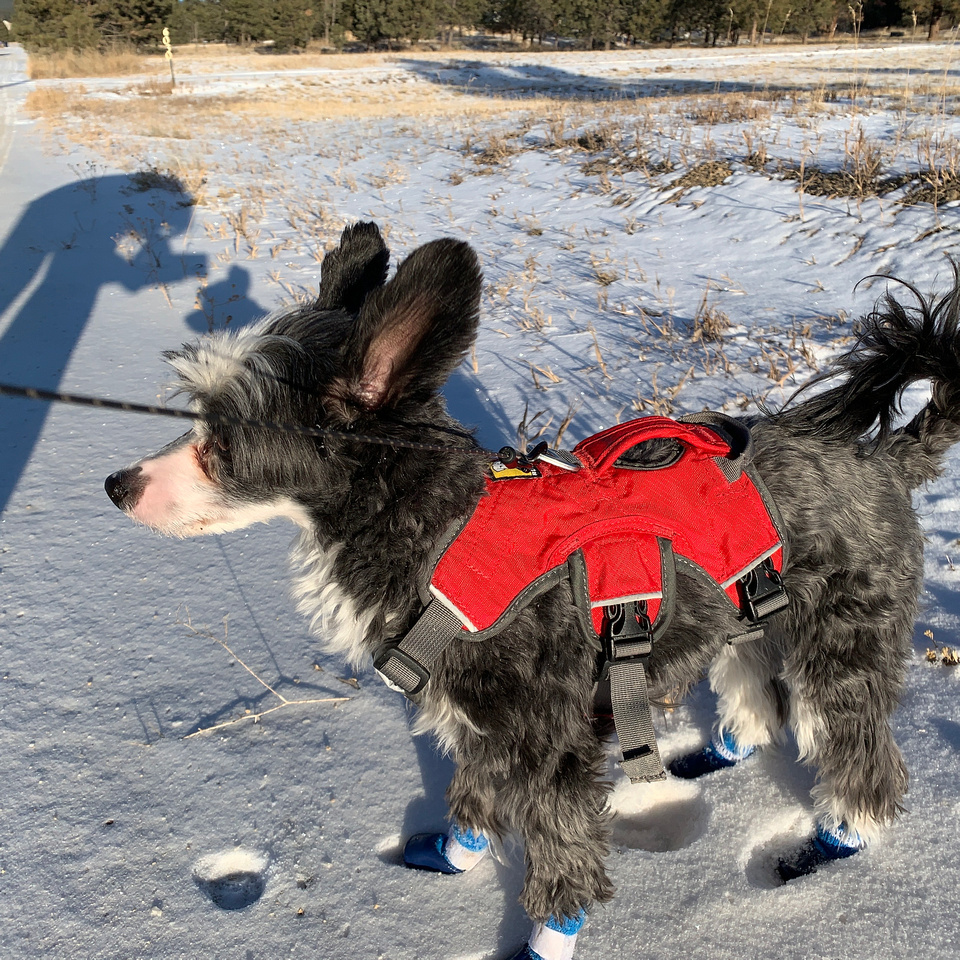 Josie's required additional velcro reinforcement to stay on and although she was a trooper about it she was quite crazy about how slippery they were on the snow.   Once down the hill farther it was melted enough we could take them off.   I need to work a bit more on  keeping them on and I think I'll rough up the silicone on the bottoms a bit with some  sandpaper.    I really like Epic's but he too thought they were a bit too much (and honestly until it gets really cold he doesn't need them).    They definitely will last longer than  the fleece but they DEFINITELY don't like them as well.

We had some darned cold frosty mornings though and at least one where I realized I needed to dig out the mittens to replace mu gloves.   Mind you  once I get walking by the time I'm headed home I'm usually sweating.   I saw this pine cone spike in the road and was fascinated that with all the traffic we have that it was still standing like that in the frozen mud. 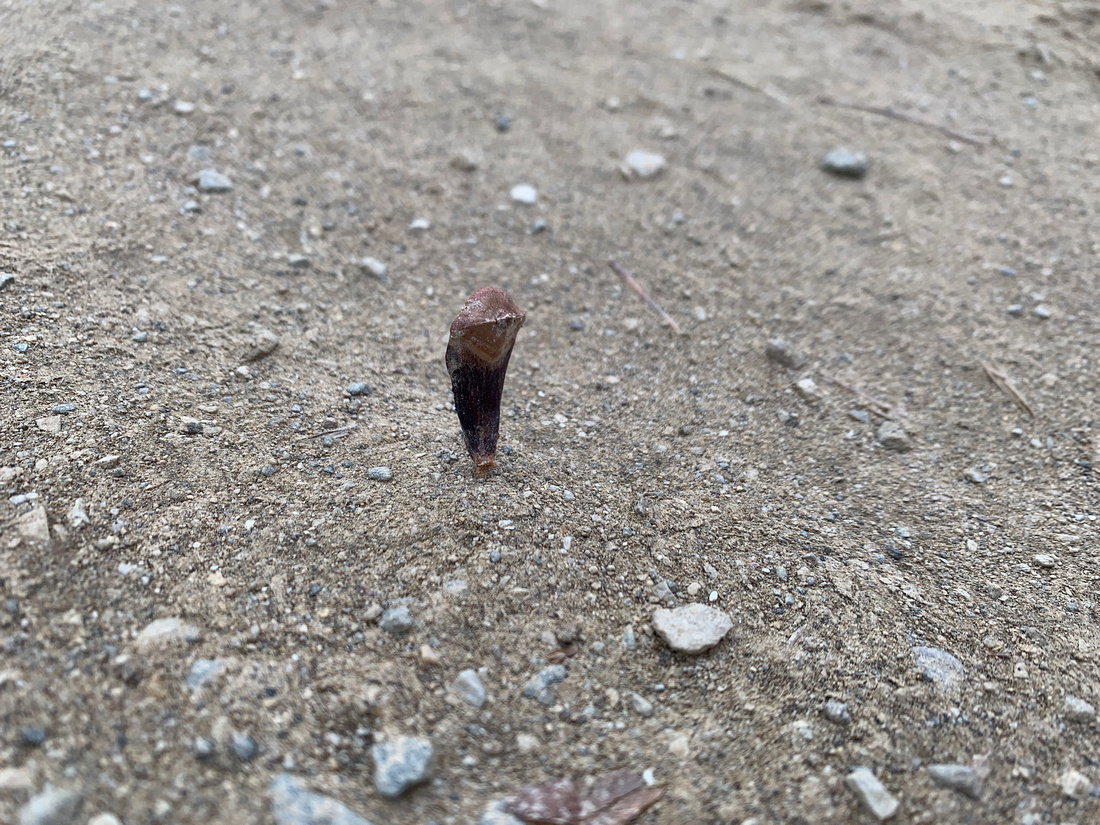 Two puzzles were completed over the course of the week but I have found that they are SO addicting that I do tend to spend too much time on them.  I REALLY loved the finish and the pieces (not typical interlocking) in the Cobble Hill one and the second one I didn't get a picture of (sorry) but went really fast with fewer and bigger pieces. 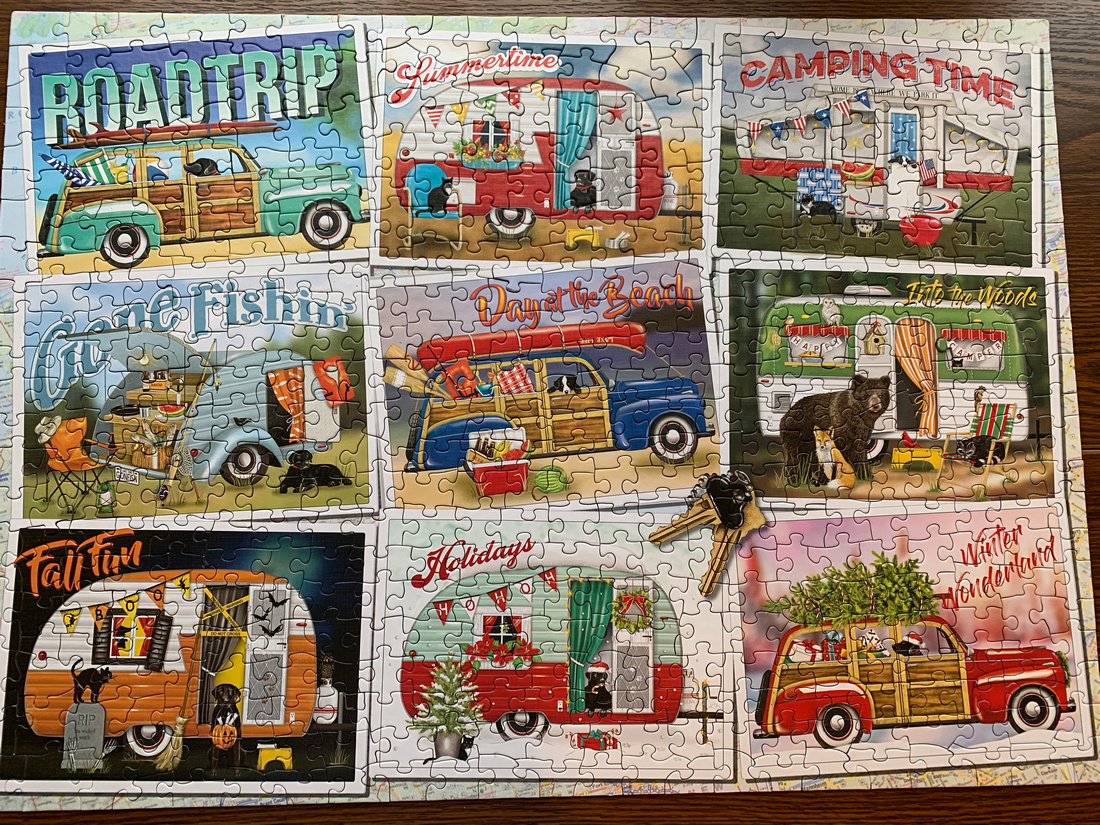 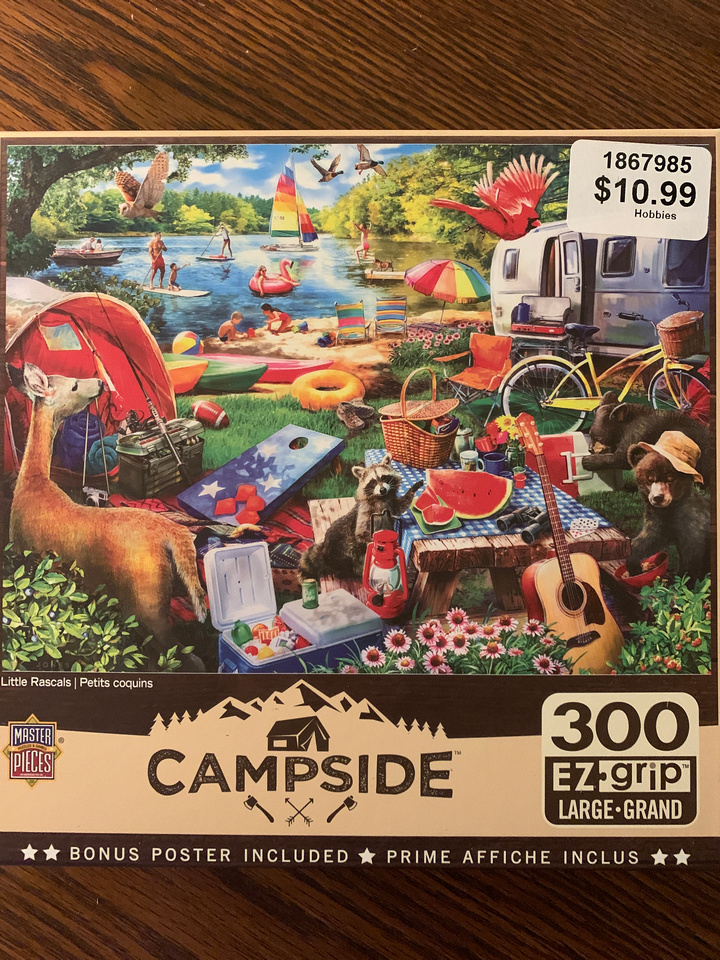 Can you tell I'm dreaming of camping season?

Christmas Day I was out watching YouTube Christmas videos (old classic cartoons, History channel videos on Christmas thru the decades and crafts).   Far Side (you can find her blog on my Other's Blogs link above) had shown a super cute fabric star she had gotten and I was like "I can make that" so off to YouTube  university I went.   Oh yes, another rabbit hole.   I did find a number of tutorials and made some up out of old dog collar strips I had precut (but am not making anymore).   Super fun and as with most, once you get the hang of it, it goes really fast.   I also found a number of other "no sew" type ornaments to do that I've not previously tried so off to yes, wait for it, Hobby Lobby on Boxing Day to get supplies.   Sadly the Christmas fabric was already gone - literally so I'll be using my creative juju and using non red and green for what I make.   Hey!  At least this way I'll be ahead of the game for next year. 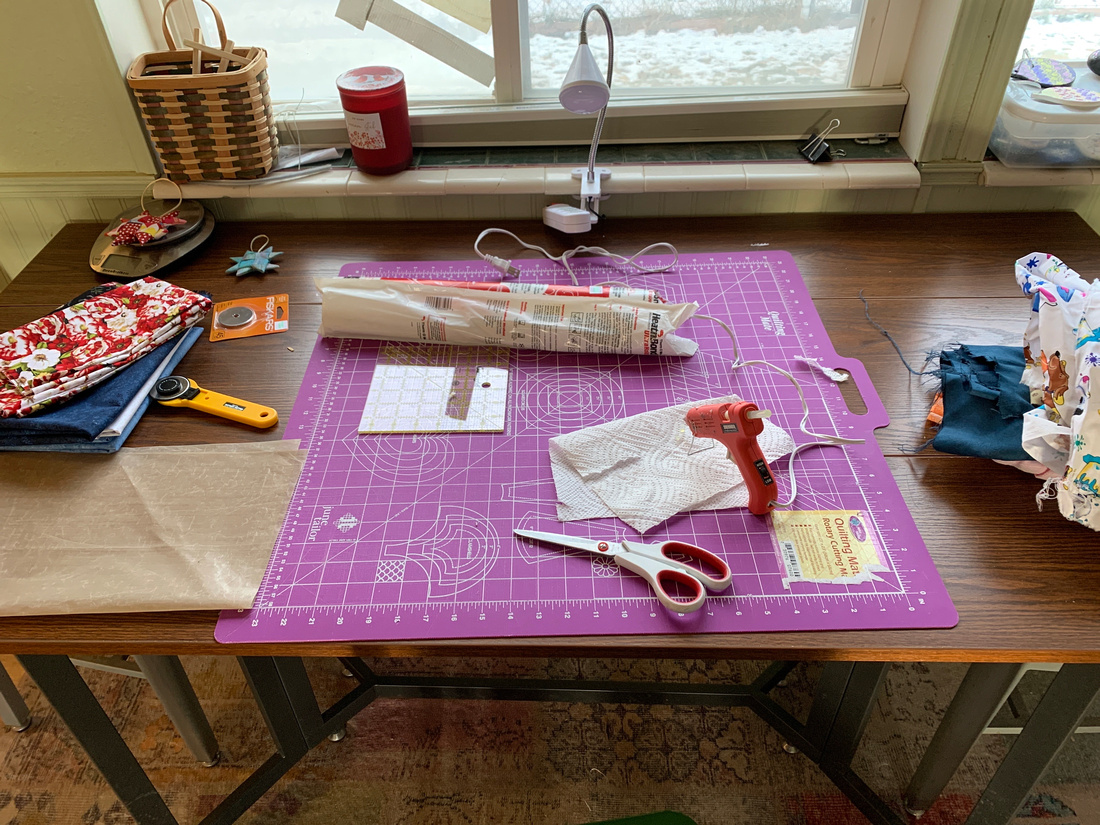 Saturday after errands I got up the courage to try going straight up the hill behind my house for my walk.   It is super steep and many years ago (before the subdivision arrived) that was pretty much the way we walked.   It is my goal to be able to do that hill and the 3.5 mile loop without having to stop but maybe once.   Needless to say I had to stop and catch my breath probably 6+ times and it was slow going for this first go.  The 2 mile loop took about as long as the  same time as the 3 miler down below.    I have decided though that I much prefer that walk, up in the trees, without the traffic and all the freaking fence running barking dogs, to walking the subdivision.   Less noise, more calm, much prettier.  That's  incentive enough for me.   Even short legs (Josie) enjoyed it (less stressful for my walking partners too without all the insane dogs down below). As we rounded the loop we began to see TONS of turkey tracks.   I know we have wild turkeys around as they are sometimes  down as far as my house.   In addition to the usual deer, snowshoe hare and mousey tracks it was kinda cool to see these.  I thought we might see them about but no suck luck. 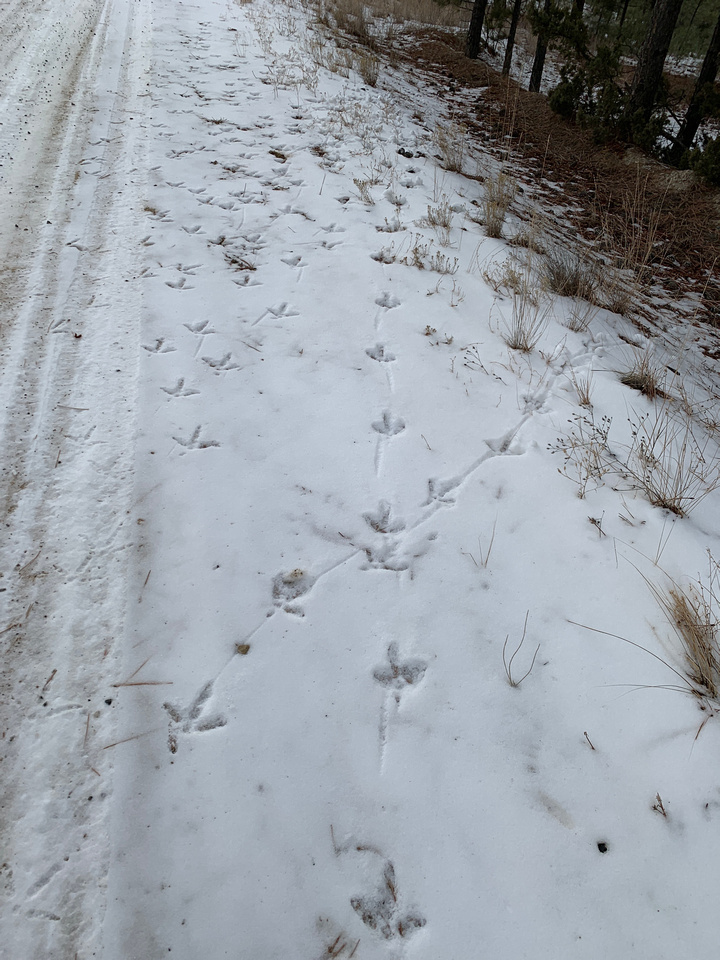 Well that pretty much does it for our week.  Looking forward to a lovely QUIET work week ahead (and only 4 days) and it looks like fairly mild weather too.   Going to do some more crafty stuff while I'm in the mood as well.   Oh and the dogs are all healthy again.  Got them all back on their raw food and things cleared right up.   I am always amazed when I can get them  back on all raw....honestly it costs 1.5 times more BUT I forget that the poop production is 90% less and doesn't smell and they generally seem to feel better.    Am hoping for the same transition when I get on my new nutrition program in January.

Here's to better health and well, just generally a better year for everyone in 2021!

Far Side(non-registered)
I have not much desire to work with fabric but that star is just folded and pressed I guess. If you lived next door I would bring you some Christmas Fabric! One of the bloggers called it a Norweigan Star.
I would pick the no barking dogs path too. I used to put a cream on Chances pads in the winter so they wouldn't get cracked and dry.
I know of another blogger that feeds raw and she picks up stuff from several butchers...chicken legs and even fish. She freezes it. So you would have to have freezer space...well you know you could always hunt or find a Hwy Patrol that has access to road kill and you could butcher. Well enough of my bright ideas!
I hear that a winter advisory is set for tomorrow and part of Wednesday.
Looks like you may have a few Turkeys:)
Sue(non-registered)
Puzzles ARE addicting! I wish I had a place to do one here in Beluga. Well, I have used Lewis' grooming table for a puzzle, but got complaints from him....something about cutting down on the floor space available for daily "ball" games. Sigh.