All phone fotos again for you - we've been a little busy the past 2 weeks to say the least.    I am happy to report I still am at my record low level for using the snow shovel - although it did snow (and thunder and lightening) sideways one night leading to the most interesting snow on the fence posts - all one sided - right  before it melted. 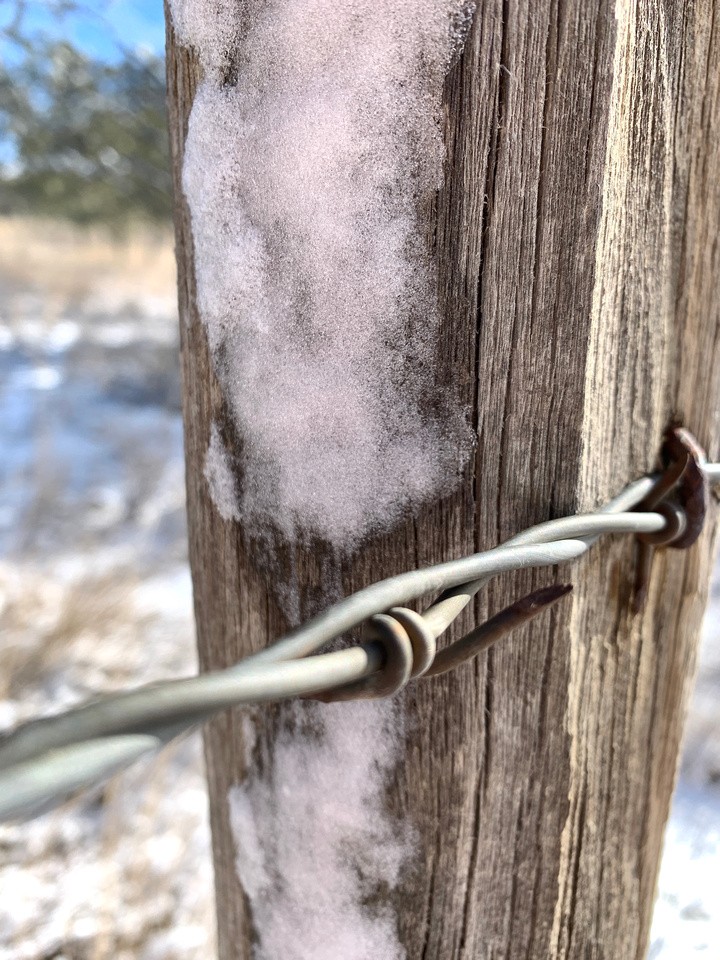 There's been a lot of THIS while we had the short cold spell.  Where's Oliver?  and Teddy? Then it turned really nice outside!   So we did a lot of this after work hours.   I'm even tempting fate and sort of uncovering the porch swing, although it doesn't quite yet get enough sun so sitting in my little beach chair happened way more.   The dogs LOVED it.  I was even able to let them out before I got off work so they got "extras"!  LOL 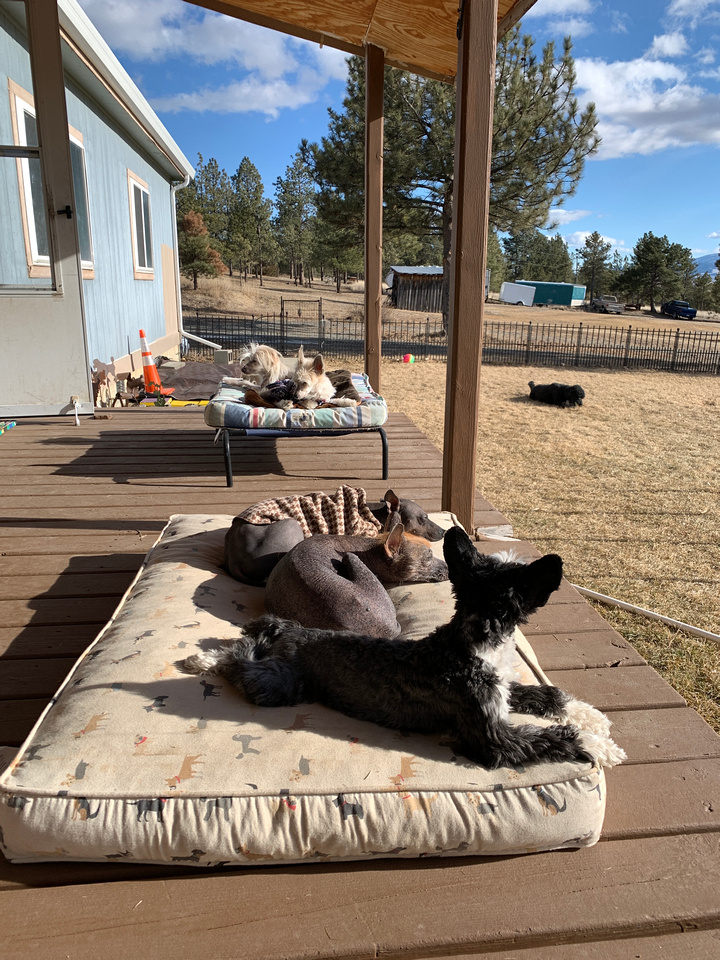 Teddy will be 15 next Tuesday and is really doing pretty well.  Of course I knock on wood when saying that.   I'm sure those old creaky bones really love the vitamin D! 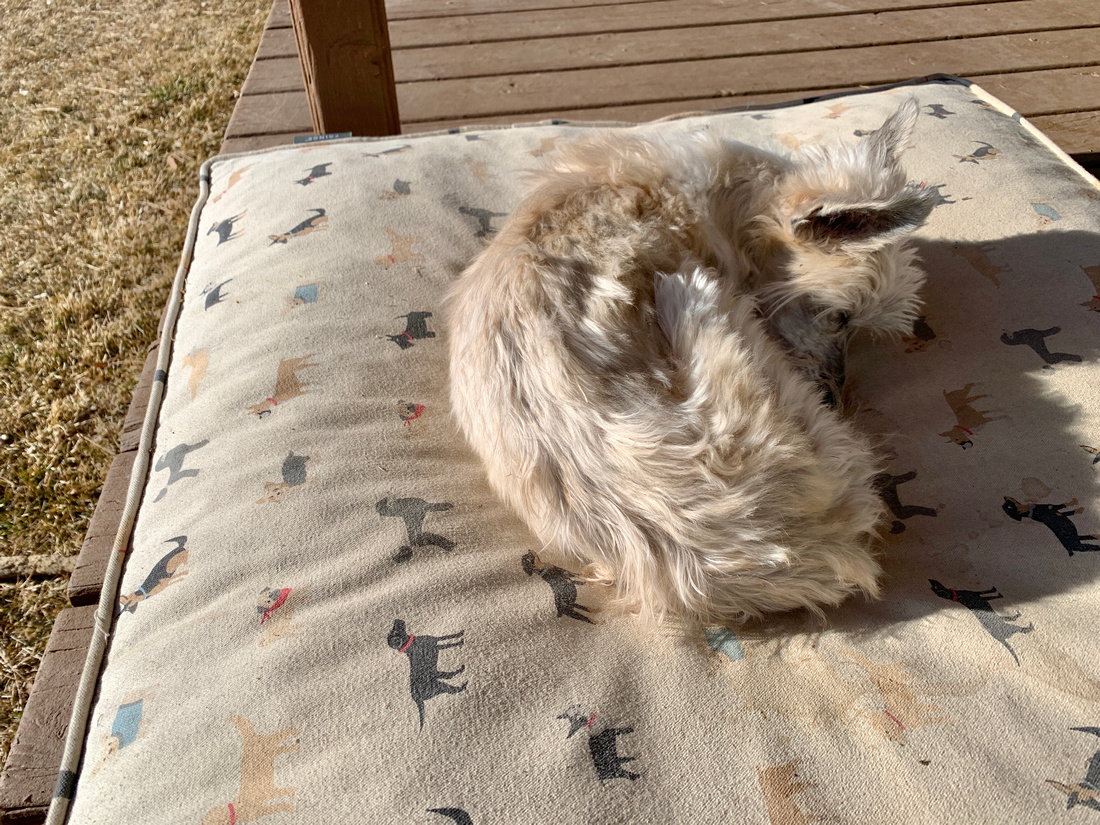 Apparently when I went to town on Saturday without any dogs (doesn't happen often) the "good poodle" had to fend off robbers with knives!   (don't judge the floor)   He led me to believe they wanted the all of our riches and he couldn't let that happen! 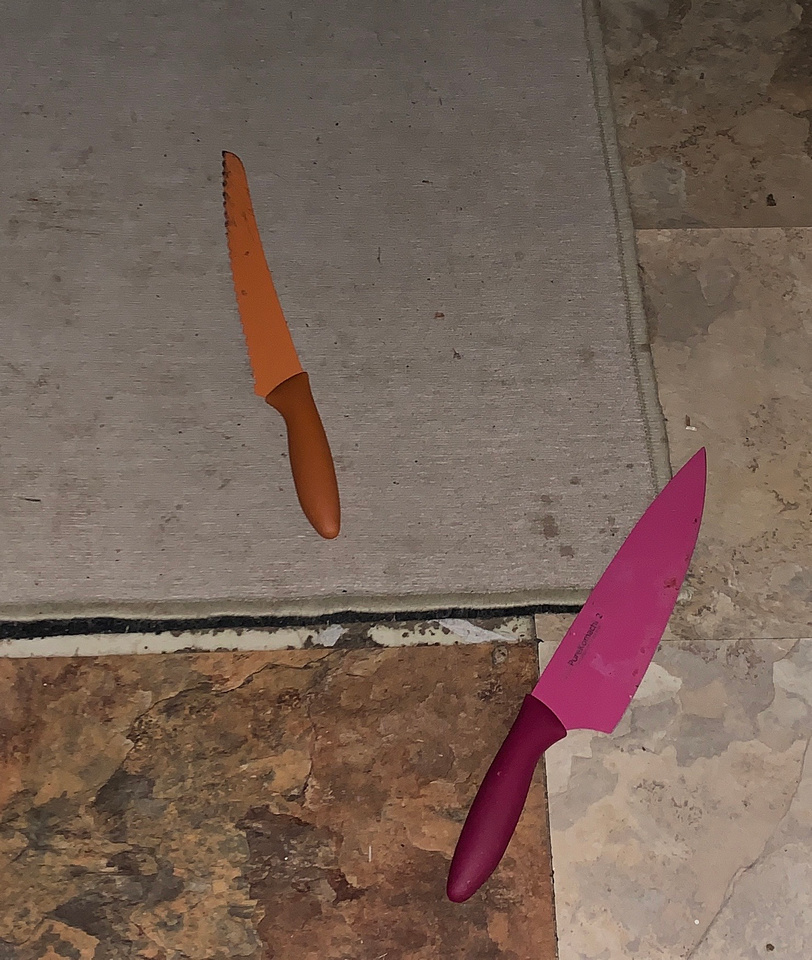 Now take a look at this sunset.  On my way home from town one evening.  This is from the parking lot where the poodles and I walk a lot.   I have NEVER before noticed the skull (gotta pay more attention). 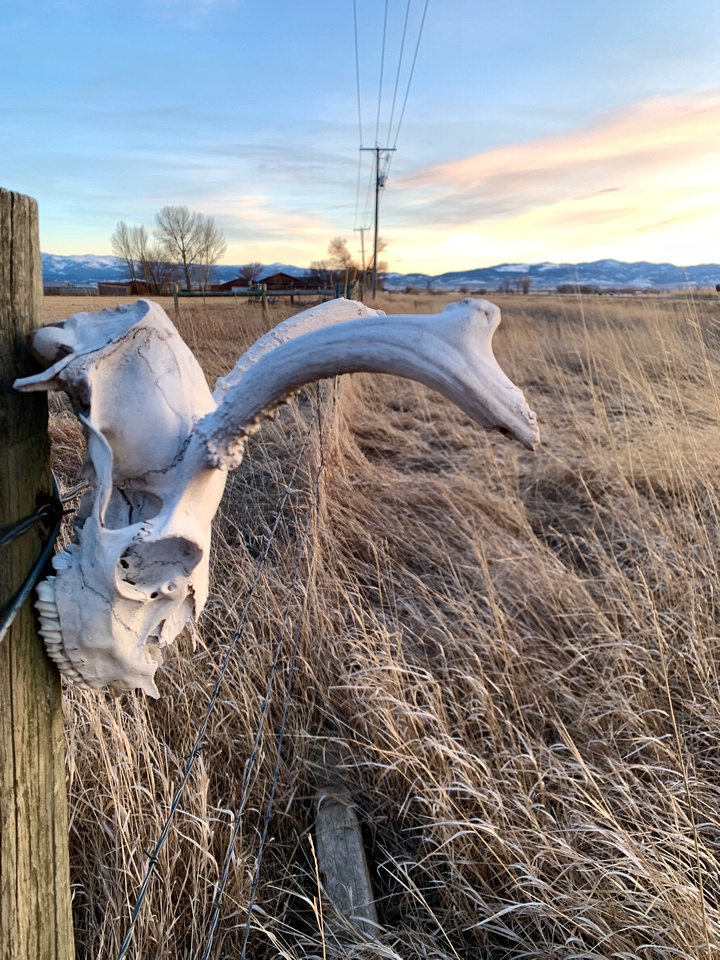 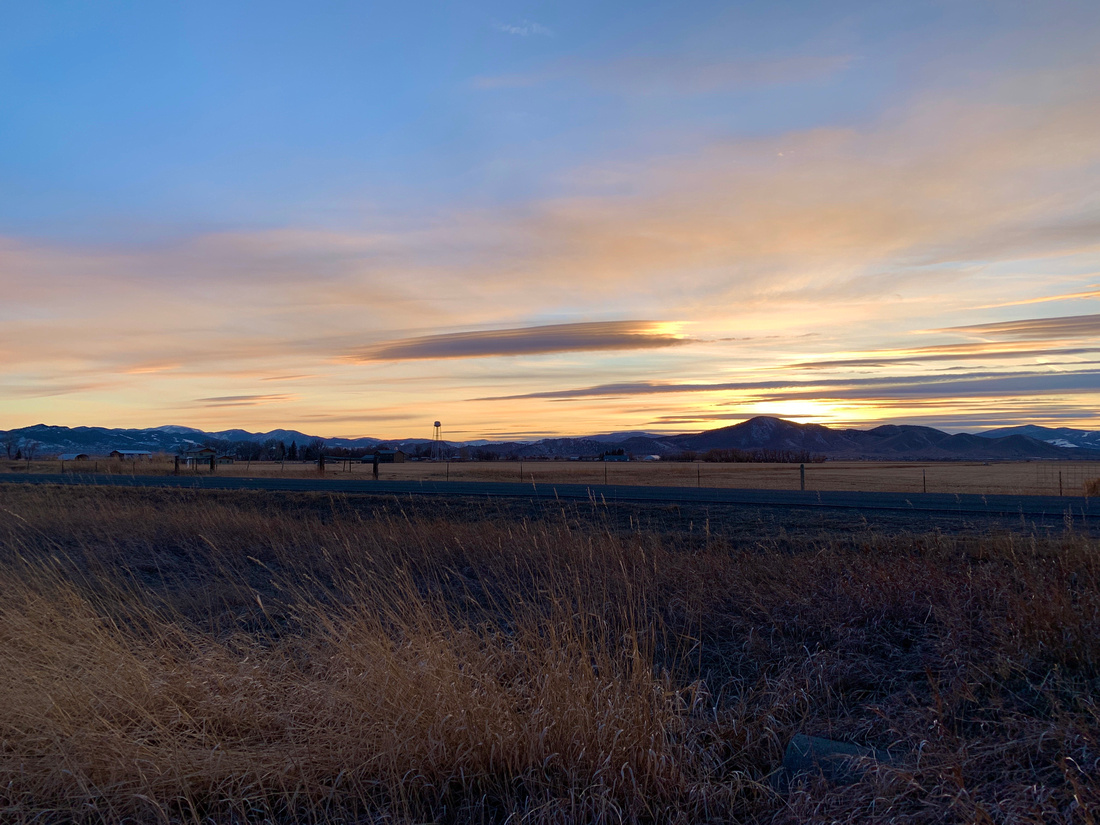 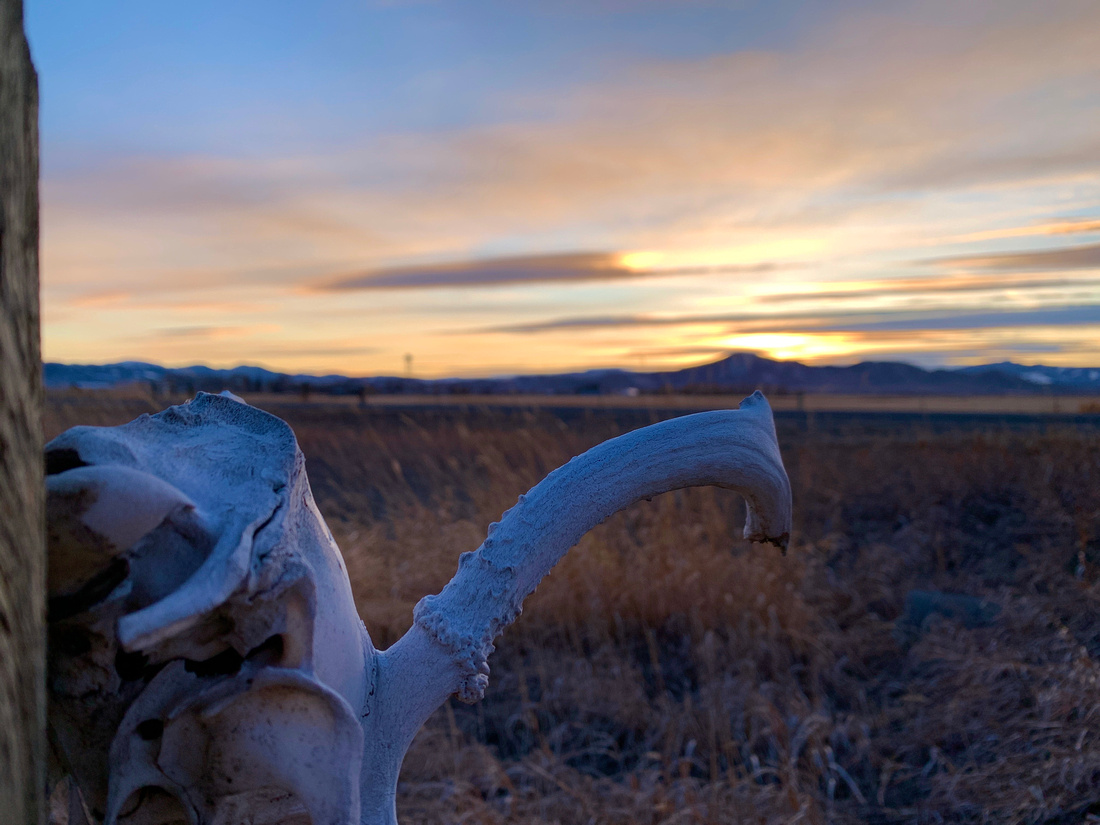 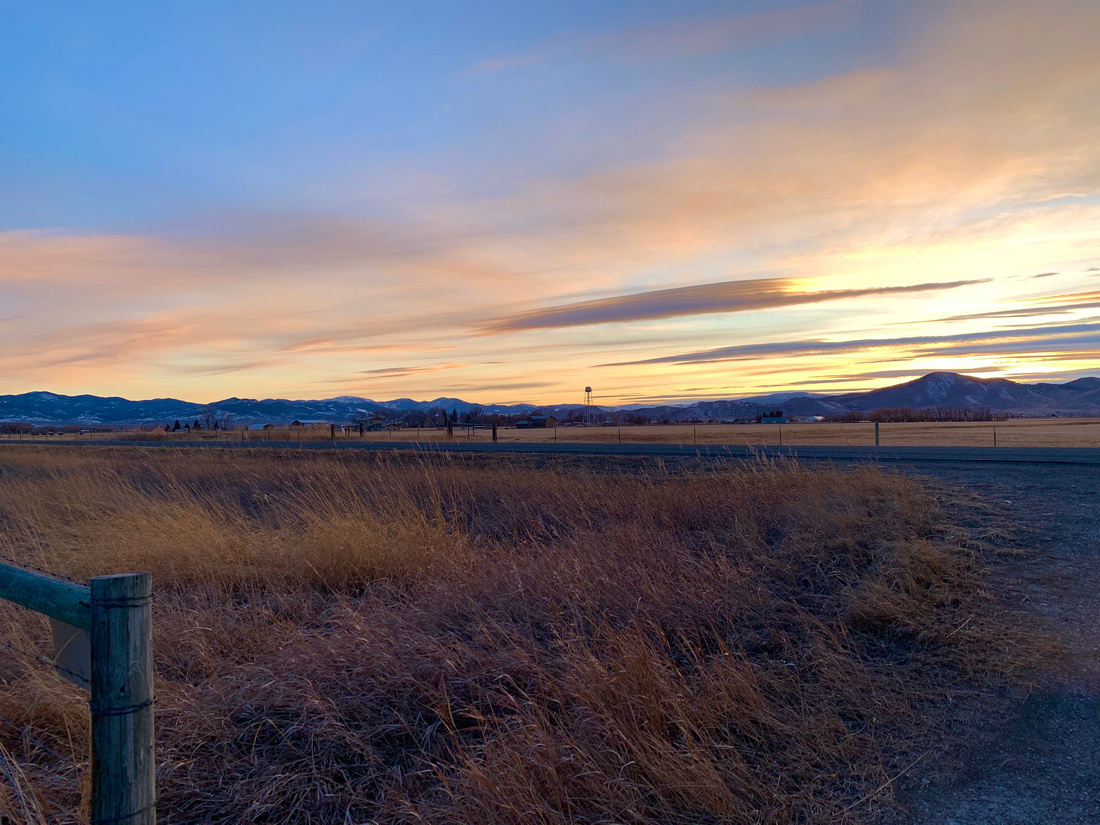 Taco Tuesday was a calling though this week after the chiropractor!    YUMMMO!    And yes, I tortured my Mom and brother by sending them a text with it!   They don't have Taco Johns and both love it.    Yeah, I'm evil. 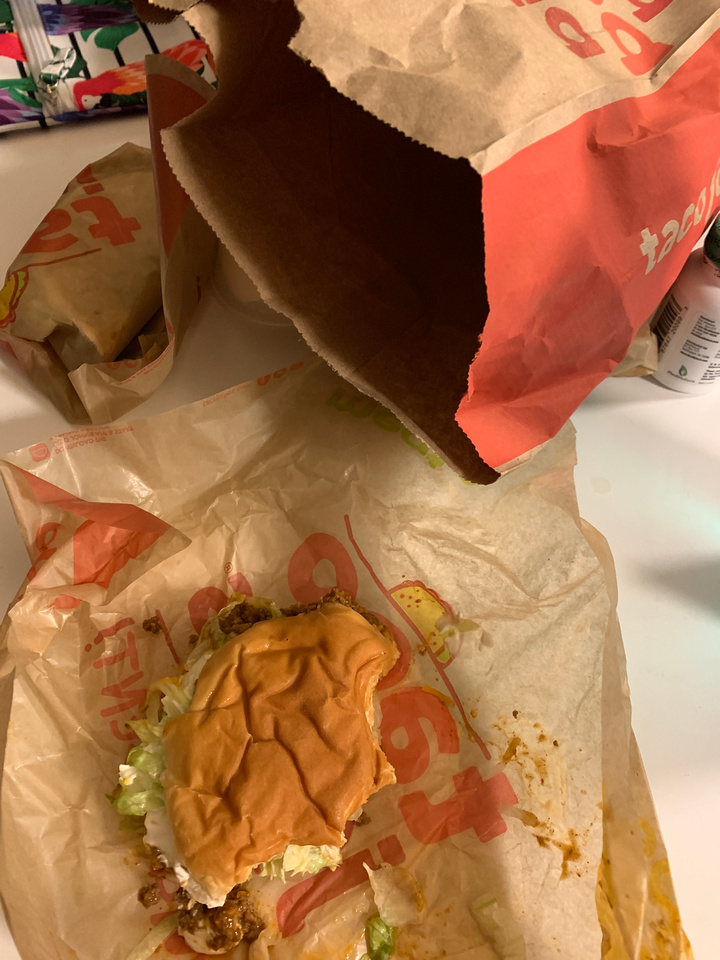 This week has been full on hurricane winds - for THREE DAYS!    I was just getting in the habit of walking at lunch every day but I'm not fighting THAT!   Today, Thursday they finally let up...some.   So I decided to give Oliver a go in his new harness AND hook him to Josie.   Thank God Epic can walk off leash because walking these two was worse than herding cats!    I have discovered though that truly, Oliver isn't that interested in "walkies" - he loves playing agility and in a controlled area but he just isn't an explorer.   Josie on the other hand is all about THAT!   So as Teddy was my hiker and boater (jury still out on the latter with Josie) I think Josie will be the one to go with Epic and I.   Sterling of course also isn't into the walkies.   That's fine and good to know.  Since hooking Oliver to Josie didn't improve it, best that he'll just generally stay home. 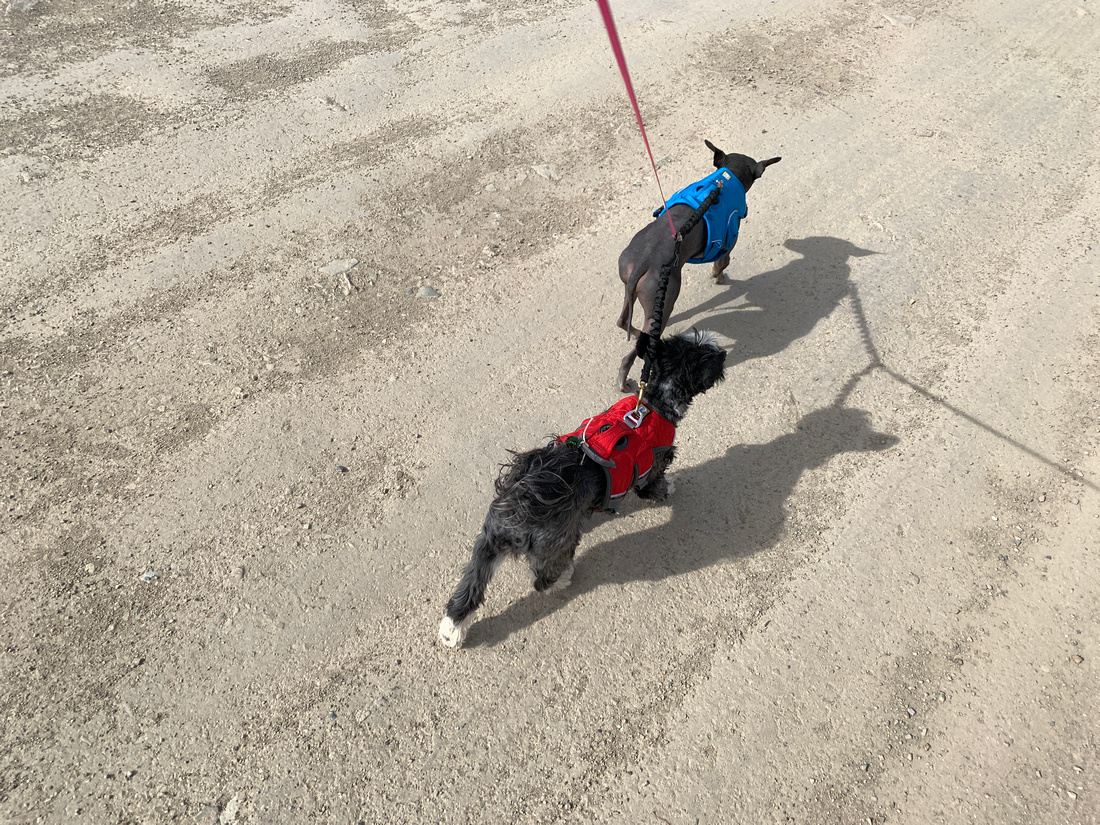 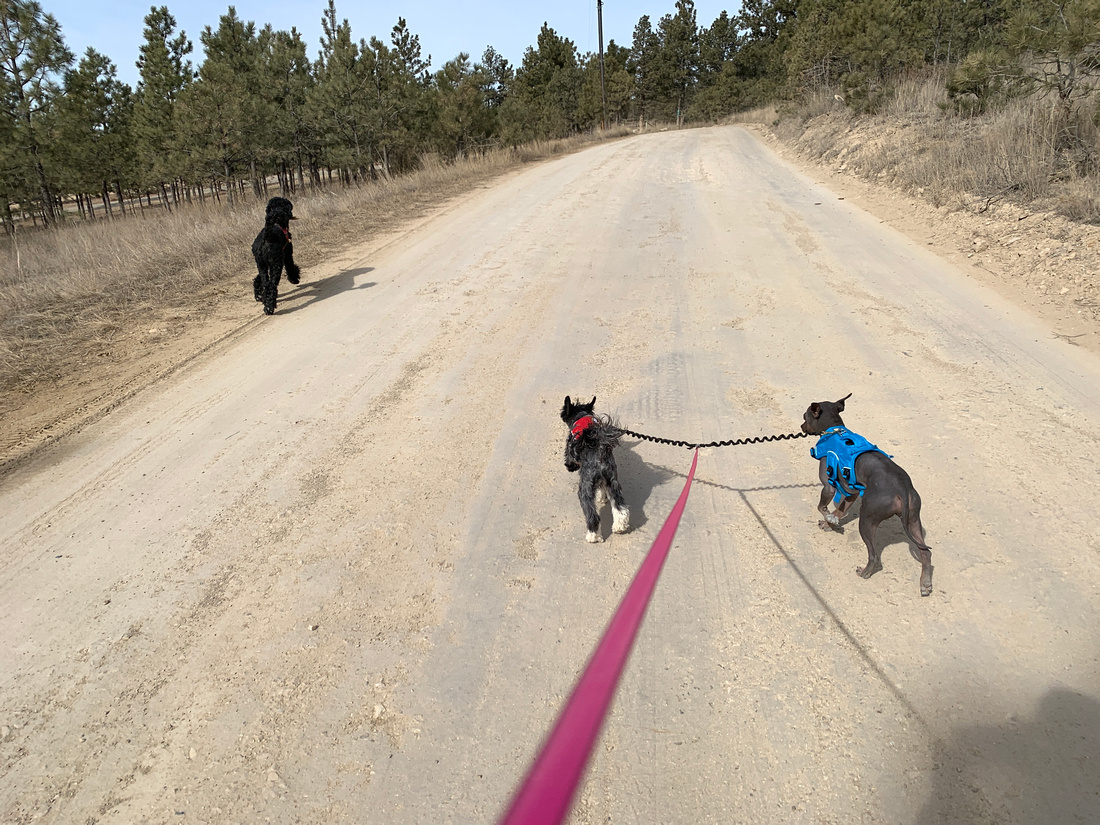 Wish I had anything exciting to report but honestly I really don't.   We are just rolling along here, looking forward to a long weekend and hoping for nice weather to go for a walk and work in the trailer.  I just about have the curtains back up in there and this afternoon, move out the car and Epic gets a good clipping - he is WAY overdue and then I'll bath him (works better in reverse and I sacrifice the clipper blade because his coat is so dense he doesn't dry).

Far Side(non-registered)
Incredibly windy here Wednesday and Thursday....made for cold days. The pups look good soaking up the sunshine!
Diane(non-registered)
The sunsets with skull are lovely shots. You live in an isolated area. My daughter has just bought a dog. It is a border terrier and very cute. He doesn't like walks either. He hides when he hears the word and lays down on his tummy when they try to walk. Other times he's fien.
No comments posted.
Loading...
Subscribe
RSS
Recent Posts
Bring on Spring Nutrition 6 Weeks In Will March In Like a Lion What a Week of Subzero Looks Like Here Hunkered In Looks Like a Post Every 2 Weeks... Let's Catch Up Happy (I hope) Holidays Counting Down to Christmas Cold Again
Archive
January February March April May June July August September October November December
© MTWaggin Photos & Blog
Powered by ZENFOLIO User Agreement
Cancel
Continue