So sorry I missed posting last Sunday.  I honestly just didn't have much exciting to report or show and I didn't want to be posting just for the sake of posting.   I also had a couple of days where I was busy with friends.   Needless to say we are still here!

As is the case with many I am sure, work this past week was INSANE.   Everyone (and there were a lot) that took off the last 2 weeks of 2020 returned in a frenzy.   Blech.   So it goes.   Things be a changing yet again in my team - I just try to stay out of the fray and get my work done.

I can say I am increasingly happy as the daylight hours also increase.   It is so nice to still see that ball of sun in the sky as late as 5 p.m. these days.   It'll only get better from here (even when we can't see the sun).   I has generally not been sunny here but gray and brown and dry.   That was until this pas few days and as much as there was whining that it snowed - it  seriously was nothing.  We got oh 4" or so here and anything pavement didn't stick.   It was almost a spring type snow though as it was so warm and now we are dealing with fog rolling in and out as the temps ground level up are so weird.   Glad it had moisture in it for sure though as we desperately need it.   Even the mountains are dry.

Probably the best part of the past few weeks was a lovely package from a friend in Hawaii who sent me a gift of macadamia nuts off their  tree.    It was nothing short of  magically yummy!   She had already dried them and vacuum packed them and sent with directions  on how to roast.   I tossed them in some rosemary olive oil I had, salted and roasted per directions.   They were gone in 24 hours!   Nope I will not apologize for snarfing them so fast! 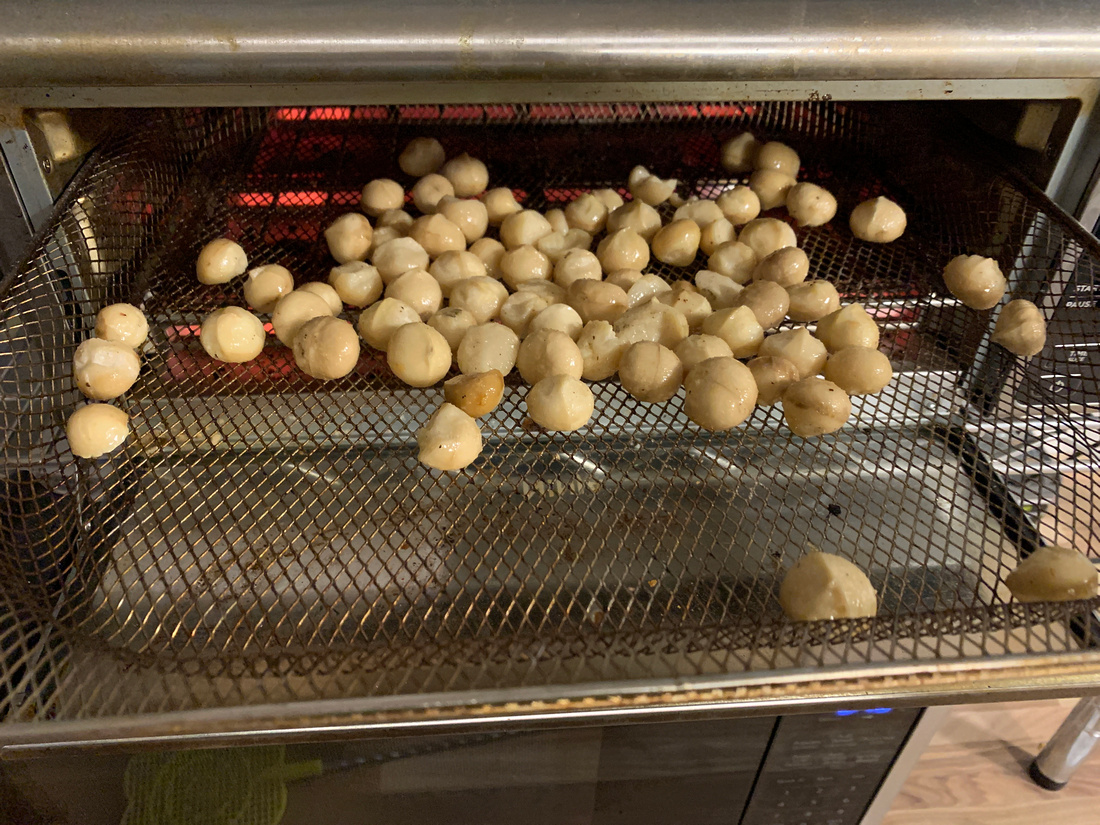 I have a real mix of  photos to share.   Some before the snow, some after, all either here at home or on my walks.  Hopefully it won't bore you too much. 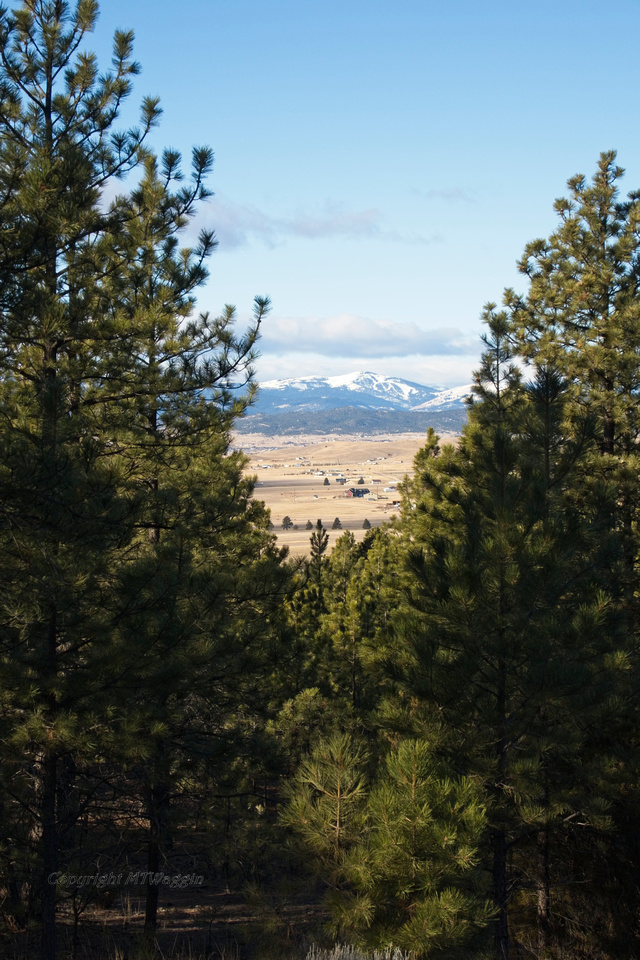 You can see above the ski hill in the distance and how bare everything else is.   Even the ski areas base snow at summit is pretty pitiful so far this year.  They have snow but when you see 36" at the summit of a ski hill it is bad. 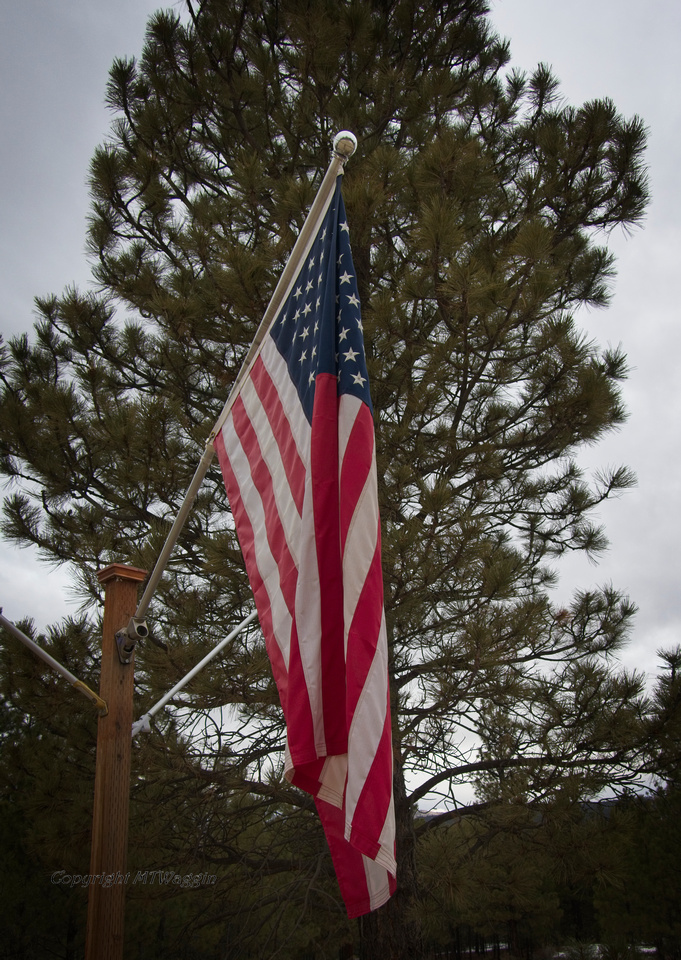 Halfway up the hill one of the neighbors has a 3 flag post at their driveway.   I just liked the folds in the flag and it makes me happy. 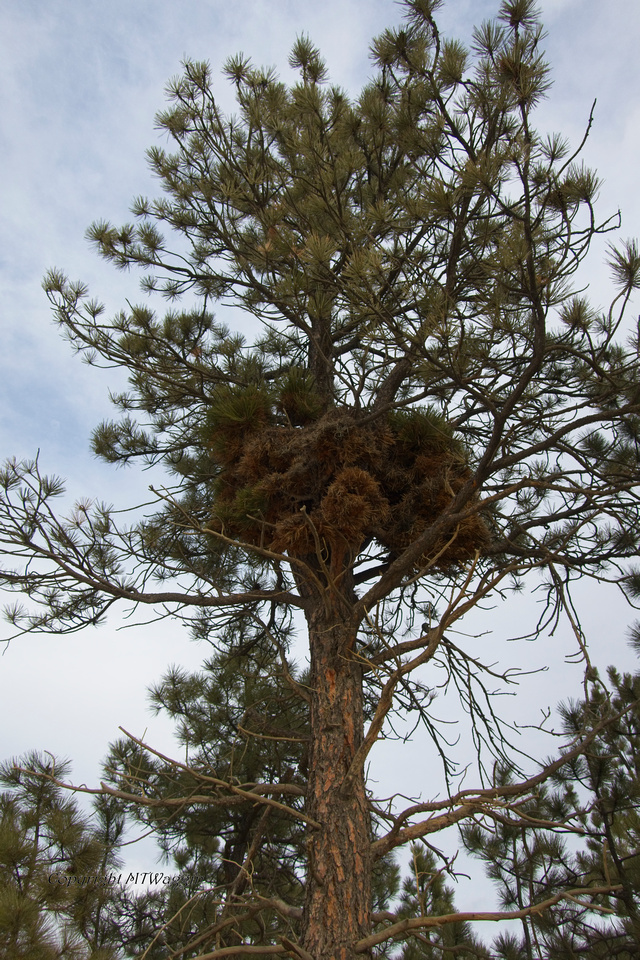 I always wonder what critters  might find homes in these masses in the tops parts of these trees.  You don't see tight bundles like this often and I have no idea what causes it. 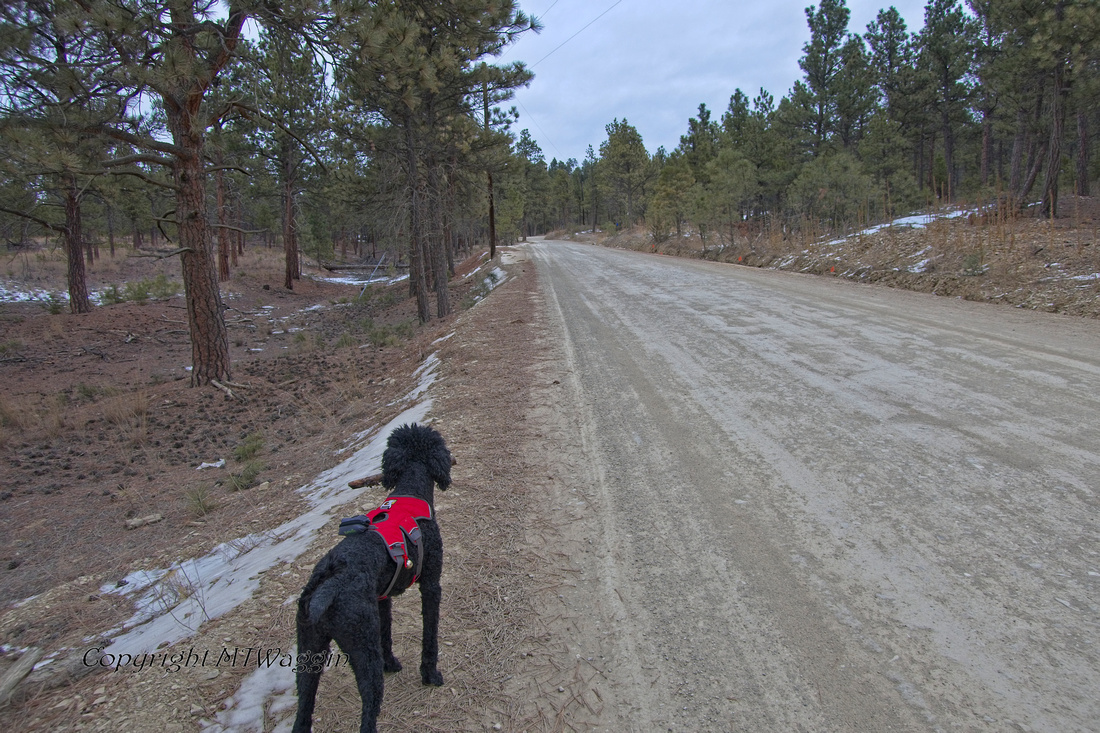 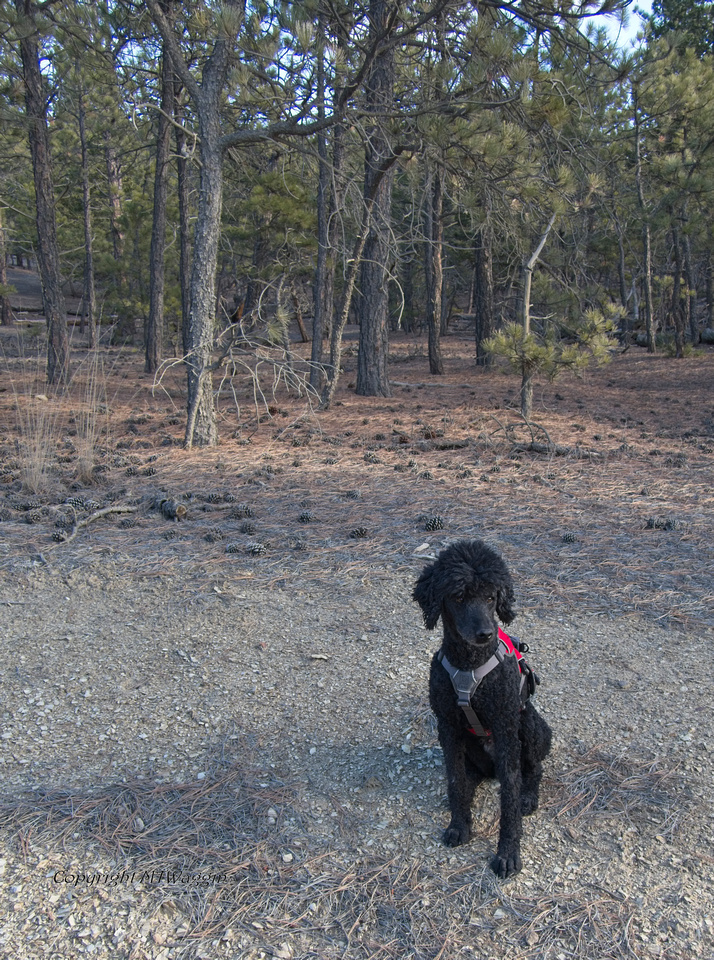 One of my intrepid walking buddies.   He is so different when carrying a stick but I think that day he had and lost about 3 of them in our loop. 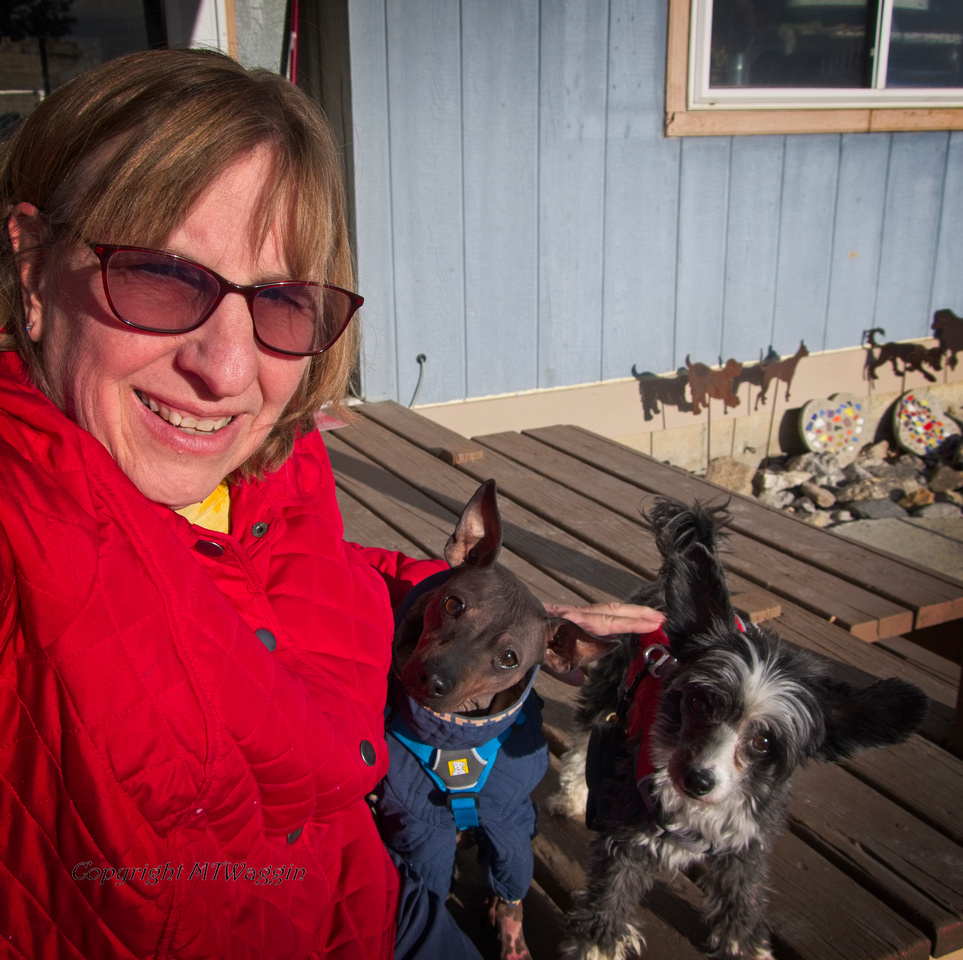 I am REALLY bad at selfies (my arm isn't long enough) and even more so when it isn't with the phone.   Oliver again keeps going "ape crap" every time we leave to walk so I bundled him up and took him again for a 1.25 miler this time with Josie to see if maybe having her along helped his attitude.   Nope, by 1/2 way he was dragging behind and unhappy.   No naked walking buddy for me - check!   He'd rather be doing this: 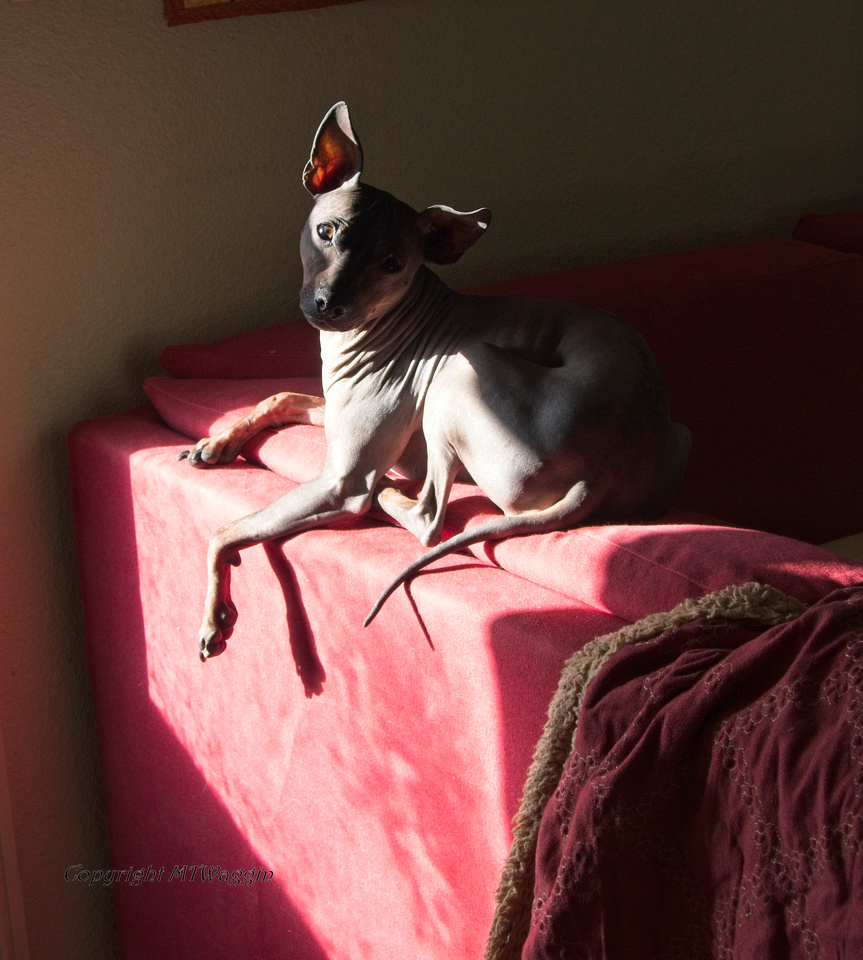 As I mentioned we got snow the past few days.  I did take a "snow day" from walking the day it was snowing actively but got back on the trail the next day. The snow day though did see ONE quick venture out to the front yard for 3 of em - sometimes you just gotta run amuck in the fresh stuff. 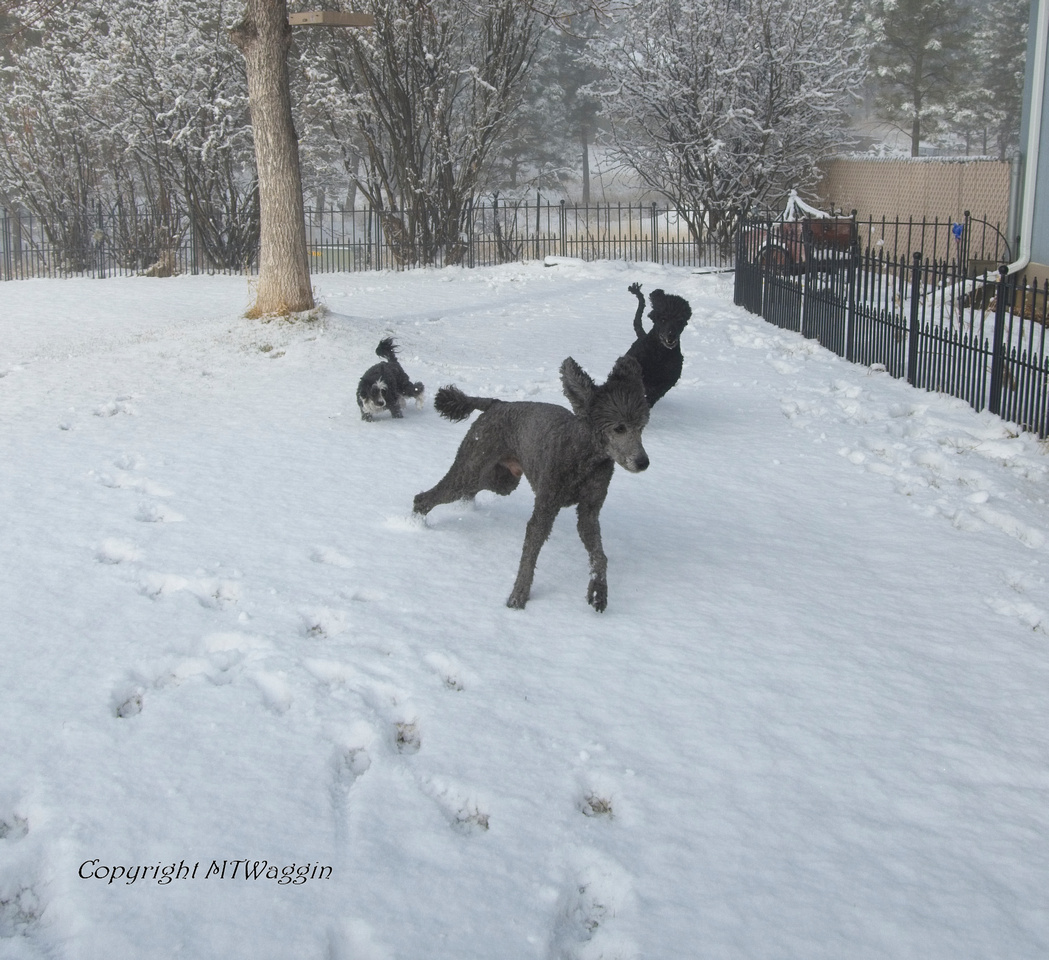 I took both Epic and Josie with me  walking the day after and I'll just say it was like dressing 2 toddlers to go sledding - I think it took me 20 minutes to get them both dressed (much less get ME dressed) to go.   Booties and coats were in order as the snow was very wet and sticky and I didn't want them chilled. 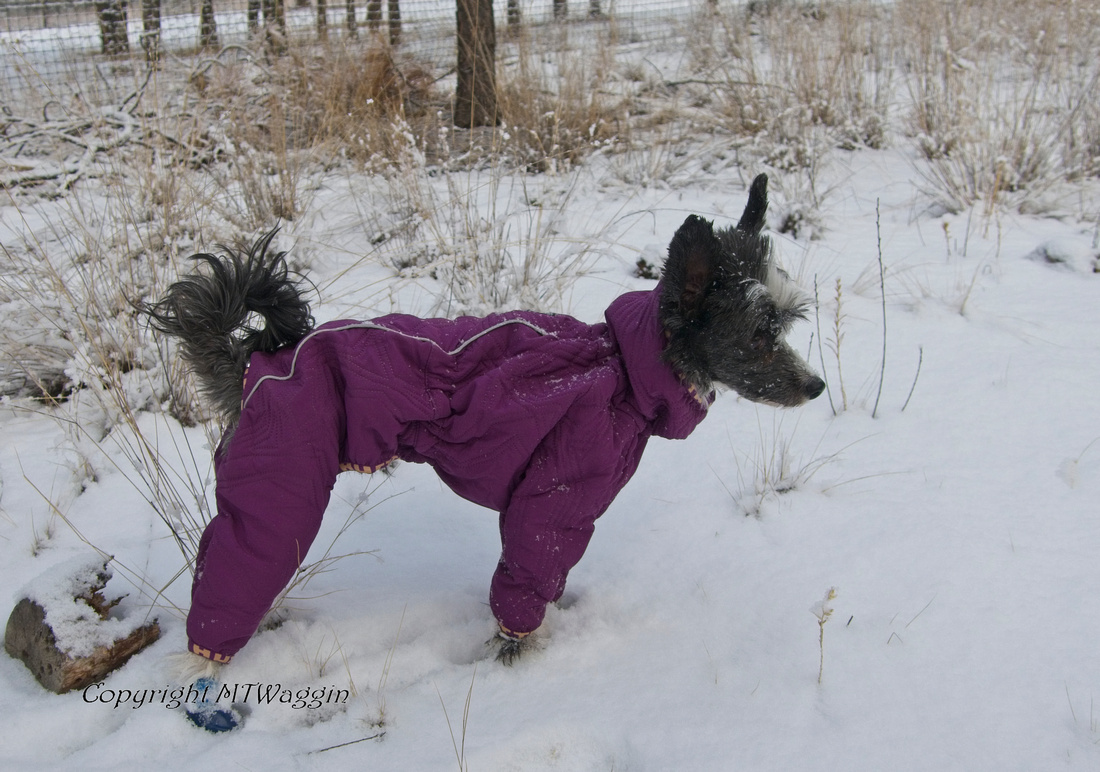 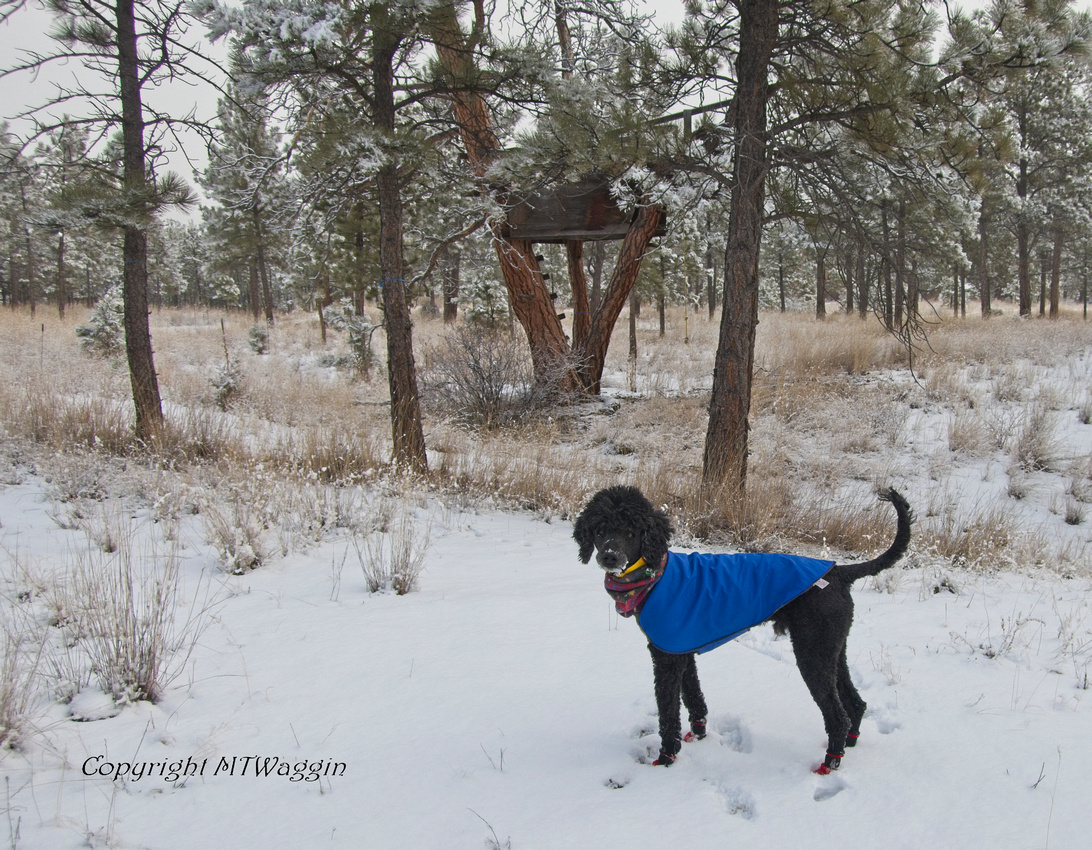 I still need to rough up the bottom of Josie's shoes  though as she went flying out the front door, hit the snow on the sidewalk and promptly skidded nose first into the snowy lawn.   Yes I laughed.  I tried to get both of them to understand that they needed to walk IN the snow not in the road tracks so they had traction.   Not as easy as you would think.  But they were ready to go and happy to  run a bit on our way up the back to the road. 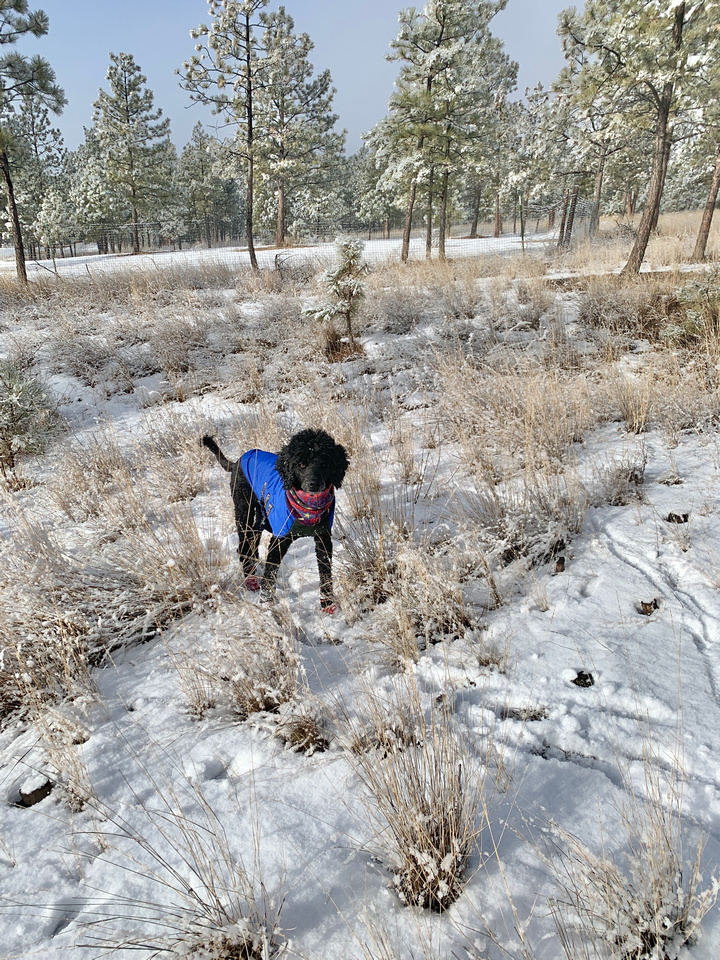 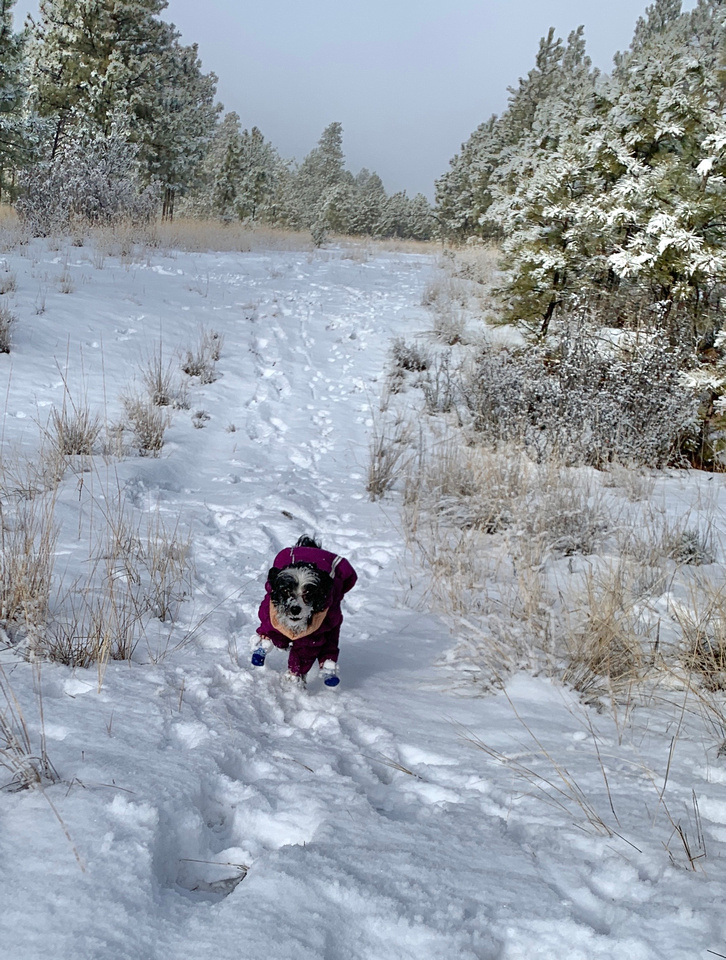 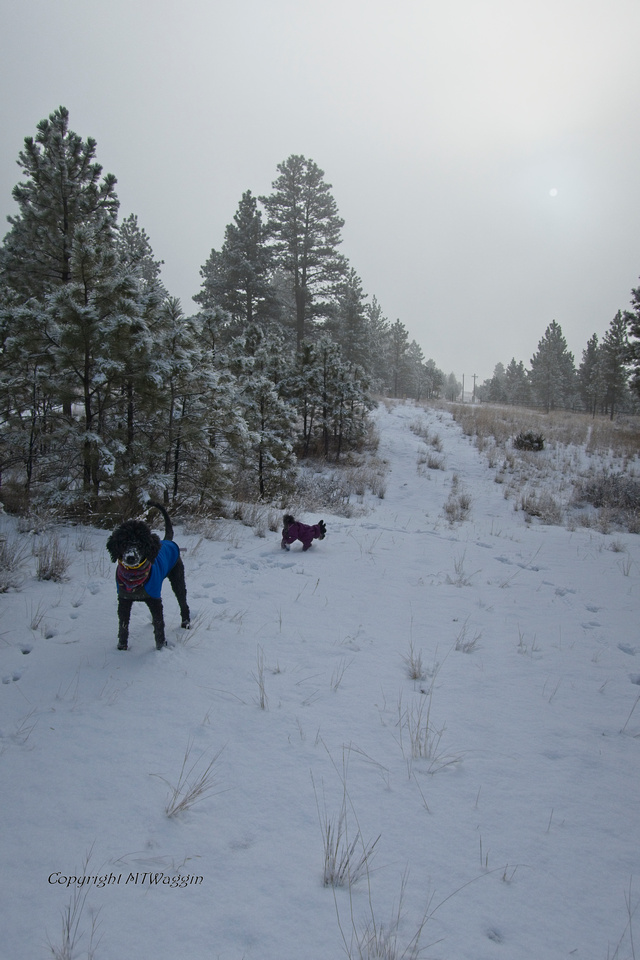 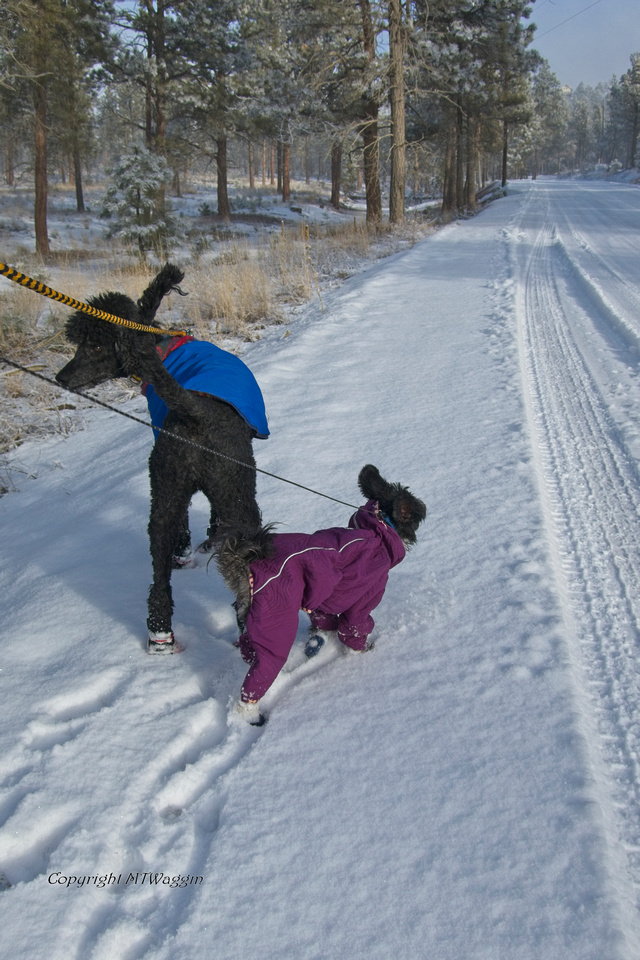 I was trying to be very mindful not only of them slipping around me ME slipping around not  to mention the possible cars going  by and low and behold we just got headed up and this 20something in her beater front wheel drive car thought she'd  go up the hill (lives up there believe it or not) and made it less than 50 feet up the road and stalled out.   I shook my head, stopped and walked the dogs down into the trees and watched what she was doing.  I wasn't going to be on the road for her to slide  backwards into us - let her hit a tree.   Oh  my gawd.   She couldn't for her life figure out  why she was sliding sideways down the road and what to do.  I finally started gesturing to her (as she kept sliding sideways back down  the hill) and she finally rolled down her window and yelled "I can't go there!"   I was like turn your front wheels down the hill, she did, now let off the brake (why she was sliding) and it all straighted out.   We walked on and I don't know HOW but as we crested the top of the hill (3/4 mile farther up than she got stuck) I heard a car and a beep beep on the horn  as she FLEW past us.   I have no freaking idea  how she got that car up that very slick road.

We wandered on, dogs on leash because people wouldn't be able to slow or stop and we managed to get some fun photos (I so love new snow). 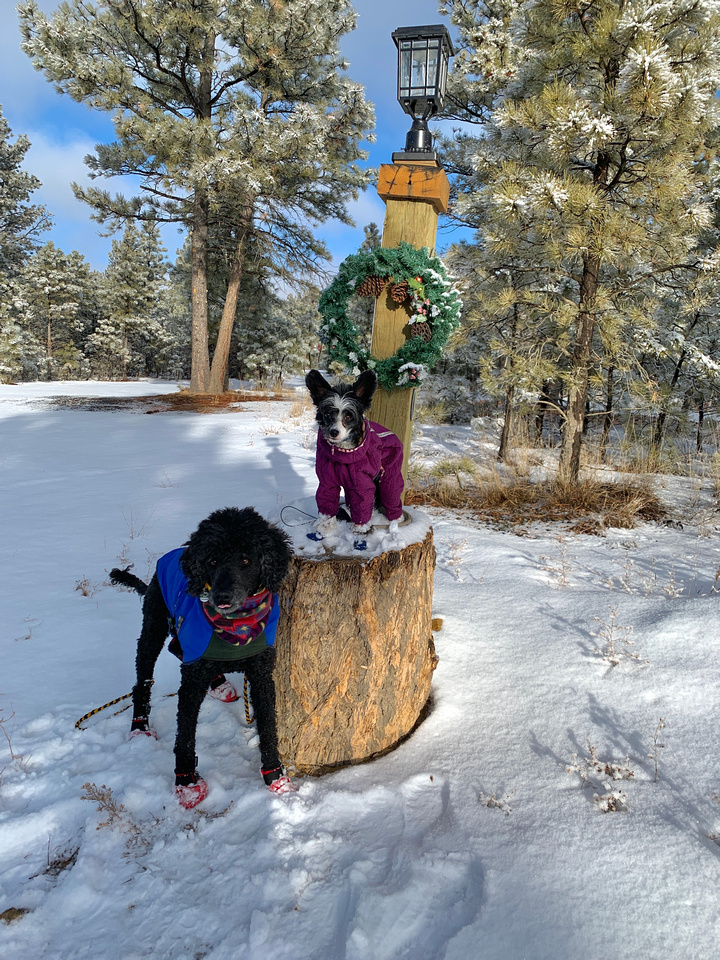 At the top of the hill some neighbors have this light post (and old Christmas wreath) at their driveway.  I couldn't pass it up.  Epic's opinion is obvious if you look!   But then we got on top and I got this shot  with my phone and I have to say it was my favorite of the two of them (and boy were they tired from all the slipping and sliding). 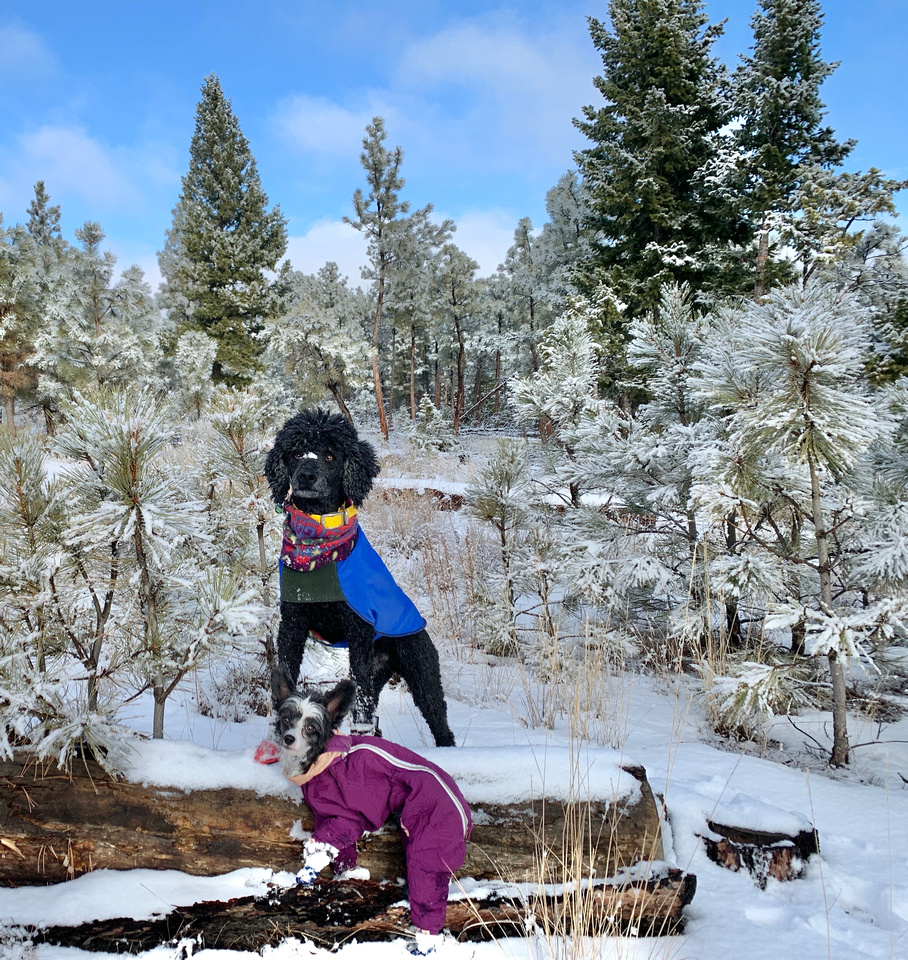 Almost looks like it was in a studio doesn't it? 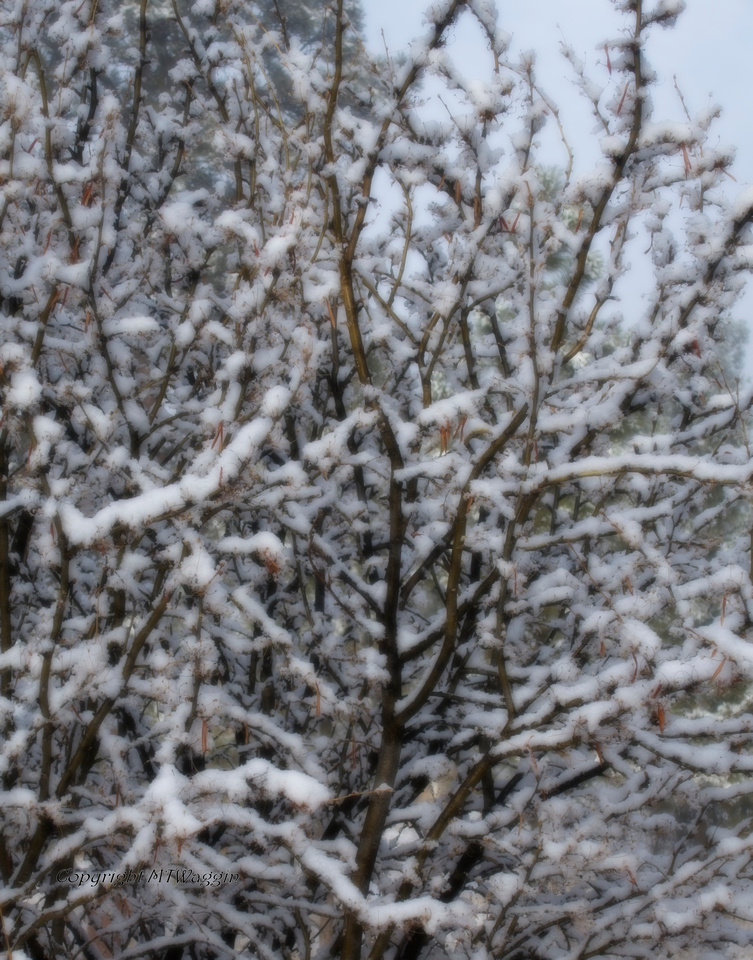 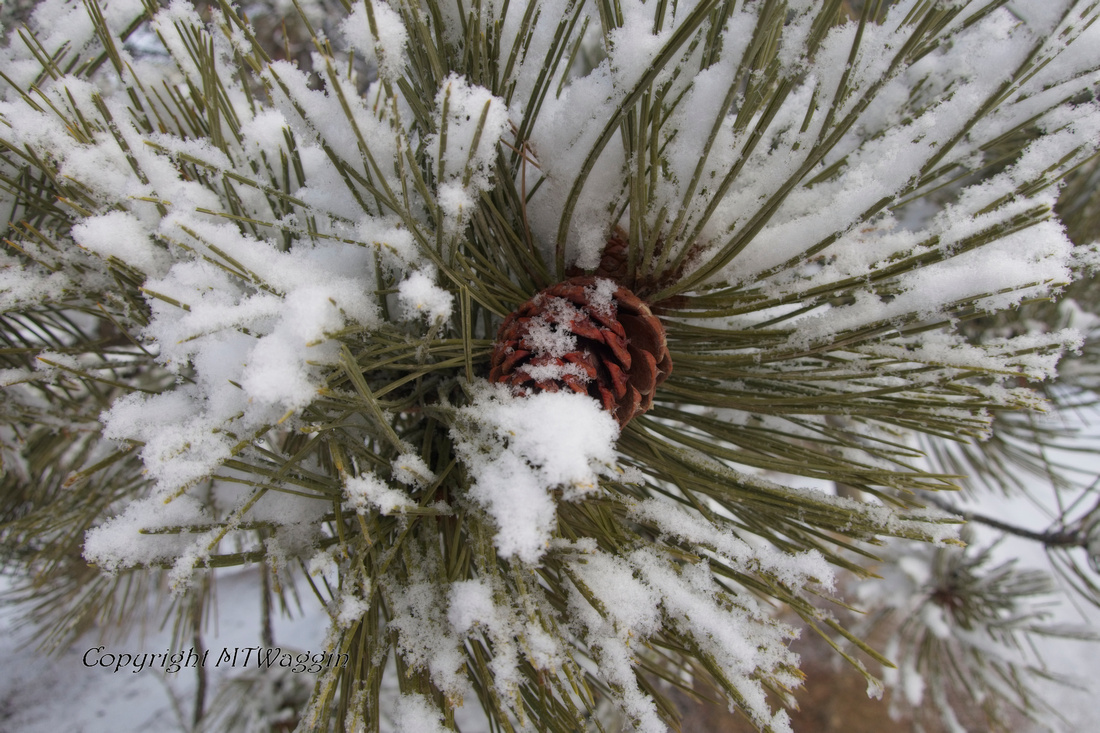 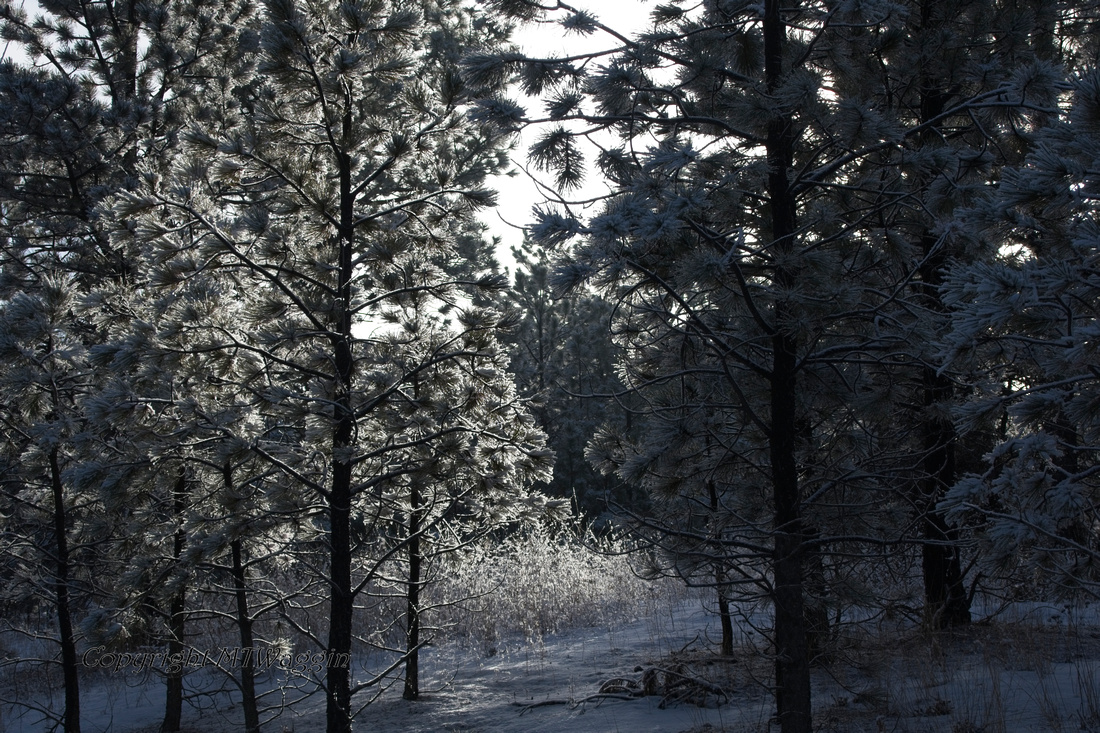 I didn't do the loop but came back down the quiet shorter loop and was amazed at the amount of turkey tracks across the road.  I was saying to myself that it looked like a major interstate crossing in a couple spots but so fun to see.  Imagine my surprise when about 20 of them ran across the road ahead of us!   I of course was wrestling dogs and leashes and trying to get out the camera.  Missed those and then boom - another 20 ran across and if you look close below you'll see 2 of the stragglers.    Not much farther from there I looked up in the trees and there were another oh 10-15 of them.    I knew we had wild turkeys but had no idea there were that  many hanging out. 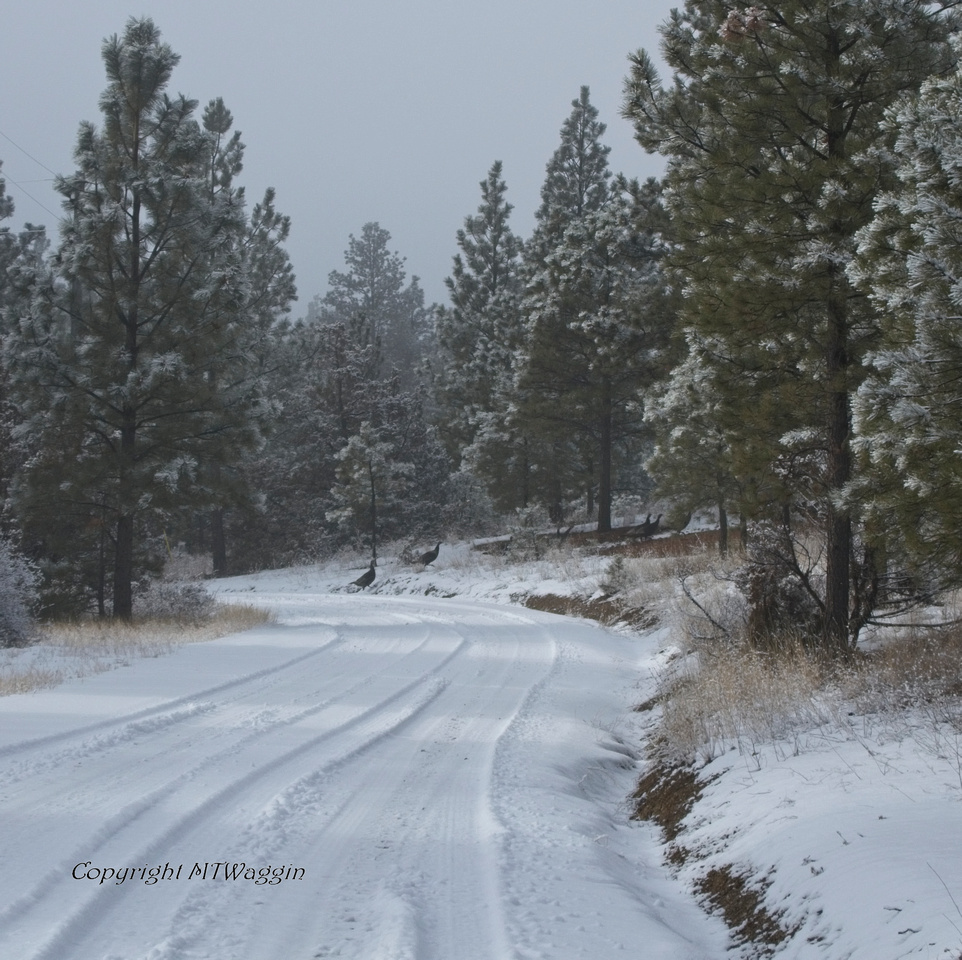 Josie's boots and coat did great and looking at the oh 1/4" of leg that was showing after we got home was really glad I took the time to dress her. 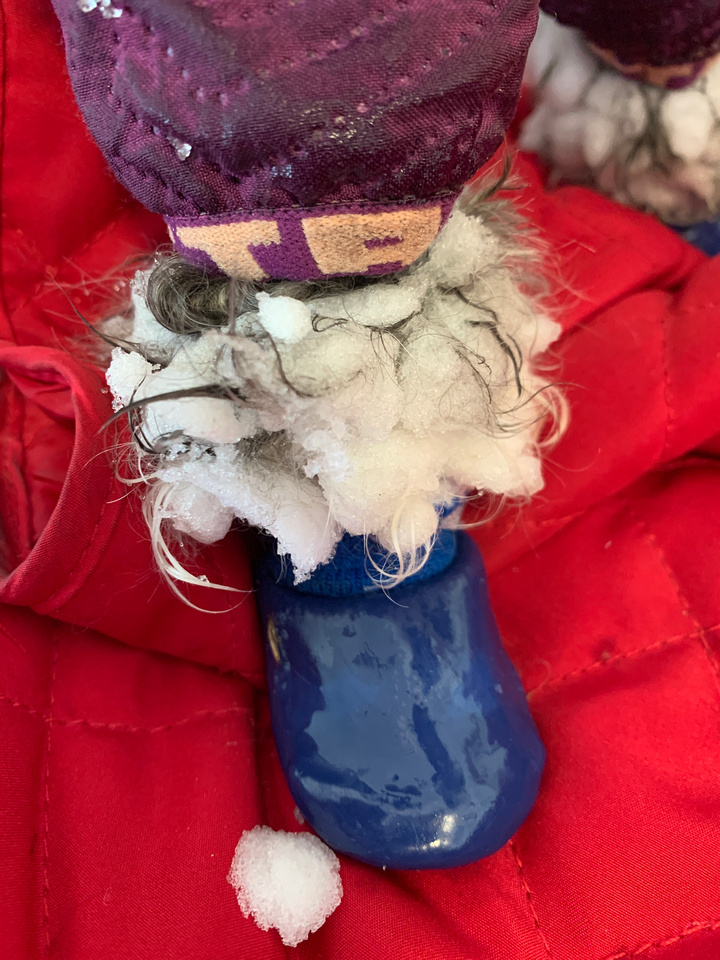 It wasn't a fast slog  by any means - about 90 minutes to do 3 miles but boy lots of excitement.  HA!    Saturday I decided that the  two buddies would stay home.  I honestly was a bit worried how sore they might be with all the slipping around so off I went on my own (weird to be honest).   Same loop but decided to take the opportunity to try out the trekking poles.   New old  gear actually.   I have these for snowshoeing and they ride in the camper but never saw the light.   I hoped they'd be good for the slippery trudge and I have to say, they were.   I want to try using them more but needless to say, don't think I can manage that and a dog on leash.  First impression is that it takes a bit to get the  hang of them (watched Youtube first) but it did seem easier going up the hill using them and what I really noticed is that I wasn't as worried about watching where I was going (i.e. looking down the whole time) and really was able to spend more time gawking around.   Just gives you that extra stabilizing point for sure.   It did seem to help going up the hill as well.    It also helped going down the steep section and when I did slip a bit they did indeed save me wrenching my back to keep my balance.    Did have to lengthen them when I started down the hill and I also found the when I got on the flat and and was a bit more tired, just carried them and walked.     More testing to be done but  I sure see why trail hikers use them. 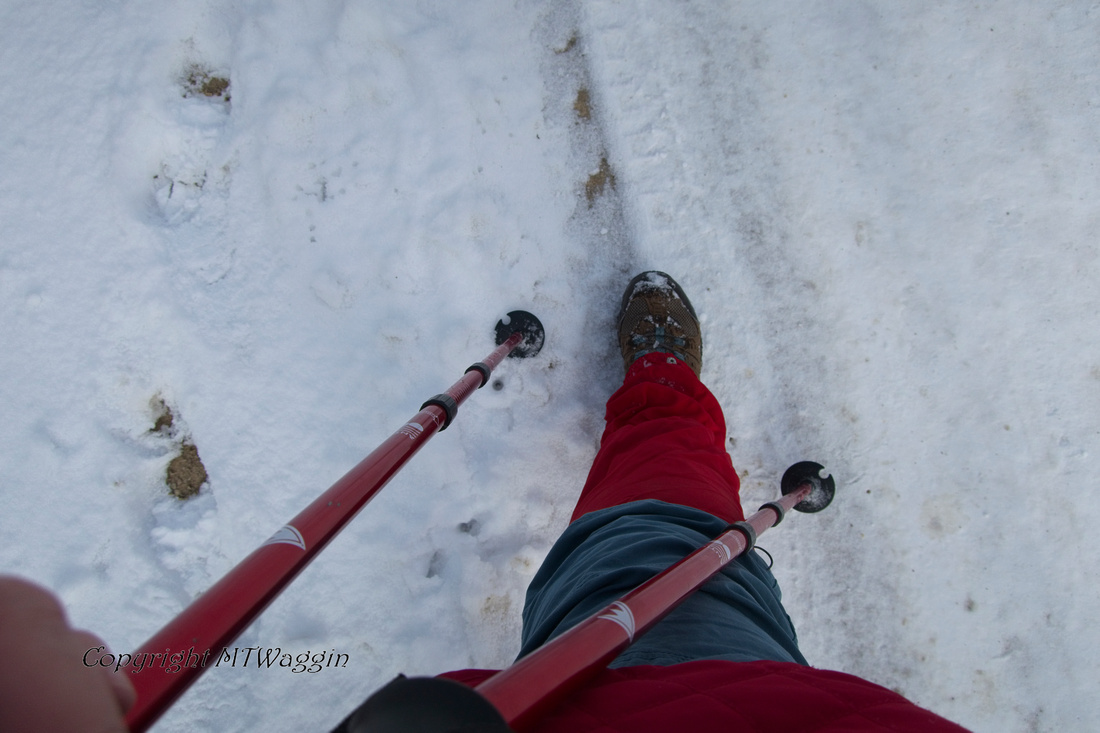 Oh and I dug out my gaiters as well.   My pants got so wet the day before and the moisture wicked UP (go figure) and made  for some cold legs that I was like - duh - use your gaiters (which I always use  for snow shoeing.   Much better.

Now I'll leave you with just a few more  frosty shots.   We had fog overnight and it left a crispy crust on top of the snowy stuff.   Will end with our neighbors Anatolian (one of 2 they have) who has to of course do his job and bark at us the entire length of his property (they have cattle so he is doing his job well). 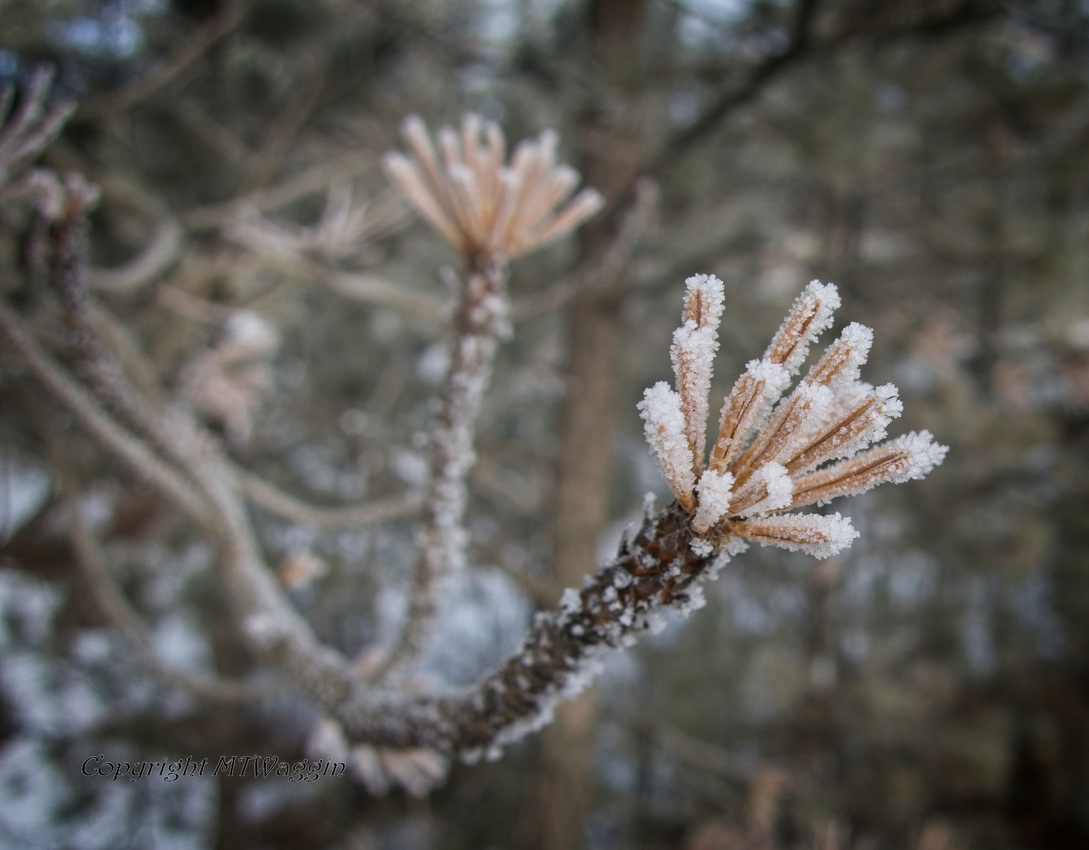 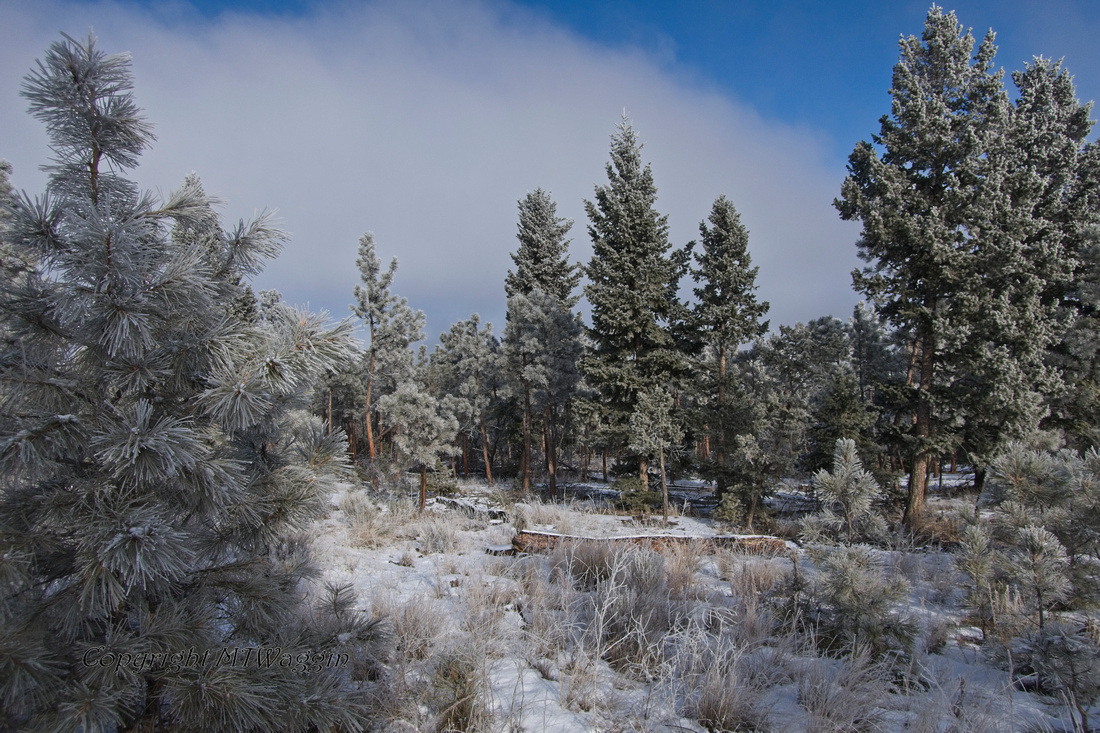 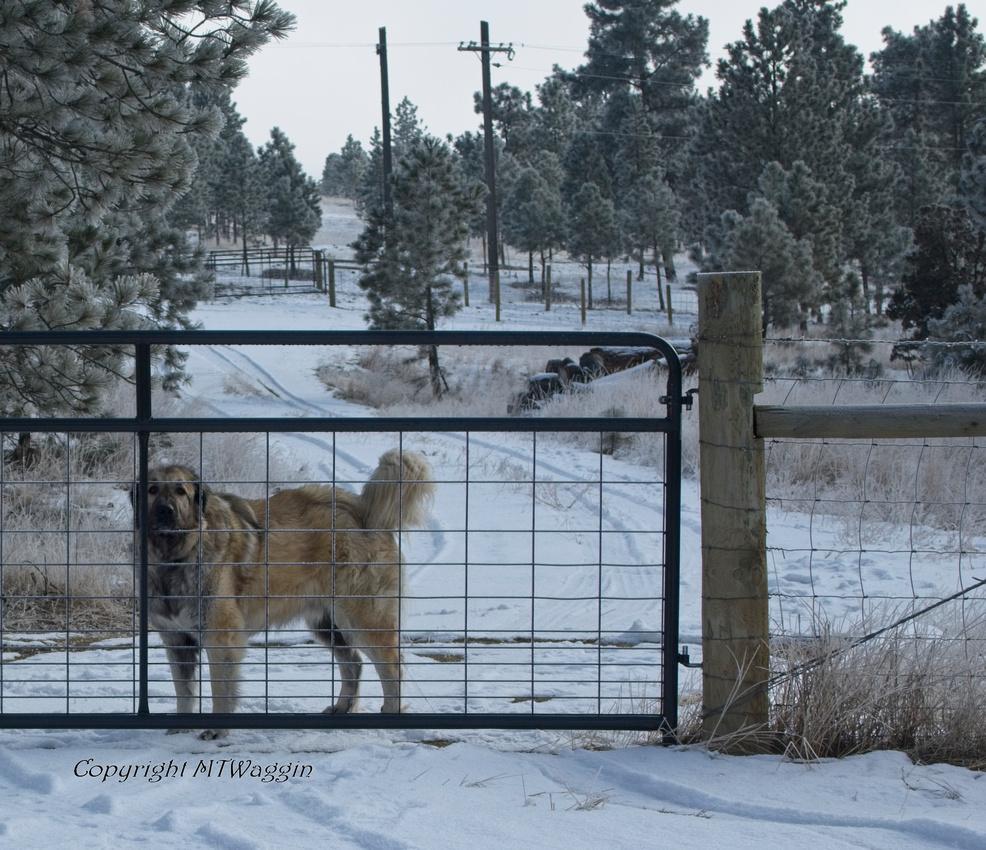 Lori(non-registered)
It does look dry there, hope you get more precipitation late winter into spring. I haven't tried using 2 poles, but I do use a single on my walking\hiking trips. Mostly for keeping my balance on slippery slopes. I'm afraid I would get my legs tangled up with 2 of them :-)
Far Side(non-registered)
I have a pair of Yak Trax and a dedicated pair of old snow boots that they are on. They keep me from slipping and sliding! That is one bog dog!! I enjoyed seeing all your scenery and you found a perfect spot for great photos!
sue(non-registered)
I love it when the days start getting longer.....I love macadamia nuts (I have no self control where they're concerned, none whatsoever.....I love your photos. Snow....not so much
No comments posted.
Loading...
Subscribe
RSS
Recent Posts
January 15-22, 2023 January 9-14, 2023 2023 - Already Merry Christmas November Already Fall Projects July, August, September I Am Still Here! July 19-31, 2022 Week of July 10, 2022
Archive
January February March April May June July August September October November December
© MTWaggin Photos & Blog
Powered by ZENFOLIO User Agreement
Cancel
Continue