So my hope of a post a week just isn't going to happen right now.  Honestly because life isn't that exciting and because I am not that anxious to get on the laptop that often - sad but true.  After being overrun with work and LOONG days on the computer doing it - I just have to force myself to get on and do personal stuff.   So here we are.

My favorite part first.   Walks/hikes.  I'm not sure what to call them, still up in my area on the roads but it so feels like being in the mountains and now that I'm actually now walking one of my loops more backwards - even less traffic (specially important with the a-hole drivers from up on top of the hill that will NOT slow down or move over when they see us).   Epic and I did a few walks trying out the trekking poles and getting him used to them.  He's still not convinced.  We did some desensitizing and even some tug which seemed to help. 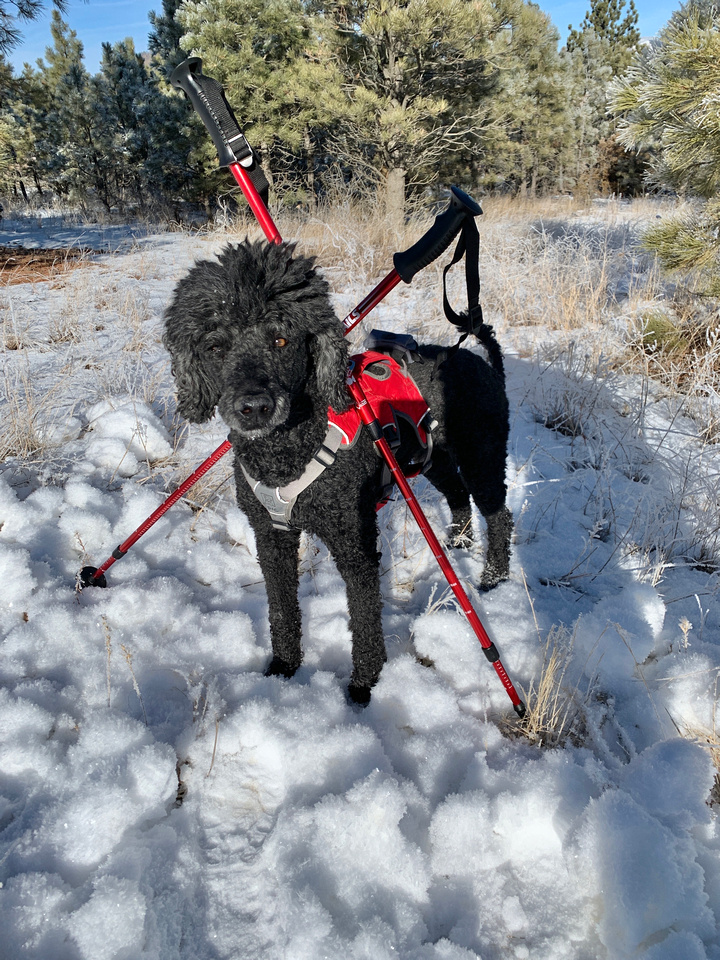 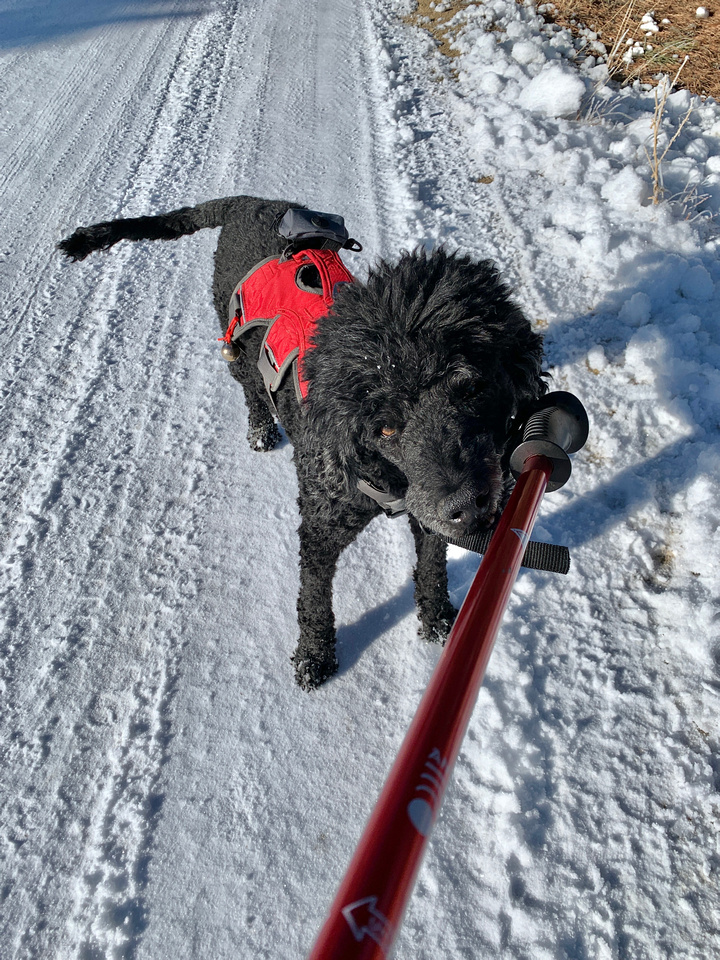 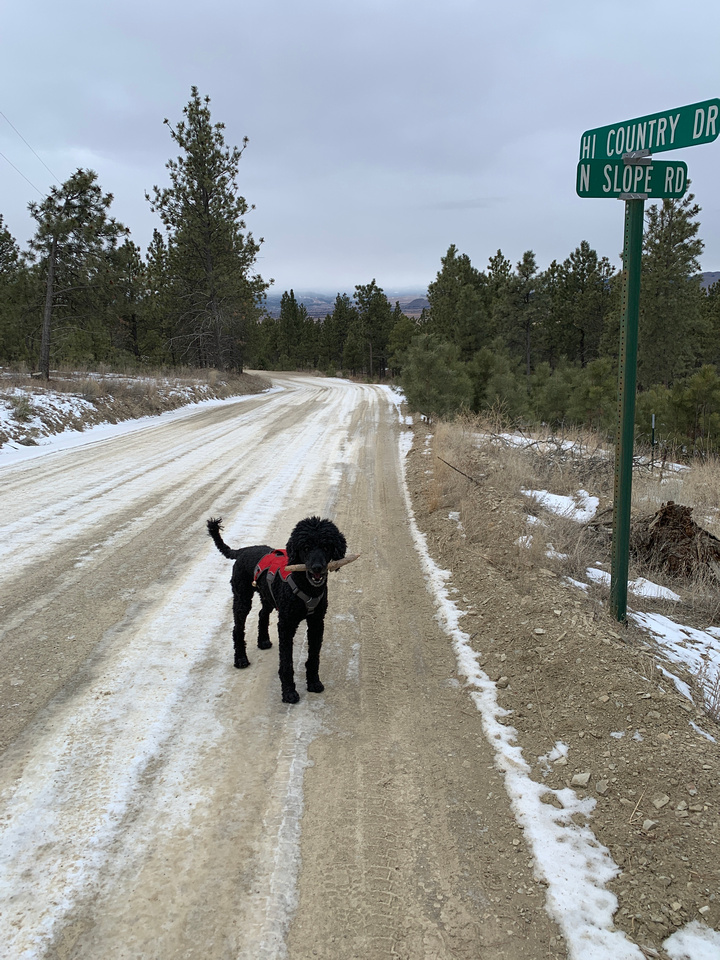 He'd rather not mess around with that stuff, give him his  stick and let him go.   The biggest issue I have with him is getting him to walk ON leash out in front.   A lifetime of teaching him to walk  on a loose leash and on my right or left side is  biting me in the butt.   So I decided one of the things we are going to try is a skijoring harness (to encourage the "pull") and a hip belt for me.   I just really want that stability I get with the poles while not tangling up him.   It's a process.

We had some lovely days to walk and actually today did our first 5+ miler.   Holy crap that about did me in but we did it.  Even Epic was dragging by the time we got back. 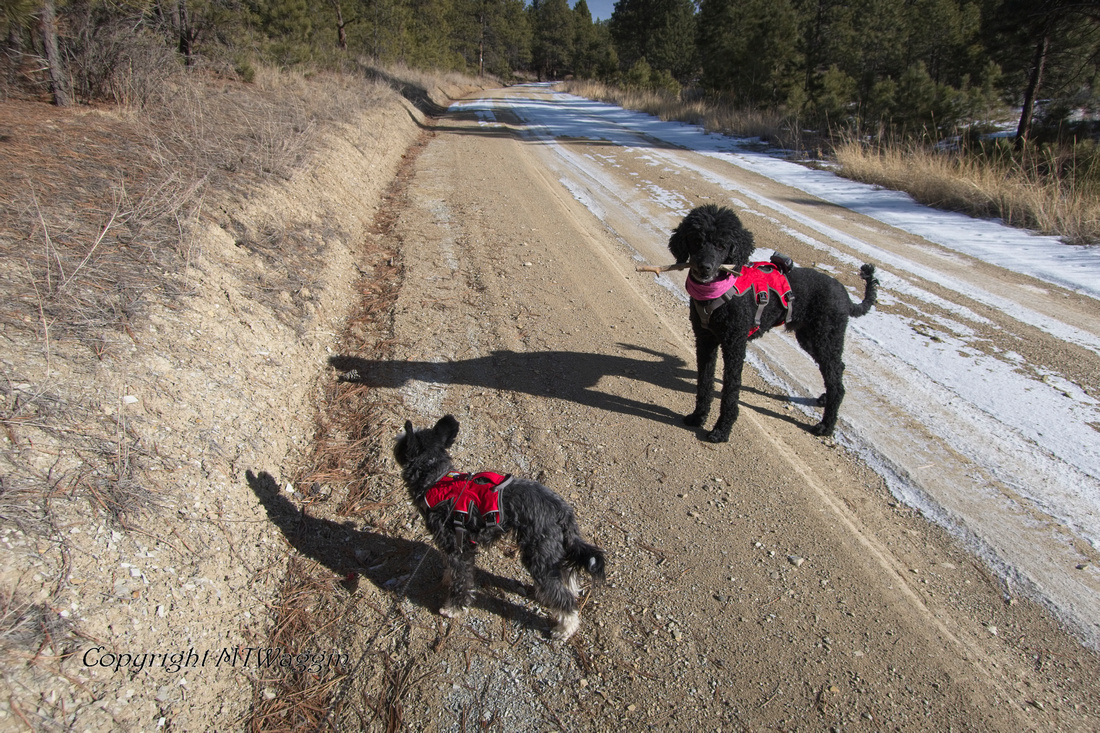 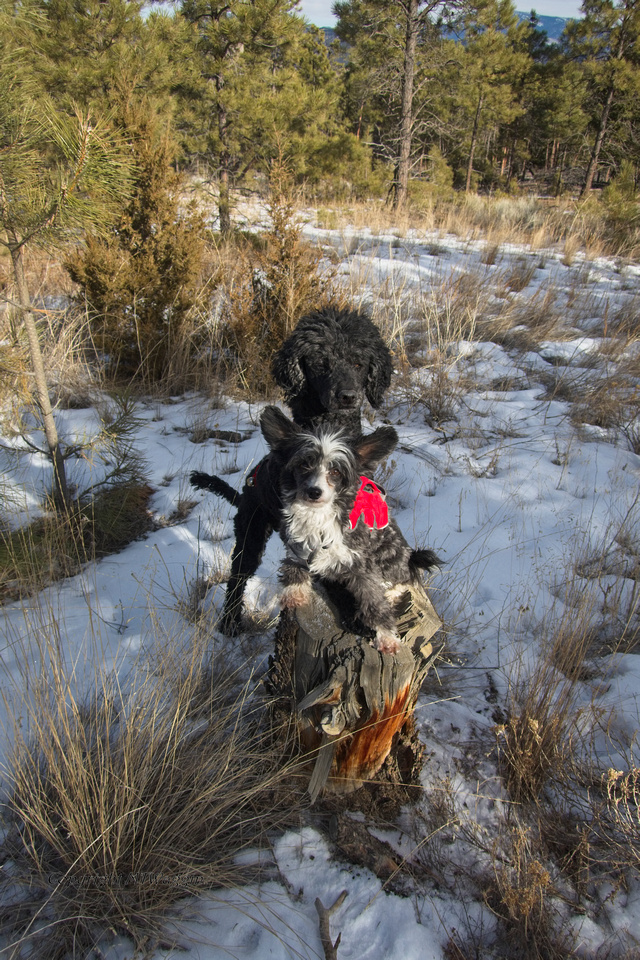 Yup I even got brave and took both with me since we've not walked in 2 days (I was not feeling great Friday and Saturday was just too freaking busy).   Josie continues to LOVE these walks and she explores like crazy, that nose of hers is something.   I don't think I ever showed you guys the long long ago poached deer up the back road. 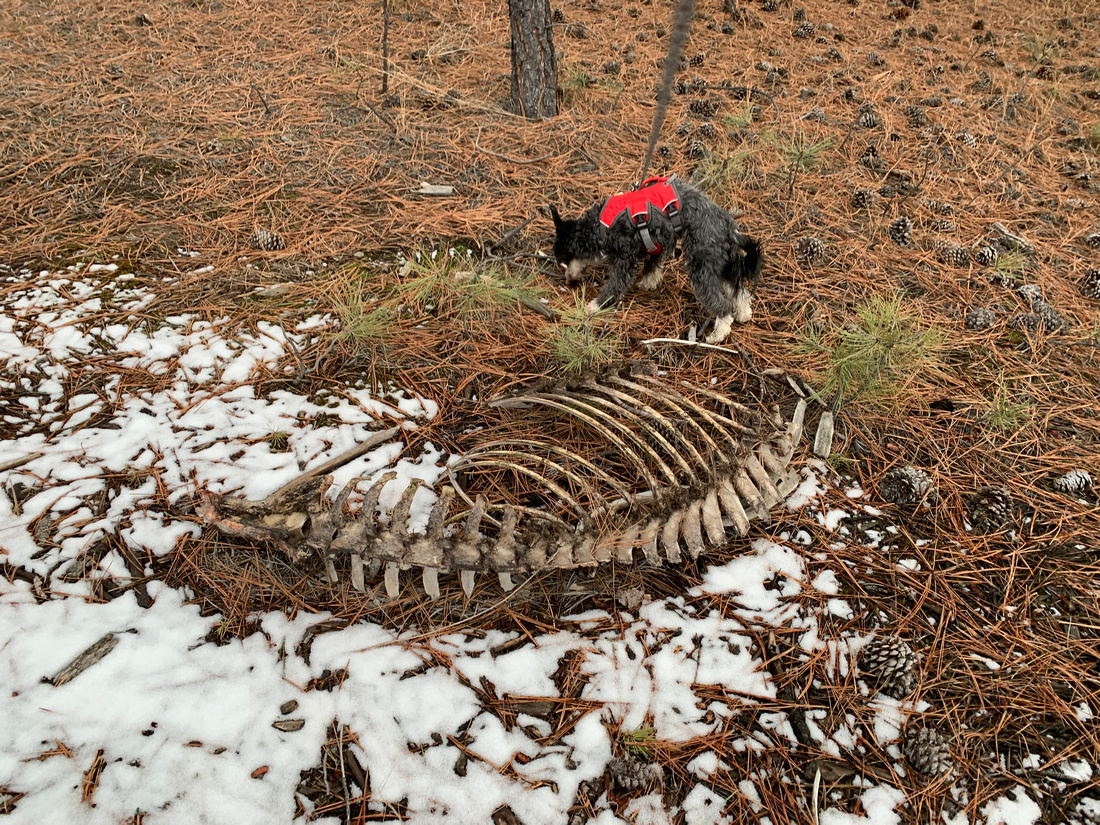 At least I think it is deer but now looking at the pictures looks too big.  I dunno.   I don't normally let the dogs go explore but needed to catch my breath and honestly I know it is a long time ago as there is nothing left and they never even veered that way to smell it.

Josie also got (or maybe it is that I got) a new pack.   She likes to go but needs to have the chance to rest those short legs after about 3.5 miles.   Not only is she short but she puts on probably 4.5 miles for our 3.5.   We did some experiments in the house with lots of treats and today, as she pooped out, I found a spot to put her in and hauled her home to see how it  would  go.   I love the design of the pack, especially the part that the dogs go in (they face forward over your  shoulders not backwards) and she was really secure.   I however found it isn't terribly comfortable.   Because she is a small and the pack is the "small version" it rides so far up my back and on to my shoulders that it wasn't all that easy or comfortable to carry her.  Oh it is way easier than carrying her in my arms but they have some design flaws.  A longer pack with a hip belt would be significantly more comfortable for human.  Still it worked pretty darned well and she took to it very nicely. 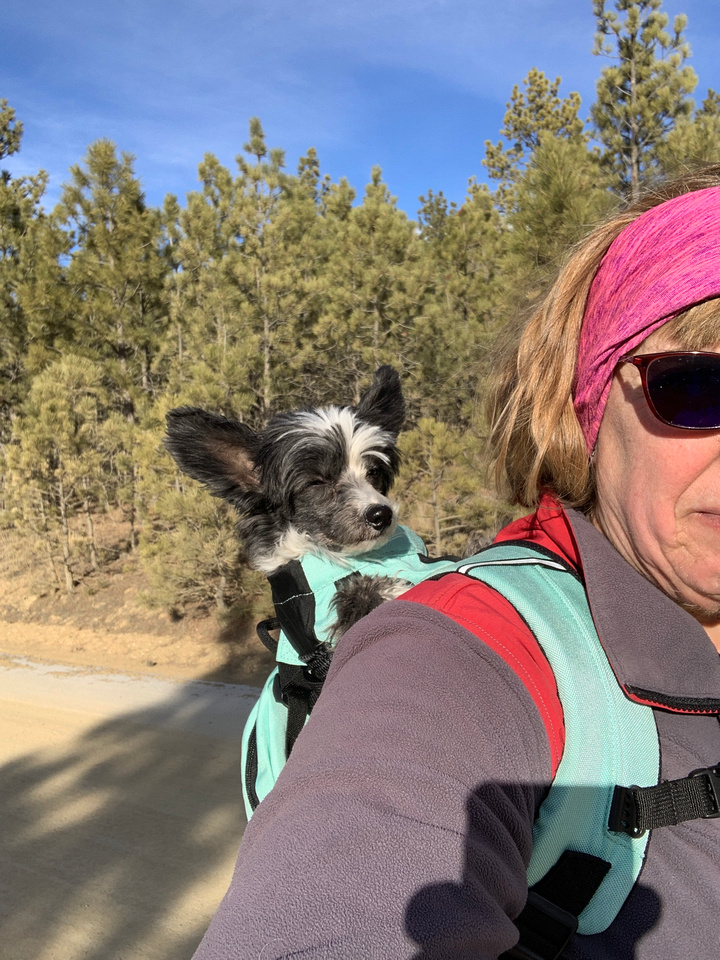 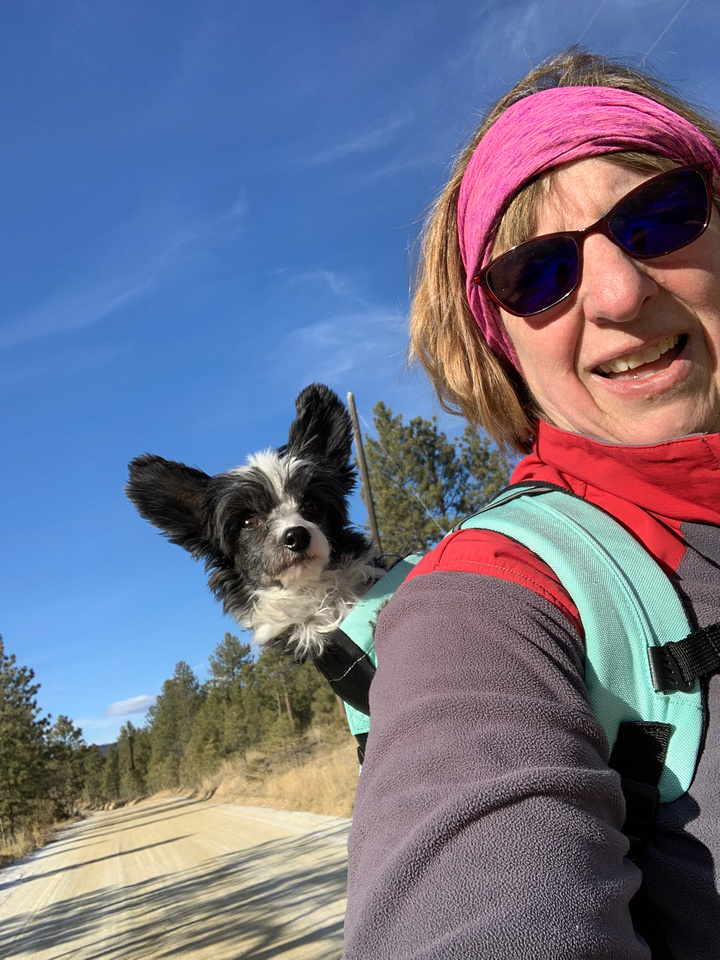 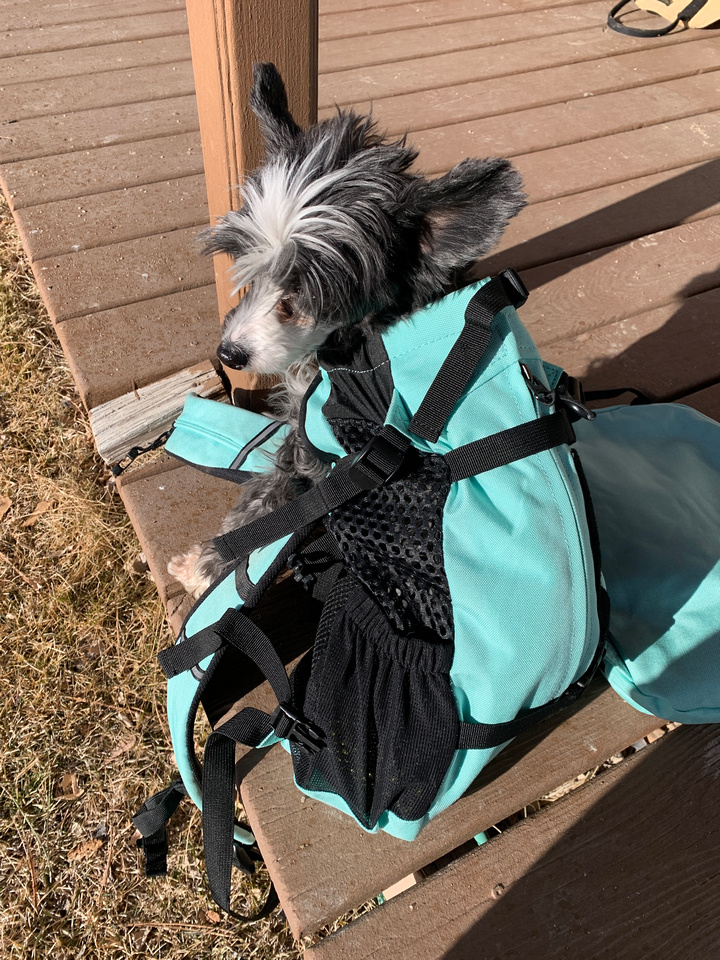 I tell you it really bothers me days I can't get any walk in but I'm trying to just honor my body.  I will say this much, Epic and I walked down to the mailbox this past week one day and that uphill on the way back that always just filled me with dread, was a piece of cake after hiking up the mountain behind my house all these days this month.

My nutritional program is going sort of  okay.   The  first week was stressful and very overwhelming and I told my coach as much.   She just hit me with toooooo much that first visit.   So I backed off enough to do what I could handle right now.   If I stress out over this and get too overwhelmed I won't do  it.    This past week went way better with that mindset  for sure.   I will say, the trying to get more  "logs" on my fire during the day has been way more challenge, I think because one, I'm not that keen on spending precious time in the kitchen cooking and two, I am more of a grazer so I would rather just put things in one at a time.   Work in progress.   But I finally did manage to get my squash cooked off AND have decided my best bet for the sweet potatoes is making them into chips. 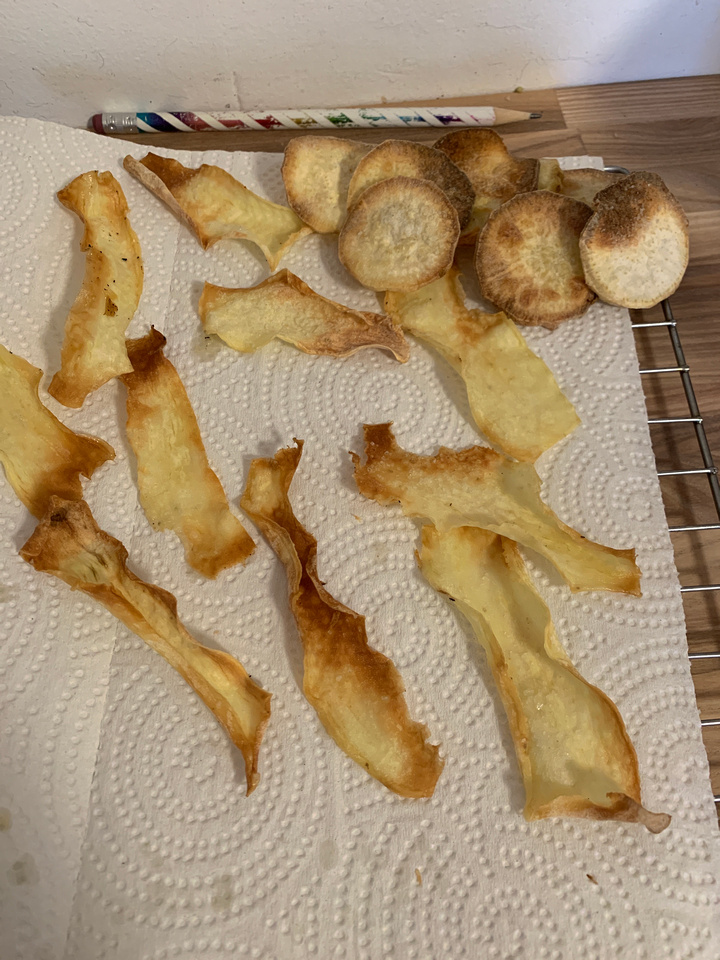 Those ones on the bottom were perfecto.   I need to find a mandolin slicer (a bit worried after I managed to slice of a bit of my pinkie  finger tip just with the new veggie peeler).

We've had some insane weather.   We had a super high wind event one day - as in 60mph sustained at some point.  Lots  of damage in town and around.   Many trees down, power poles, things blown over in general.    Lost some super old  trees in town people lost.   I was rather shocked when I walked up back and found that one of my young trees, not even one that was standing out along was down, ripped up the roots and all (lets face it pine trees have really shallow roots but still).   More shocking is that the old dead tree with the treehouse was all still standing (see it behind the downed one in the photo). 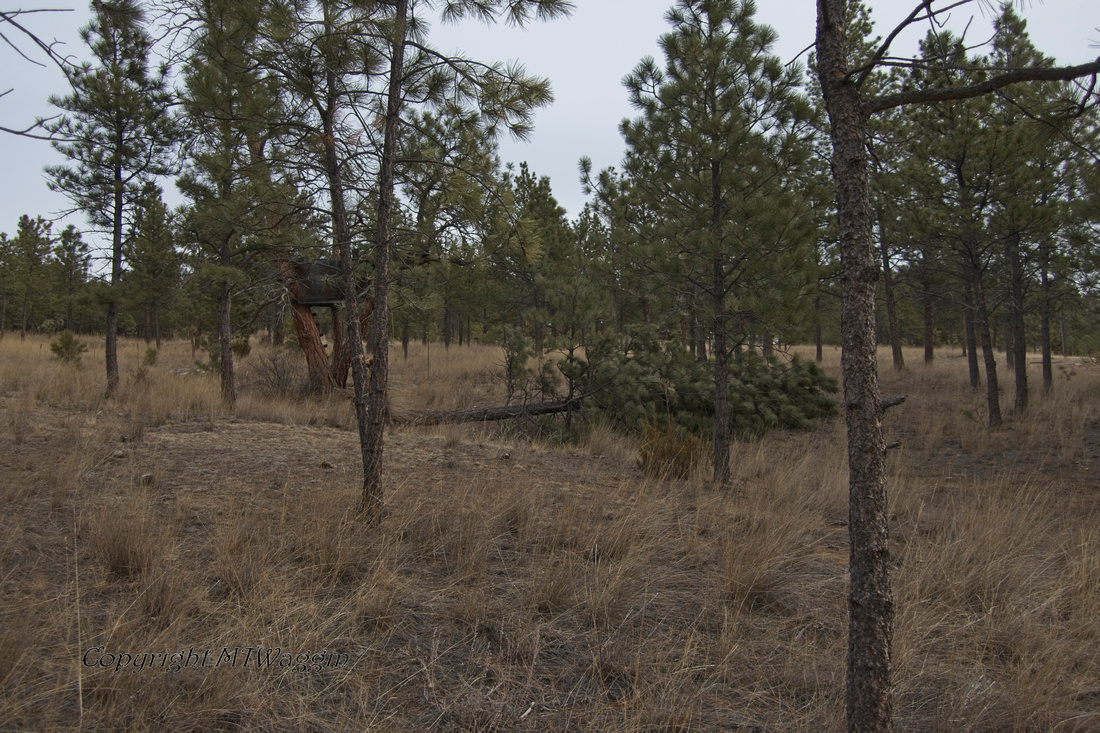 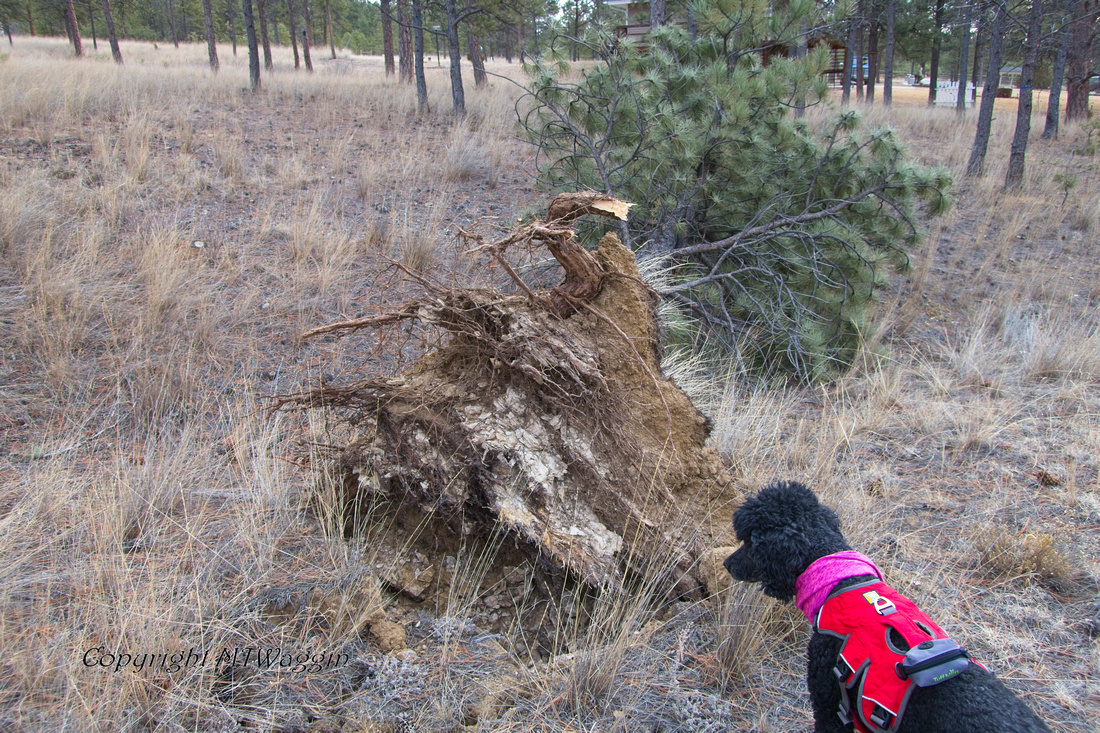 But we've had some lovely days as well - just no moisture which really didn't help the wind event. 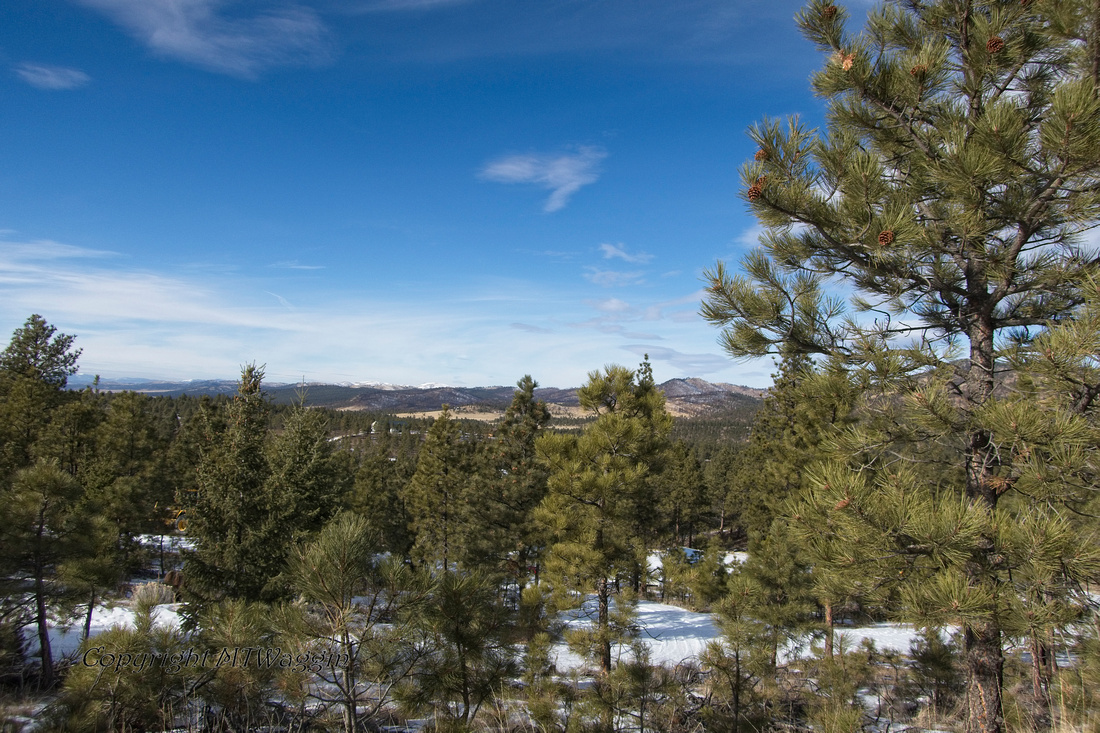 We also have had some stunning sunsets although they've been odd, nights  I think they will be spectacular, I set up the time lapse and they are blah. 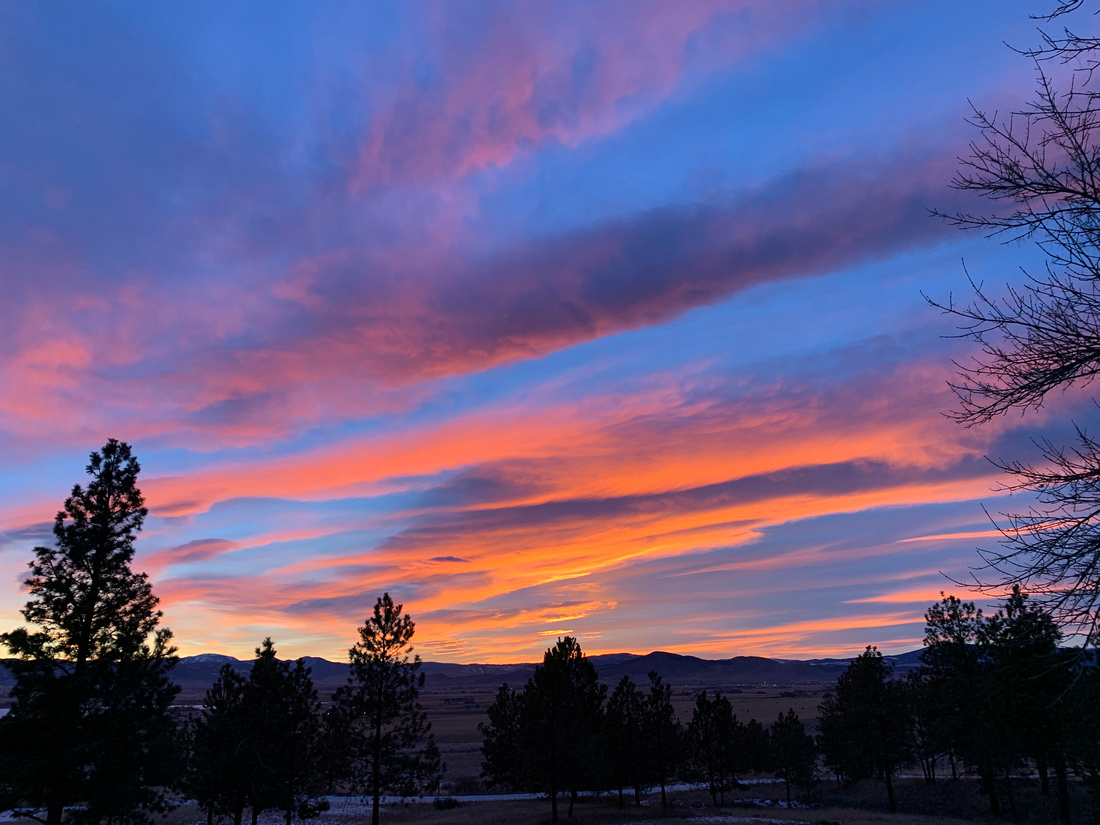 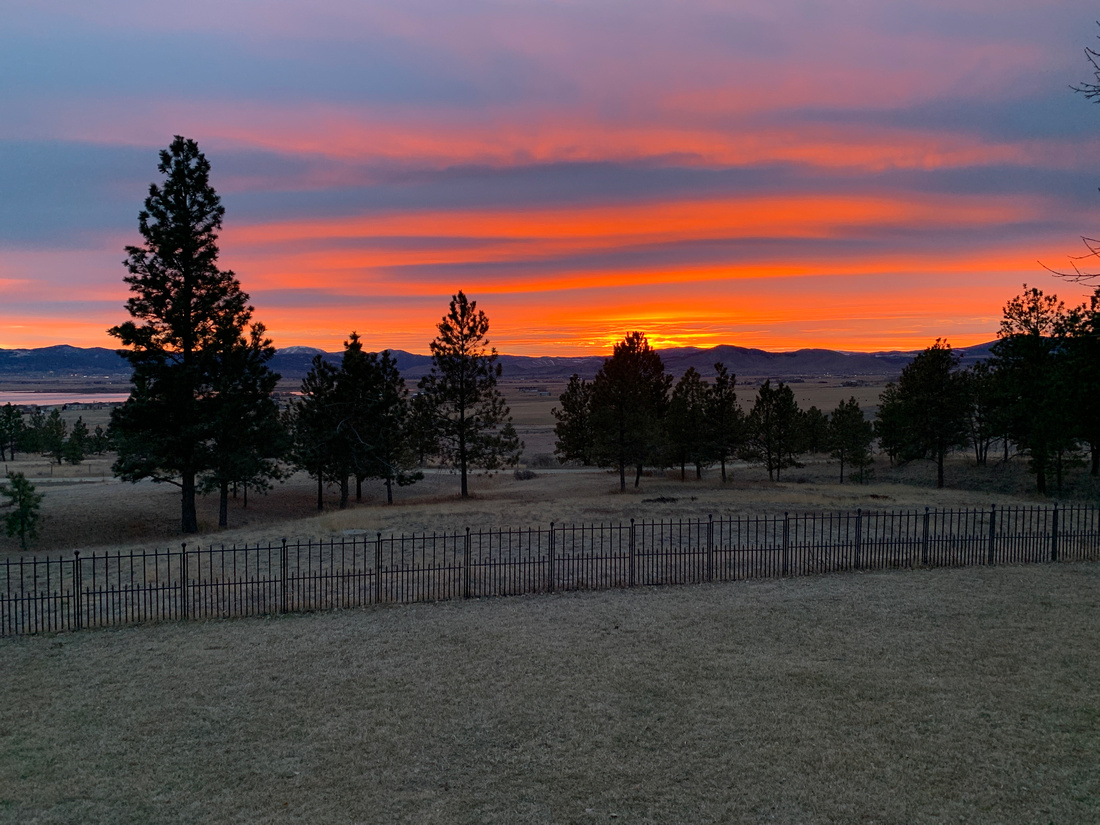 There has also been planning and computer time (more of it) to do things like  figure out how to get my drivers license renewed (what a pain in the rear) as well as the much more exciting trip this summer to go pick up my Mom and bring her back here to visit.  I'm super excited to be able to have her visit this summer after missing the last 2!   Since I have loads of vacation  time to use, am stir crazy not having camped much I told her it would be safer for her and no problem for me to just hook up the trailer and come get her.   I have 2/3 of my camping reservations made and the last one is at a state park that doesn't open up their reservations for another month or so.   We'll see how it goes but I'm excited.

Okay kids, I'm all about Masterpiece Theatre on Sunday nights so this is gonna get wrapped up and published so I can make some popcorn and sit down and watch PBS!

Linda W(non-registered)
Thought I'd drop in and say hi! I love the doggy backpack! Nice sunset! I forget how much more sunny skies there are back in MT and SD....Guess I've lived in Oregon too long, I'm used to clouds.
Far Side(non-registered)
Gene says most likely an Elk:)
Far Side(non-registered)
Josie is so cute in that backpack! Always fun to see your dogs! Beautiful sunsets...that wind was awful....we had it here one night. Stay safe! Good to hear you will get to see your Mom again!
Lori(non-registered)
Looks like an elk skeleton, not deer, to me. I love the selfie with Josie looking over your shoulder - she's pretty darn cute! And 5 miles! WOW - you go girl! Guess I need to quit whining about being busy\too wet\too cold, and just start hiking my hill. :-)
No comments posted.
Loading...
Subscribe
RSS
Recent Posts
January 15-22, 2023 January 9-14, 2023 2023 - Already Merry Christmas November Already Fall Projects July, August, September I Am Still Here! July 19-31, 2022 Week of July 10, 2022
Archive
January February March April May June July August September October November December
© MTWaggin Photos & Blog
Powered by ZENFOLIO User Agreement
Cancel
Continue