Most of you know enough about me that I always have a few "projects" going especially in the Summer.   One of this Summer's projects is my taking a real initiative to build my somewhat tattered relationship with Iago my scarlet macaw. 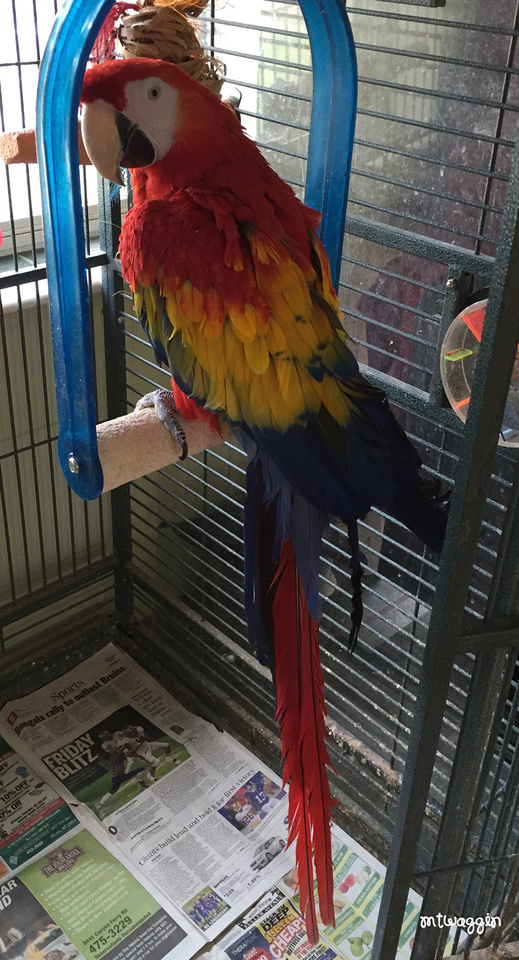 Iago came to me in 2003 when she was about 2.5 years old (she was hatched in 2000).   She came to me from the breeder here in Montana that I got my first blue and gold macaw from back in the late 90s.   She and her clutch-mate actually had been to my house for a few days back in 2000 when her breeder had to evacuate due to wildfires.  At that time I hand fed them and took in a few other of her macaws.   Alas it was just a few days and I wasn't interested in having another big bird (and Rio was really my heart parrot).   A few years later I actually contacted the breeder about my possible interest in an African gray parrot.  As we had conversation she said she had this young scarlet that she really wanted to find a home for as her wasn't getting the attention needed in her aviary/home.   If I was interested she would love to have me adopt her.   I pondered for a couple weeks then said I would.   Now remember she had been hand fed however had very limited interactions past that.   She was a good friend for my blue and gold but I will be the first to admit, she wasn't as tame and therefore got less attention/training than my already trained and super lovable cuddly blue and gold.

So here is the truth:   I did work with her some but not to the relationship building work I should have done.   Life intervened and I lost my blue and gold (still a hole in my heart 10+ years later).   I also got busy with my house, relationships and my other animals - mostly my dogs and dog activities.   Since then Iago has really kinda just been in the background of the house.   Interactions outside of her cage are minimal as I just wasn't set up to manage having her out and the dogs locked up. 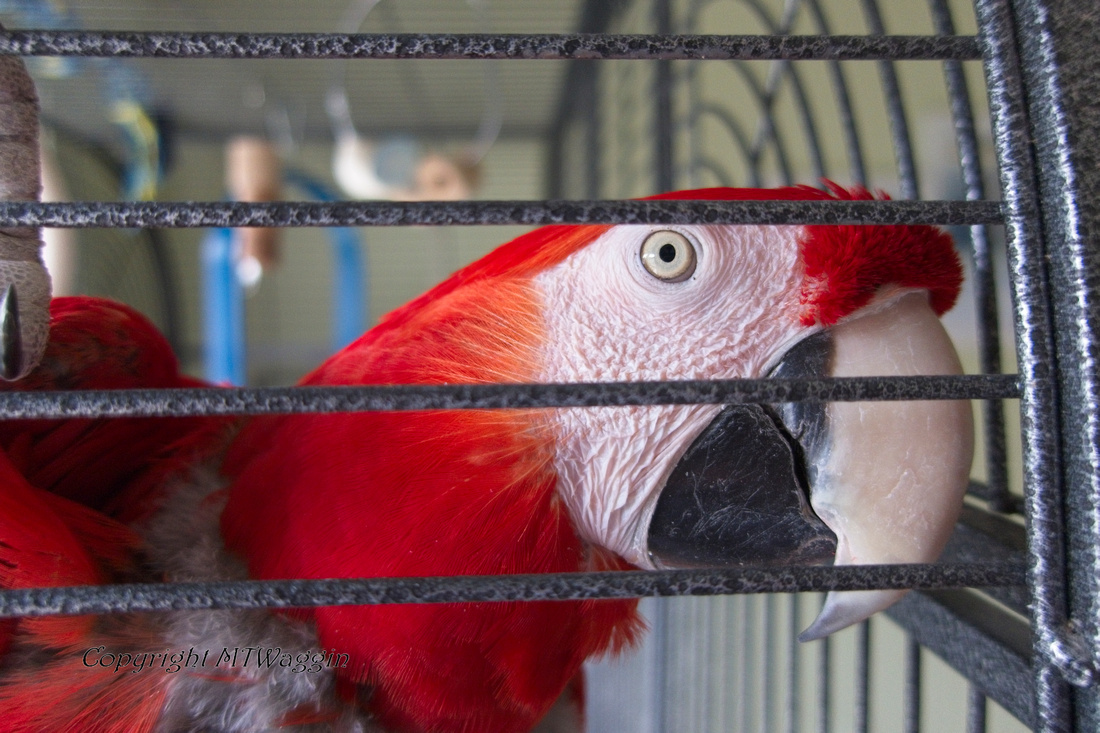 Iago is very definitely a girl, we have had eggs to prove it!   Hormones for sure play a large part in her "attitude" (as I've gone thru the Horror-mones video with Bird Tricks).   She also is VERY cage territorial, even to feed a piece of something yummy in thru the bars of her cage results usually in a beak hit on the cage bars and grabbing what she can and dropping it.   She is very angry and I cannot blame her - much of that is on me the rest I'm putting on the hormones (no worries Iago - I personally know how that is).   What breaks my heart is that we've seem to have lost ANY relationship we might have had (and she shows it even in her talking when the pet sitters visit or company comes but not when it is just us).

She has been eating primarily Pretty Bird Macaw pellets and some soft cooked foods (which she really loves and I will hear her cooing as she eats that - now realize that too will play into the hormones - man those things suck).  She has also always had food available full time.  She has a large cage (6X3) indoors and is positioned in the family room by the sliding glass door or windows as she seems to enjoy being able to watch goings on outside.  She always has toys and (to my now realization) love loves having bags and paper to rip up (nesting) in addition to those hanging type toys.   She also loves nuts in the shell (walnut especially).

We have had a few summers where I have also put together her old cage outside and put her on the back patio with us for some new scenery.  She seemed pretty indifferent to that but didn't resist and I think that outside time will be something she will enjoy.

So here we go.   I now can't say all of YouTube's algorithms are bad.  A "recommended" video popped up from Bird Tricks.   I watched and discovered Jamieleigh and Dave using clicker training and targeting with parrots.   Oooooo I said, I can do that (since that is how I train my dogs and have been for years).  Why hadn't I thought about that!?!    So binge watching ensued and as with most of my training....motivated me!

They also focus a great deal on sleep and nutrition - another juicy bit for me (again I do it with my dogs but Iago has been on the back burner).

I ordered some of their courses, continue to watch videos as well as their pellets.

And away we go!

Go to feeding twice a day (like I do the dogs duh) instead of leaving food in for her all day long for her to eat at her leisure.  This will help in tracking nutrition, weight, and training (why would she want treats and train if she can just go back in her cage and eat what she wants - treat value not withstanding).   Having that food sitting their also doesn't help with her cage aggression and territorial issues.

CHECK (and no she isn't thrilled but honestly is okay with it and I have oh so much less waste!) 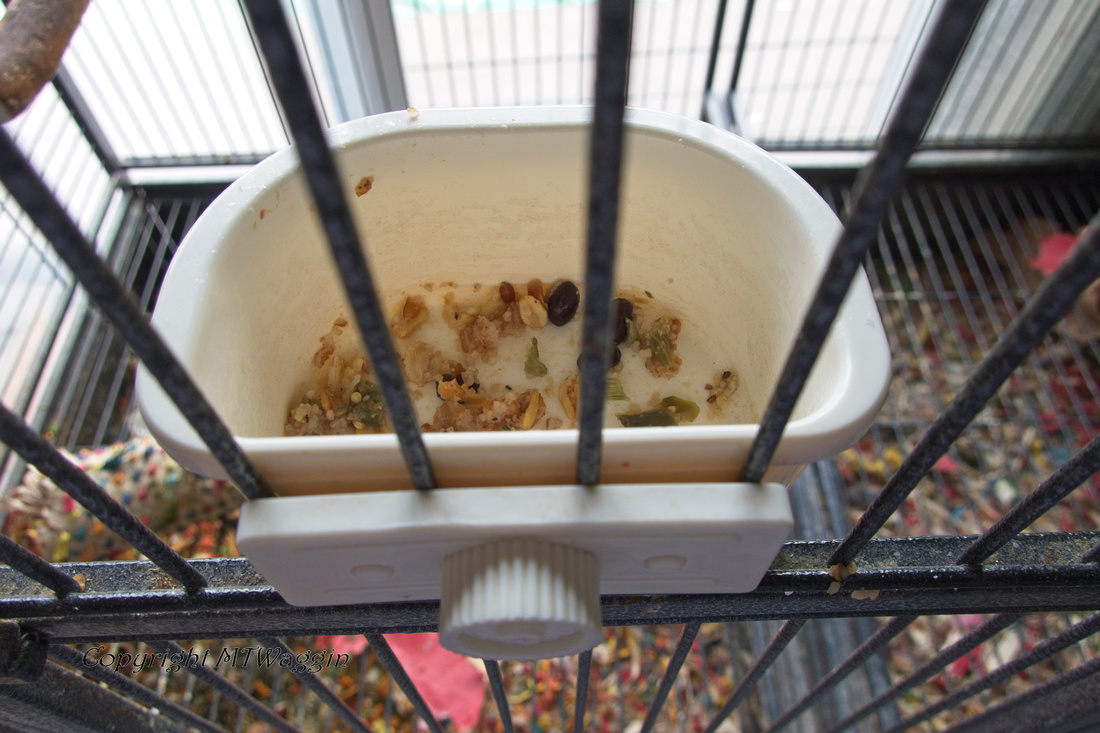 Remove all that nesting type material from her cage to help with the hormones (nutrition and sleeping will also help).   While it was cute to watch her with the bags and all it won't help with her being territorial - PROTECT THE NEST AT ALL COSTS! 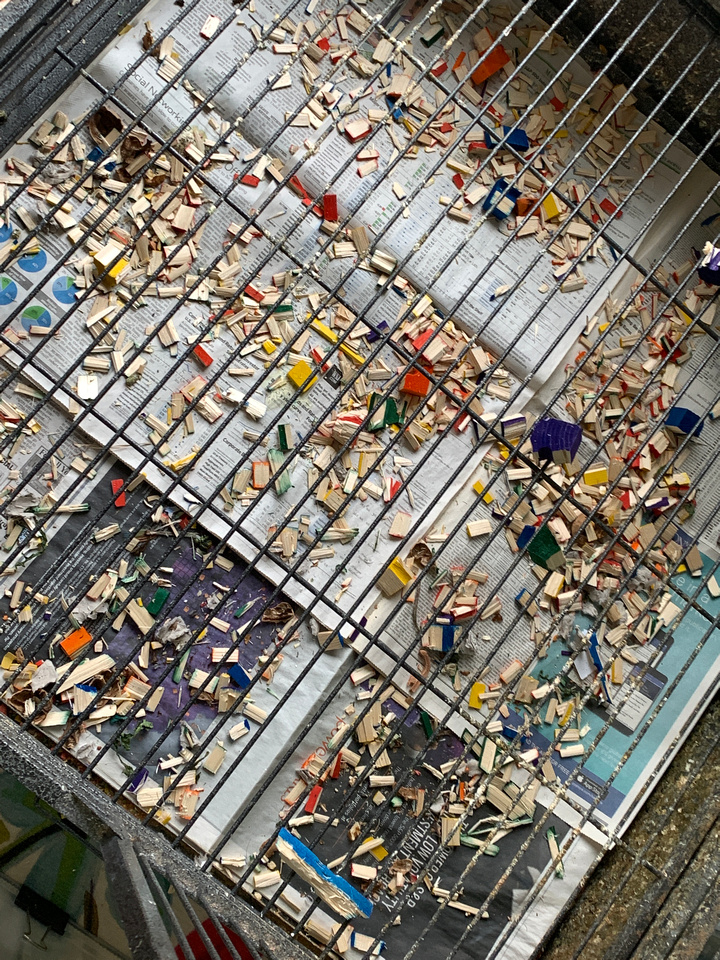 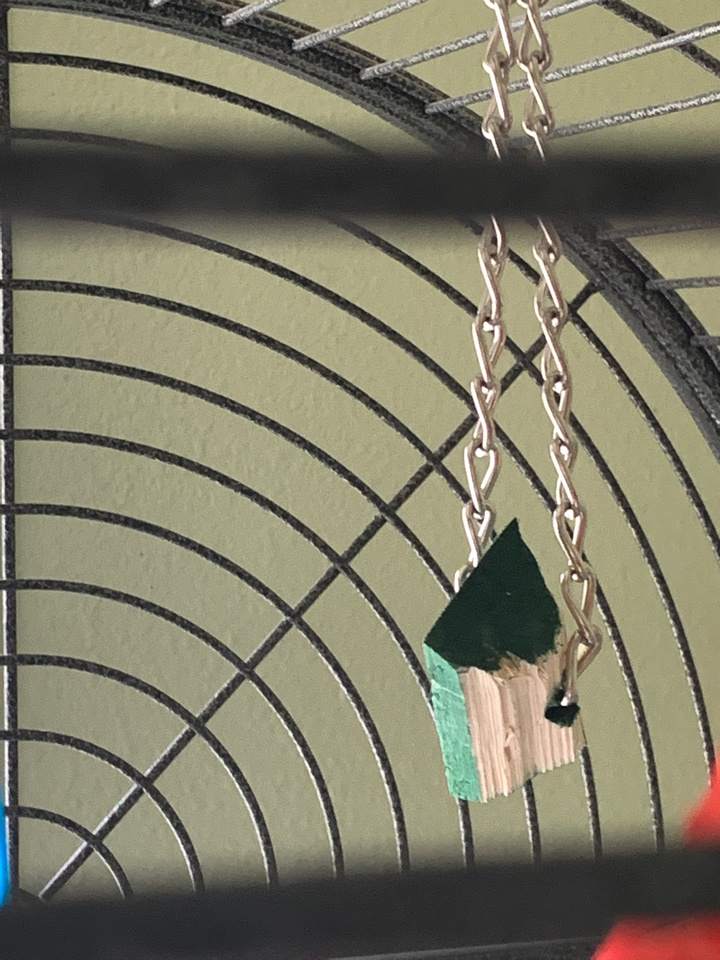 New and better nutrition.   She will be going onto the Season Feeding System promoted by Jaimieleigh and Dave (because it makes TOTAL SENSE) and on to their more balanced pellets.   This should help in all areas of her life honestly.   I spent a few hours (and a shopping trip for a new Ninja system - no worries, two of my other appliances are now headed to the thrift store) working on this.   Soaking beans, cooking those, then figuring out the ratios and cooking of the other grains, then massive food processor work with the fresh veggies.   This makes 4+ months of fresh food for her so that makes the time justification easier.   No bowls big enough so trash bag in the sink for mixing worked marvelous! 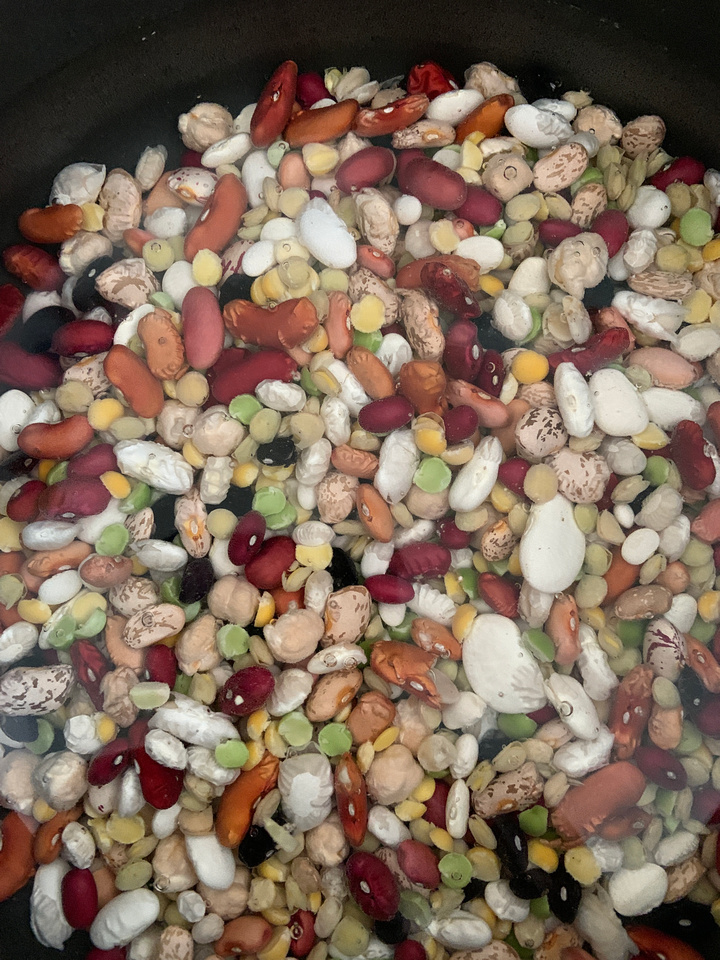 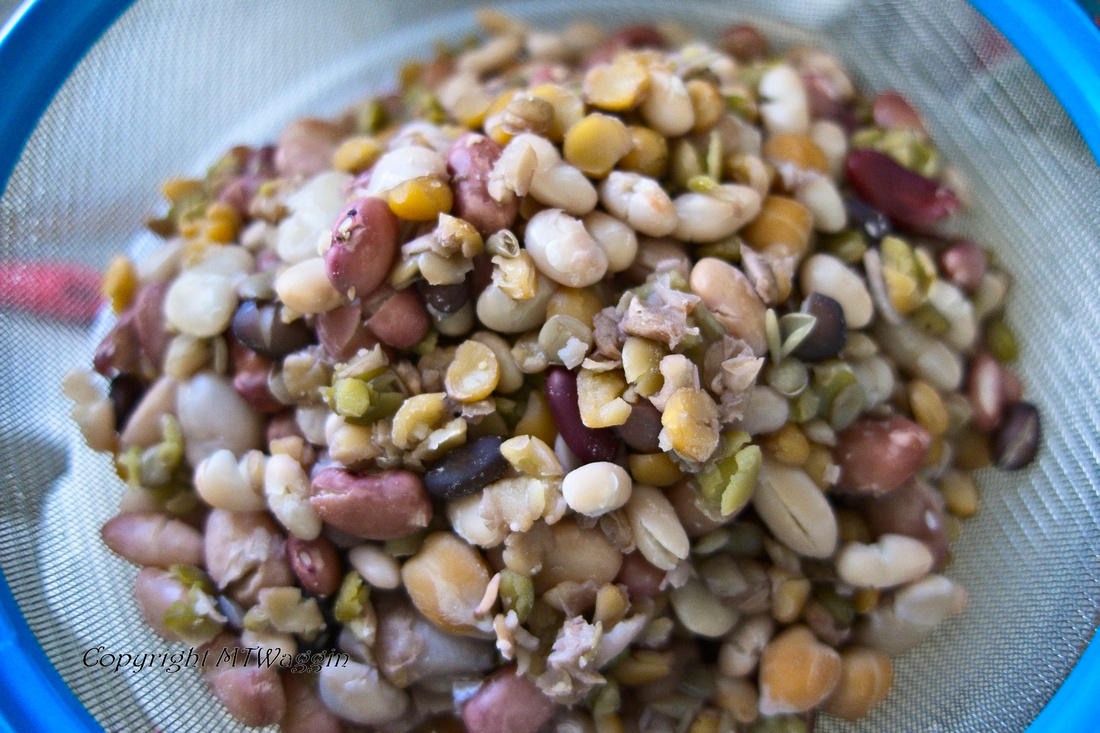 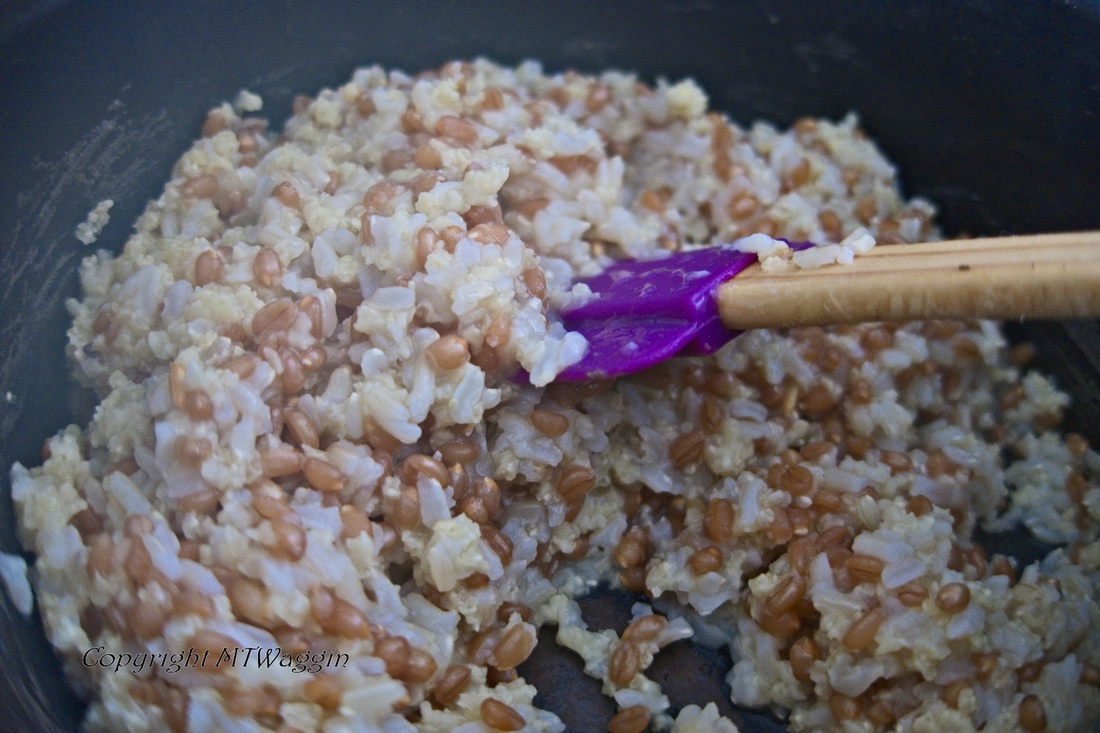 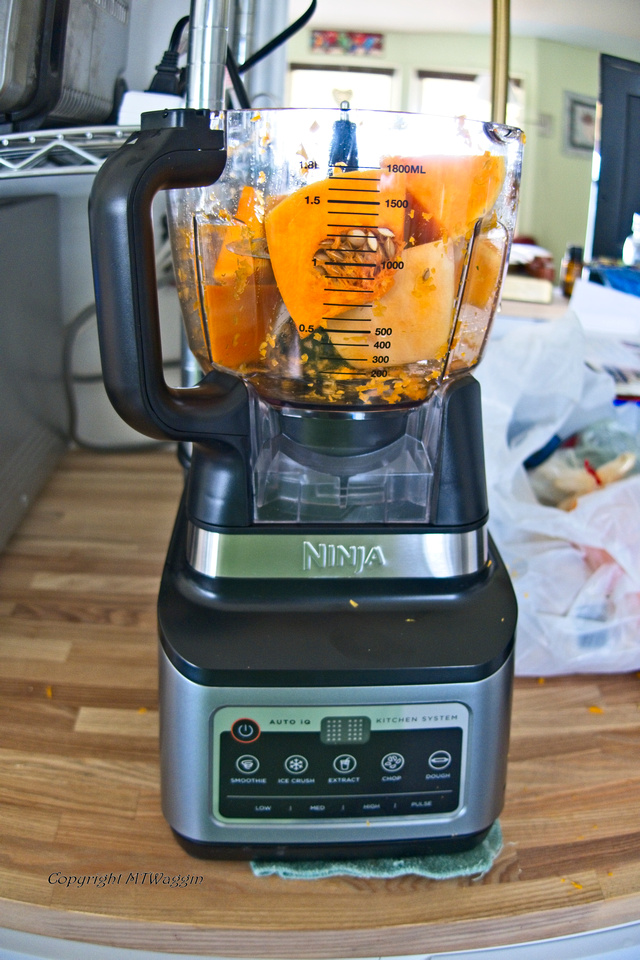 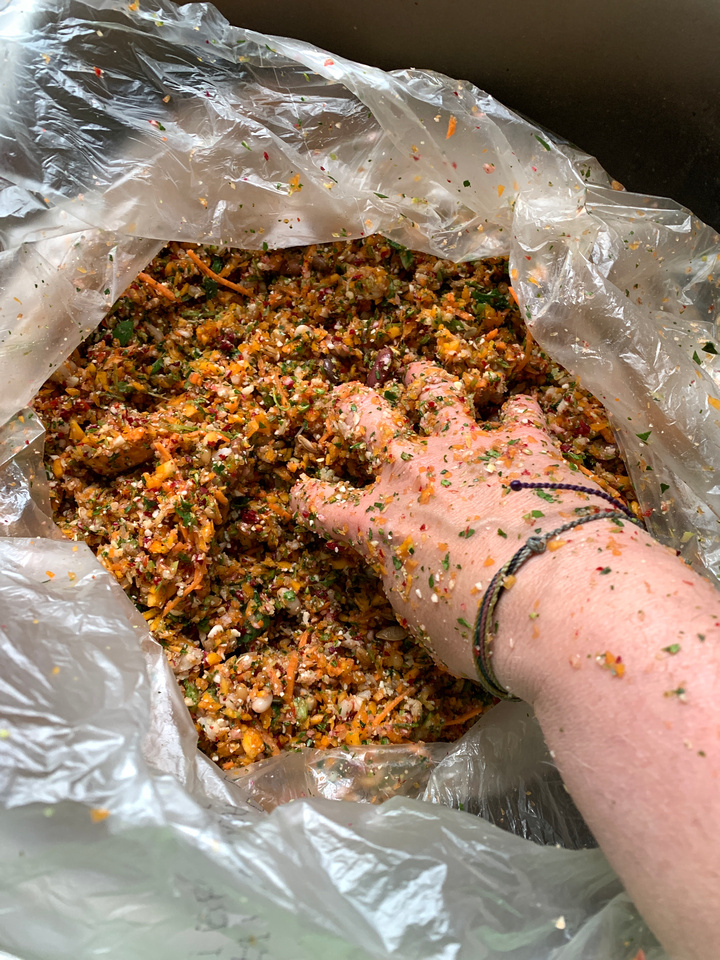 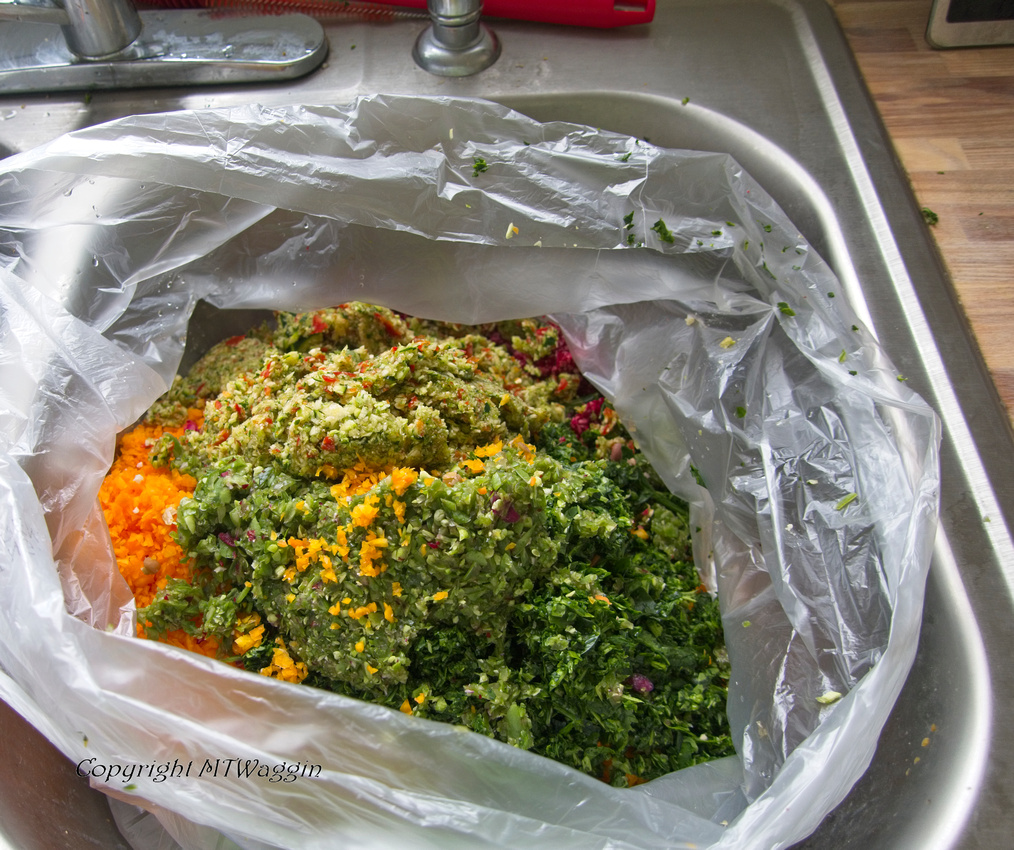 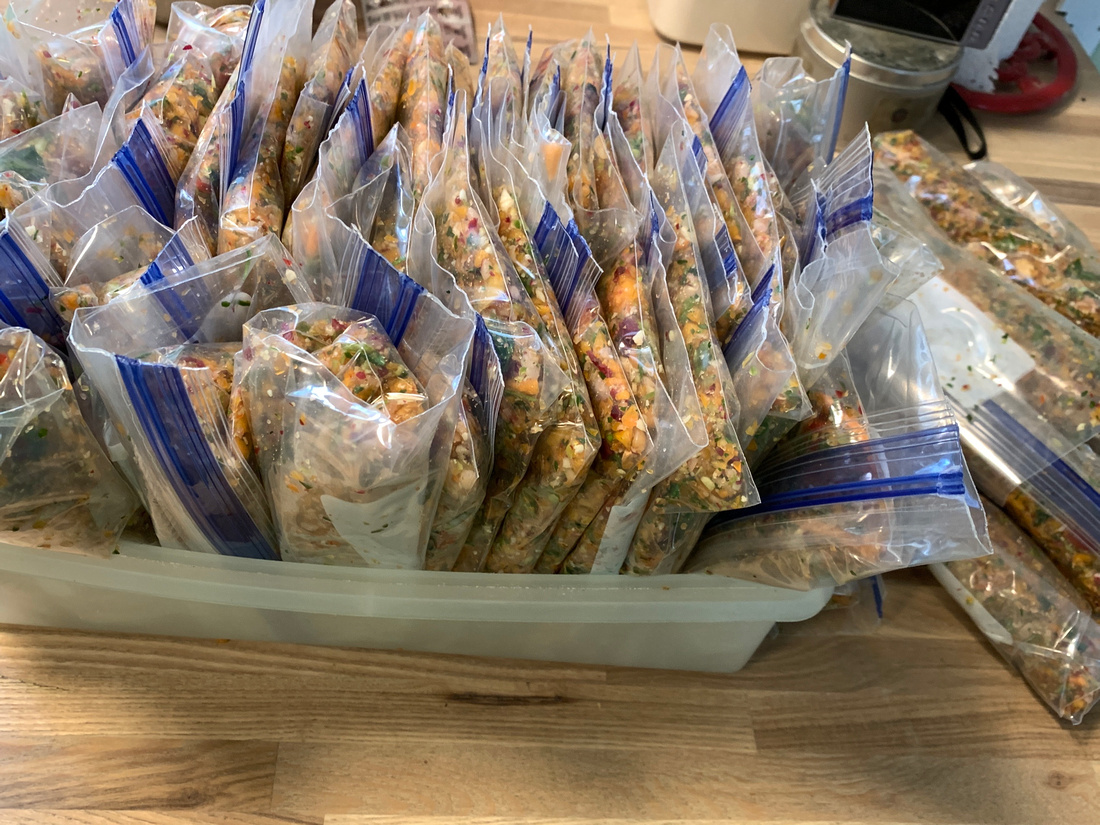 Am also trying my hand at sprouting some of the beans and have also gotten a new sprouting system to use but won't be doing that until I see she really is going to take on the new "chop". 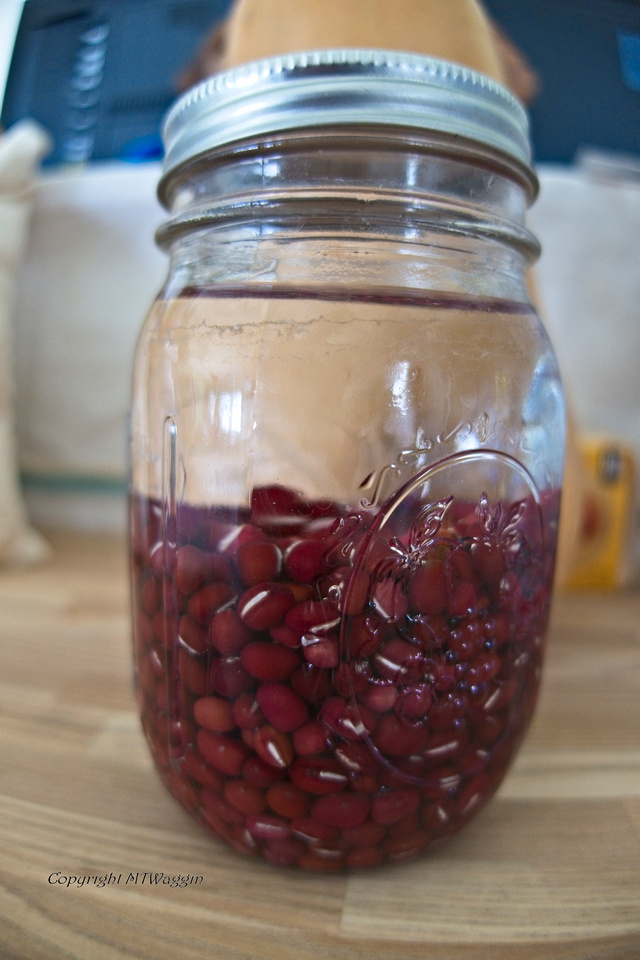 ONGOING - started this week.   Day 1 - she wasn't thrilled but did at least have some tastes of the chop (once I added a bit of walnut powder in) and of the new pellets (they ain't sweet sugar anymore).    Honestly she is tricky cuz I have seen her literally go 2 days not eating pellets while I was gone because the sitter gave her nuts in the shells so she "held out".   Just gotta work on "out thinking her" and enticing her.  Day 2 I mixed some of the little bit of cooked package food I had left into the chop - she was much more interested in breakfast and has sampled throughout the morning.   I also added a few pellets in it just cuz.

Better sleep.   Tough one especially summer in our house as it doesn't get dark dark till 10 and is light at 5.   At this very moment in time we make it as dark in her cage (remember getting her out is a problem at the moment) as we can but will be transitioning to a sleeping cage (may also be her camping cage as well - a DIY project is in possibly in the future).  She'll then be in a room where I can control the darkness so she gets that 10-12 hours of real sleep without interruption (dogs, menopausal Mom, company etc.).  Some rearranging in the household for that.

Way more baths.  I added a humidifier next to her cage already but I am going to really focus on getting her bathed to help that feather condition (as will sunlight and nutrition).   Anxious to see that all improve.

Once she has some time to get used to all the above changes we will start getting some training going.   I have a new stand/perch built for her and will be utilizing that.   (I do need to shorten it though and then add some weight bags on the bottom to stabilize. 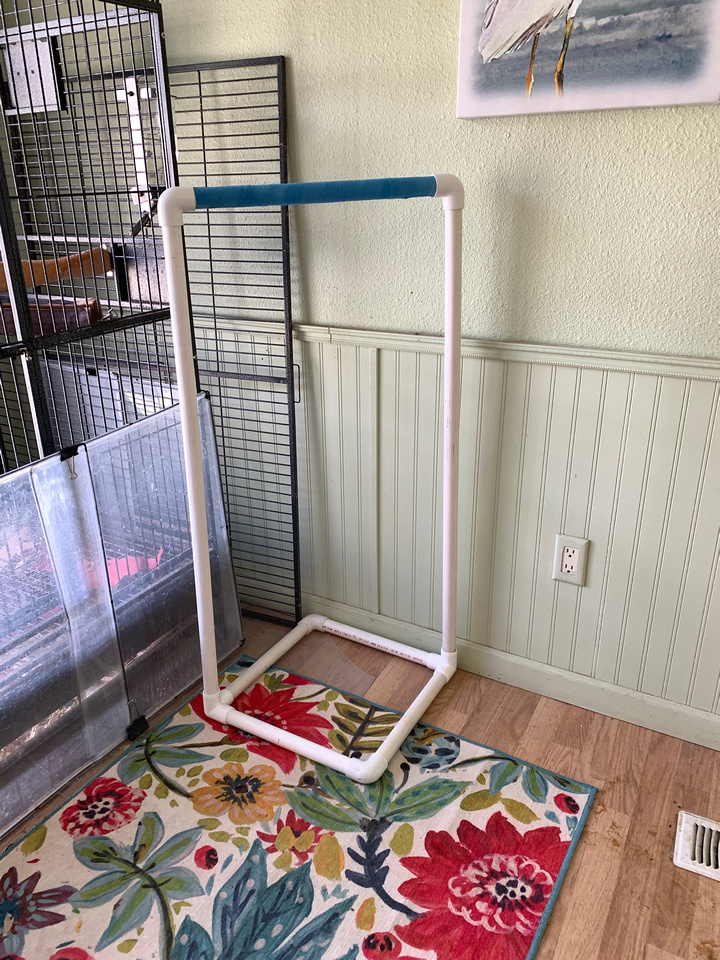 Honestly once out of the cage (even to do nails and clip wings - the latter of which will no longer happen) she has never been nippy as she is in the cage.   I am so excited for that but I also know that at 22 I need to take this slow for her and at her pace.    She will also be getting some outside time this summer as well but I haven't got a complete picture of that.   I am considering the possibility of an aviary out back for her that is large and will give her the ability to stretch her wings.

Far Side(non-registered)
She is a beautiful bird! I hope you have good luck working with her! Sounds like you have a plan!
Lori(non-registered)
Yay for Iago! Dad loved sending her walnuts from his tree. Hope you can rebuild that relationship, and improve her life. ♥️
No comments posted.
Loading...
Subscribe
RSS
Recent Posts
November Already Fall Projects July, August, September I Am Still Here! July 19-31, 2022 Week of July 10, 2022 Week of July 3, 2022 Week of June 26, 2022 Week of June 19, 2022 Struggling with Titles
Archive
January February March April May June July August September October November December
© MTWaggin Photos & Blog
Powered by ZENFOLIO User Agreement
Cancel
Continue