Another week has FLOWN by and I can't believe we are past 1/2 way through July.   Not to worry, the hot weather finally caught up with us although I can't complain too much since the air conditioner is in and is working!    Anyone else find that their personal thermometers change as they age?

There were however some really lovely mornings where I got to spend some time on the deck with my coffee during a break. 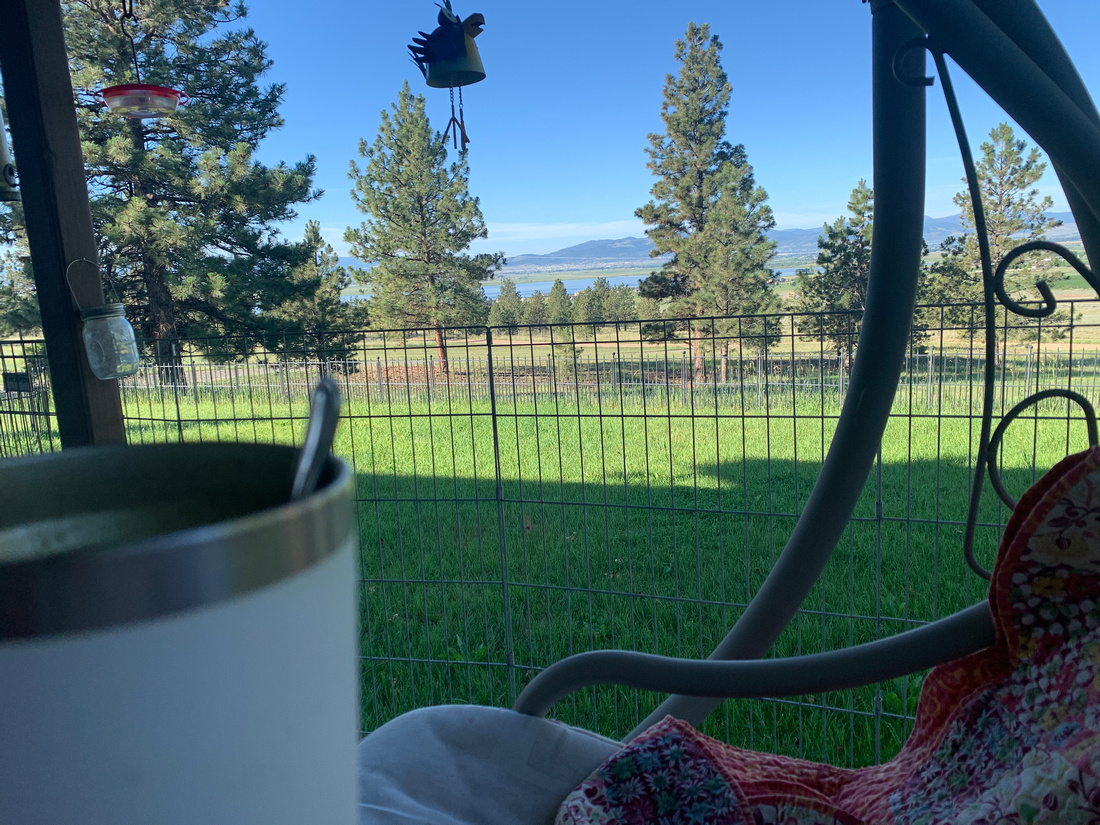 The first part of the week was busy running back and forth to town for appointments because apparently I can't spread them out.  Monday I had a BEZT appointment, Tuesday Epic had his rehab appointment (he's doing well but is THE worst acupuncture patient ever) and Wednesday I was back for a chiro appointment.   Did want to get them out of the way knowing my brother would be arriving on Sunday and we'd be busy this coming week getting things lined up for our camping trip.

I was very glad I got most of the outside stuff done before the heat so most evenings were in the a/c in the house.   Friday afternoon I was tasked with the Great Blanket Rush at the college for the symphony the next night.  It is free but if you donate $5 to the Boy Scouts you can go find a spot for your blanket Friday afternoon.  I did that as a friend decided to come down from Whitefish to go with me.  I should have had the camera as it was quite the sight to see.   But I got our spot!

Saturday (after a harrowing trip down) I picked up my friend and we headed to the concert (Symphony Under the Stars) which is a benefit for our local Food Share.   We arrived and immediately saw the big dark cloud heading our way.   Now you need to understand - somehow in all the SUTS years they have NEVER been rained out.   Not this year!   Rain, thunder, lightening and WIND right when the concert was to start.   We stuck it out (knowing it wasn't going to stick around) and were drenched (and cold) by the time it was over.  But hey - it cooled off!   Concert started 90 minutes late (9:30) which we knew meant we wouldn't be done till midnight (rather than 10:30).   It was great fun and they announced they BEAT the 22,000 (yup you read that right) of food donations that were their goal - by 2,000 pounds - a TON PEOPLE!   Pretty freaking amazing. 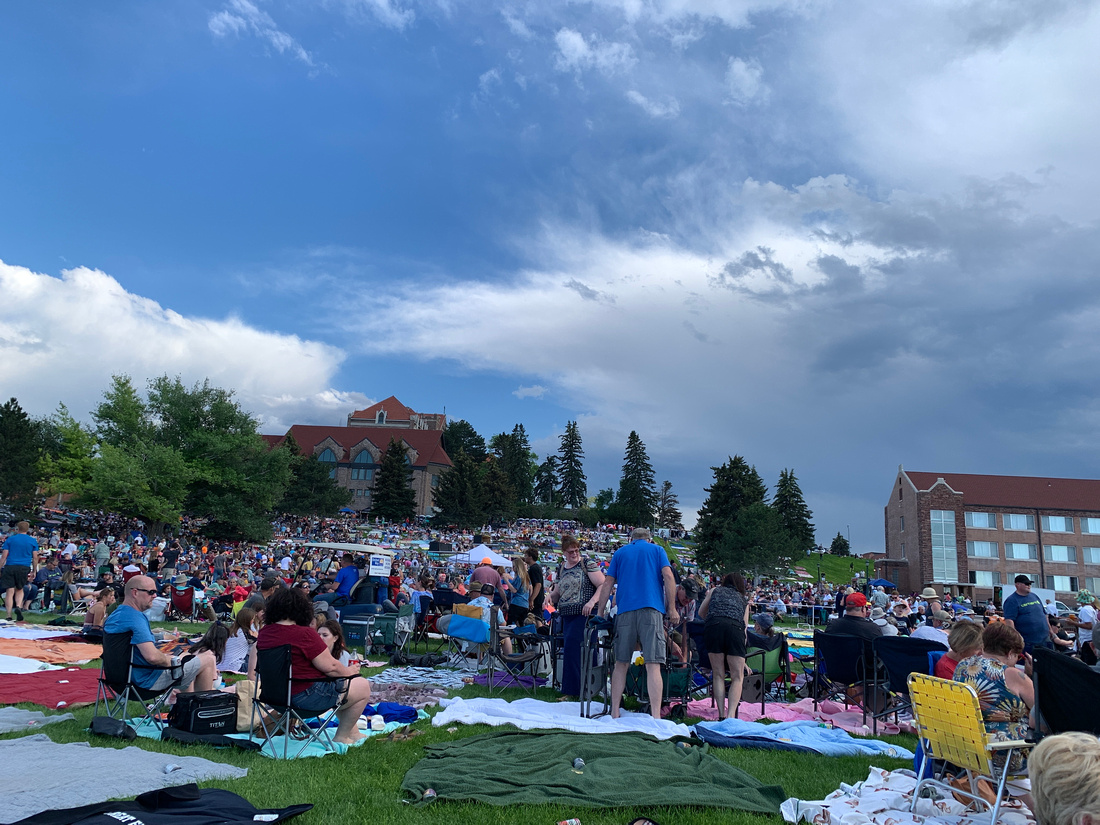 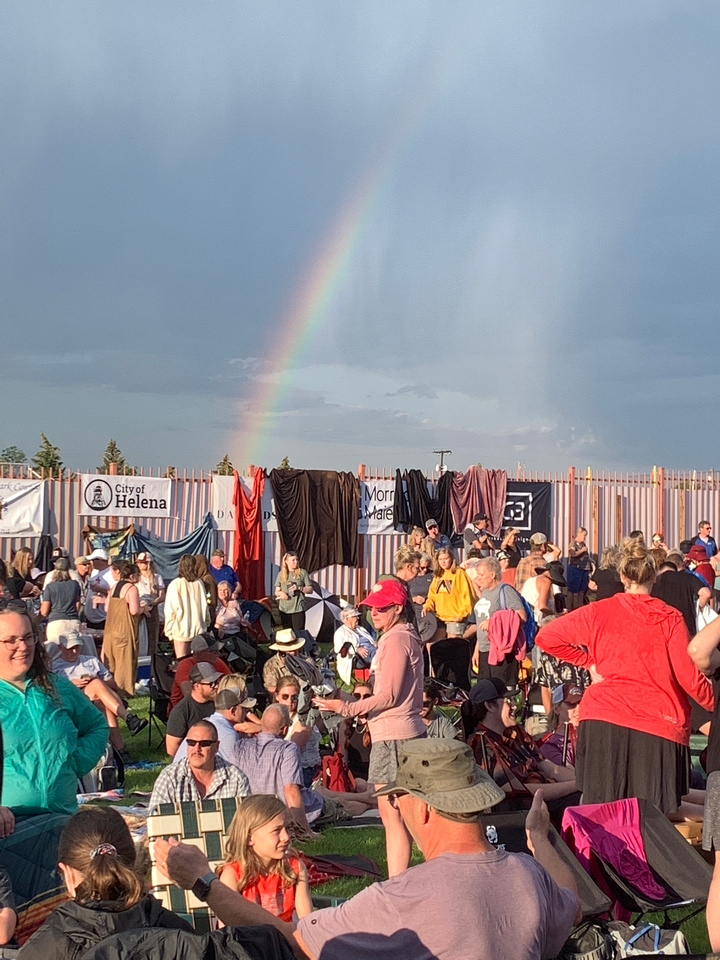 See the blankets hanging on the fence after the soaking?  The fireworks after was as always absolutely spectacular as well.   Late night and I'm telling you now, this old lady felt like I was hung over the next day (since it was 12:45 before I got home and 1:30 before I got to sleep).   All in all it was great fun and the blanket rush wasn't nearly as bad as I had made it out in my head.  You just can't be picky about where you end up.

Sunday back to town for brunch with my friend before she left for home and running of a couple errands.  My brother (and Gizmo) were arriving that night.   They pulled in about 9 pm and I was glad I had Kent's trailer pretty much set up so he could nuke some food I'd made and hit the hay after a 15 hour driving day.

This morning back to work and Gizmo is settling in.   I'll share this photo that his first Mom took before he left and will share more on his adventures in a few weeks (probably no blog next week peeps as we prep to go camping).     He's super sweet, got out and had coffee with me this morning (indoors) and is now hanging out in his new cage and apparently really likes the radio as he is chatting away out there right now.   Great big thanks to his Baby Mom, Carol for meeting my brother 1/2 way on Saturday to pick him up and HUGE thanks to Kent for doing transport and care for him (even though he has no parrot experience).

Thanks to Sue for the note and all who are reading "incognito"!  <3

Far Side(non-registered)
that is a great fundraiser, the food shelves are really in need of all the support they can get! That is one pretty parrot!
Sue(non-registered)
I'm afraid I'm pitifully behind in reading blog posts and I just noticed you mentioning Epic's acupuncture appointment.....Our Lewis is now undergoing the same (our fist experience with acupuncture) and i wonder why Epic is under treatment and how it is working for him?
No comments posted.
Loading...
Subscribe
RSS
Recent Posts
November Already Fall Projects July, August, September I Am Still Here! July 19-31, 2022 Week of July 10, 2022 Week of July 3, 2022 Week of June 26, 2022 Week of June 19, 2022 Struggling with Titles
Archive
January February March April May June July August September October November December
© MTWaggin Photos & Blog
Powered by ZENFOLIO User Agreement
Cancel
Continue