It hasn't really been that exciting of a week to be honest.  At least it doesn't feel that way but it WAS busy.  Work was incredibly busy, a bit chaotic and a bit stressful but we made it.   Working really hard to keep my work and personal life balance in check which helps with the stress.

We had a number of really foggy days as well this week.  Freezing frost as well of course but it was in the 30s during the day pretty much all week so it was kind of expected. 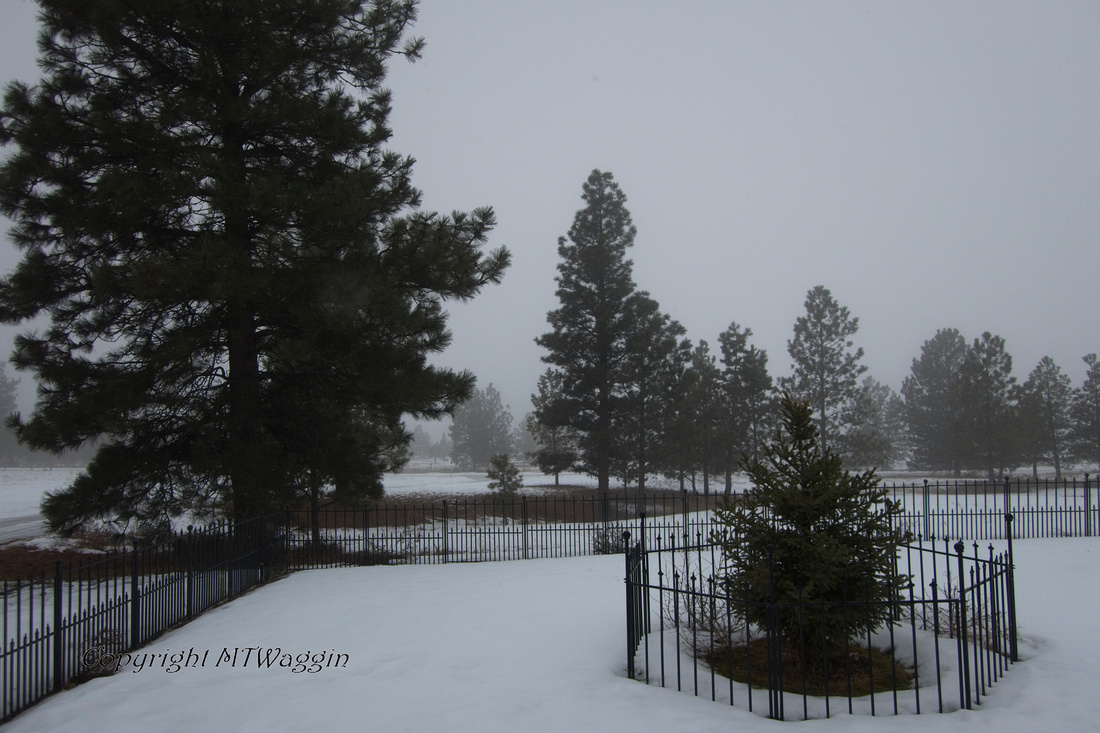 I've been having fun watching the suet eating birds return to the feeder this past few weeks.  I am going to probably do a new situation for the feeders so I can see them out my office window better.  A few years ago I put shepherds hooks up and tied branches to them and that worked really well.   It will also keep the bird poop and seed mess off of the deck and on the edge.  We'll see - can't happen this winter (ground is frozen) but will probably set it up this spring.   It will also be better for the birds when I have the dogs out on the deck - as they won't have to stress about being "eaten". 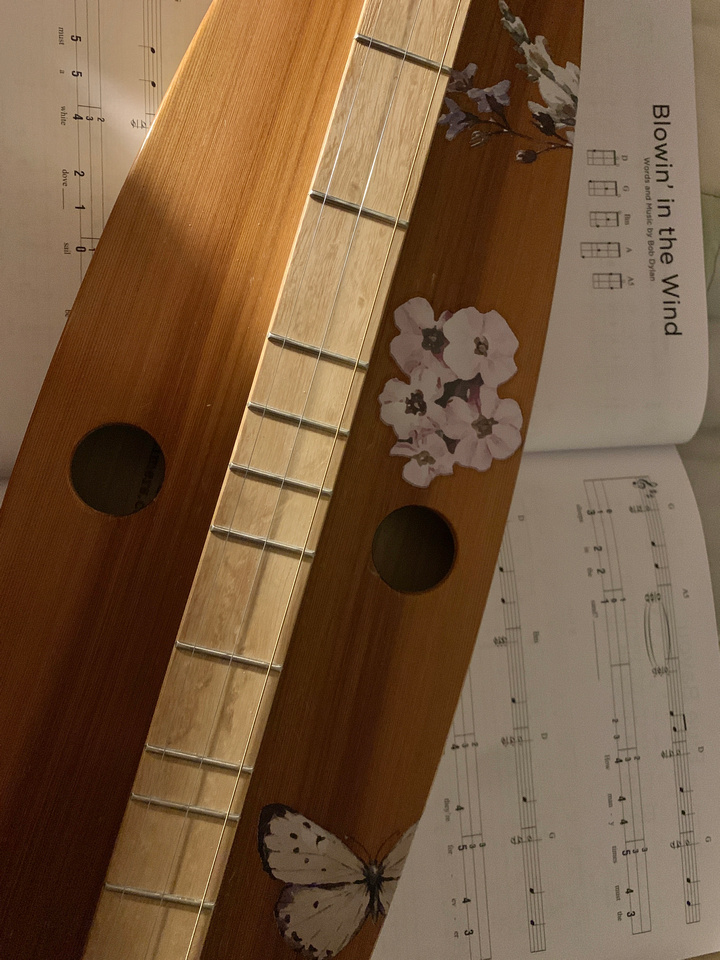 Meanwhile there hasn't been much outside time as frankly we had soooo much ice from the freeze/thaw  and the fog and a bit of snow to cover it all up so you fall on your butt.   There has been quite a bit of this: 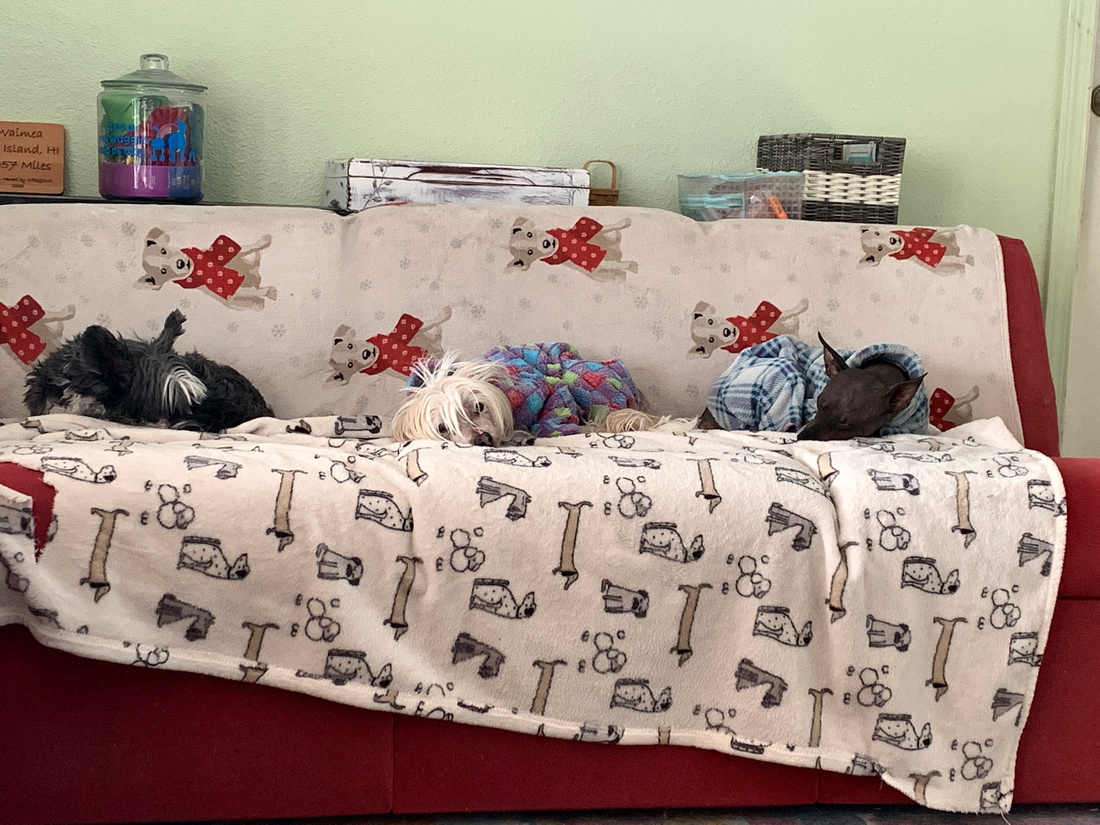 I finally figured out how to not have 2+ dogs trying to find warmth with me in MY chair constantly (makes doing any other work a bit difficult).   So I took their heating pads and put them on the couch.   This is the result!  haha

A bit more work has happened in the trailer.  One is I got all the stuff that could be moved out there now OUT there but not put away (it's all sitting on the bed).   Just too freaking cold to spend time out there right now.  However I did last weekend get a start on building the frame for the cage stand I wanted to put Iago's camp cage on.   After moving all the crap out of the house and into the trailer, I was able to dismantel the old shelves I had in the other trailer (and in the spare room to hold stuff).   By doing  that and scrounging up in my bits of aluminum in the garage I was able to find the parts I needed to start it. 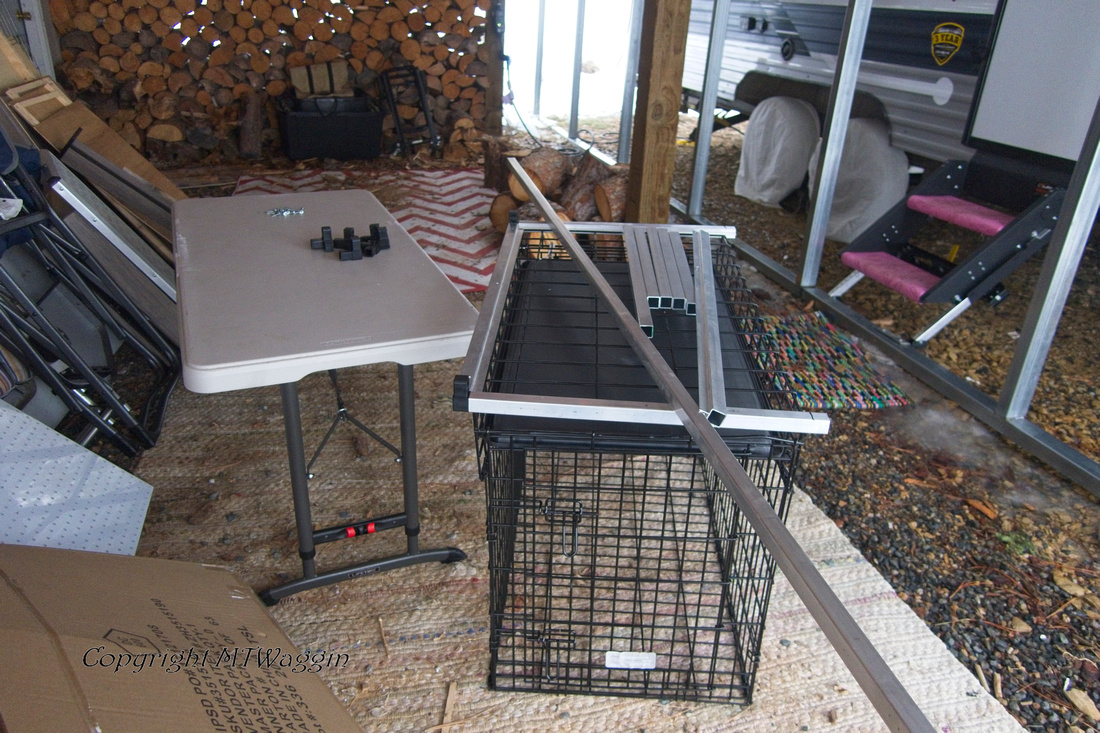 Nothing like trying to work with metal when it is freezing cold out.   Got it all sorted and marked but in order to cut pieces to length (I'm not using a hacksaw thank you) I  needed to have the truck out of the garage.   Coffee with a friend on Saturday accommodated that so even though it needs to be secured with some screws in the joints and screwed into the floor it is done! 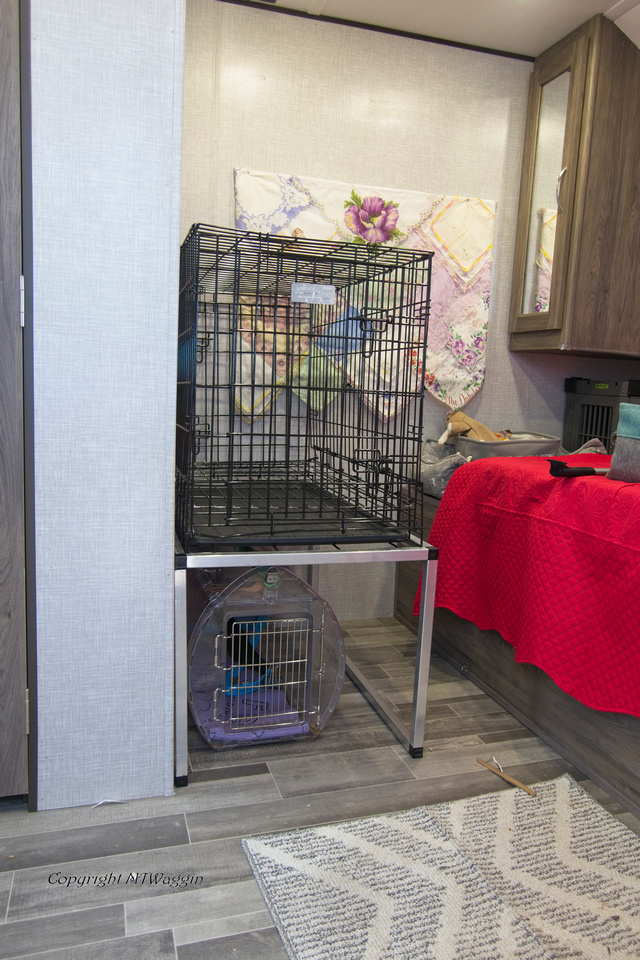 I didn't really want her on the floor (the dogs like to harass her) and I did want a place  to stash her travel cage when we were at camp (I'd been hauling it out to the truck and hauling it back).   This fixes that issue.   Gizmo's cage will go on top and also be secured to her cage.    Iago travels on the bed secured in that smaller travel cage to help with bumpy rides and the like.   Giz wil probably also travel on the bed area but not sure about that yet.

We had a sick Gizmo this week as I sat one night and saw him on his favorite perch  tapping his toes.  It is a thing  where basically their leg goes into spasm and their toes when perching grasp then release.   I knew that wasn't good and had noticed too he just generally wasn't feeling well (no talking, was fluffed up a lot).   A bit of research and one of the causes is low calcium.  So off to the pet store for some cuttlebone and mineral  block which I now put on both parrots food in the mornings.   He's good as new again thankfully.   It will also help Iago if she decides (and this is the time of year) to try to poop out an egg again.   Always something! 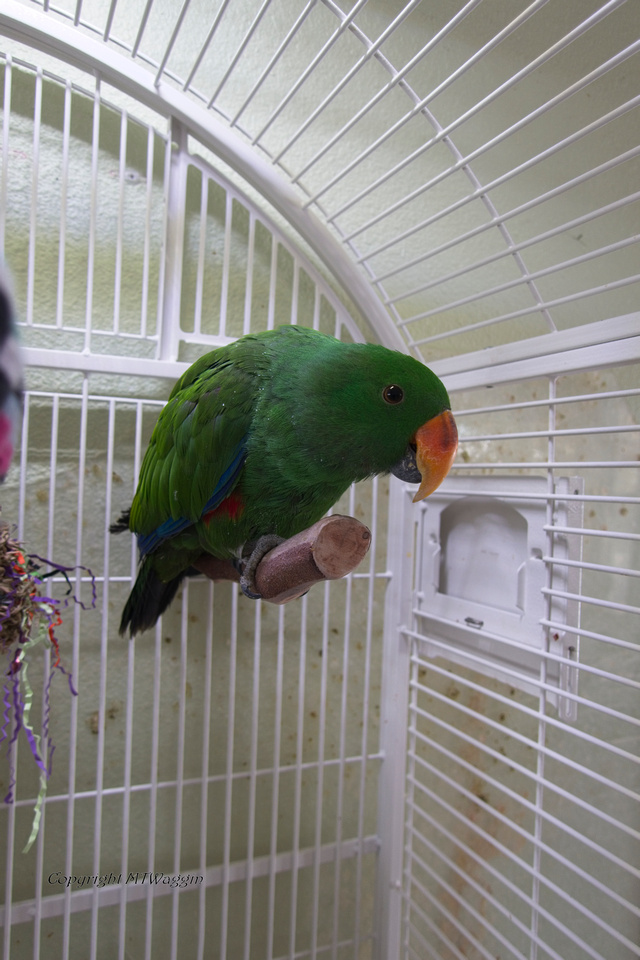 Epic had his rehab appointment this week and Dr. Davis confirmed that he was as "tight" as we thought  in his front assembly.   The chiropractor and I had been working on that without much success.  We now have some exercises to help and I think much of it is caused by his obsessive "digging" for his ball in the snow.   Some is okay but he will do it forever.   He also got some serious acupuncture to help alleviate some of it (part can also be due to his neck issues).  As a bonus  she was able to order us our own Assisi Loop (we used that last spring to help Epic with pain and inflamation and healing when he had his bad episode).  Not cheap but I'm glad to have it as I think it will be good to have for all the old dogs.

Not to be left out Josie got some new clothes!   Since she and Epic typically are the ones to go with me walking (when I get back into that mode) I had gotten an bright orange one for Epic and I love it (it's Hurtta) so went looking for one for her.  Orange was twice the price so we went with Lemon Yellow.   Doesn't she look thrilled? 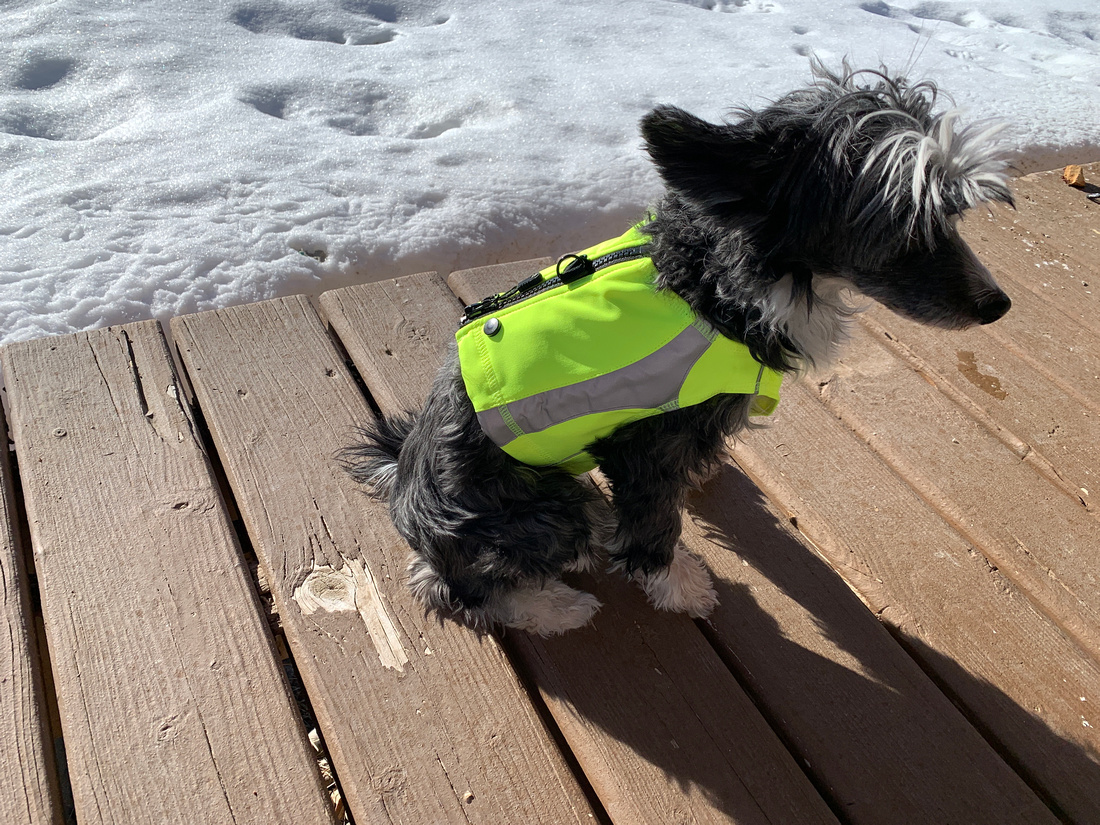 Time for me to close out this blog as I need to get out back and start picking up poop.   We are expecting more snow tonight and I need to get rid of what I can see.  Plus the sun is out right now so bonus.....after I stoke the fire.  Will leave you with a nekkid Oliver enjoying his sun yesterday (jammies were removed from the two nekkids since I've got the wood stove burning during the  day right now). 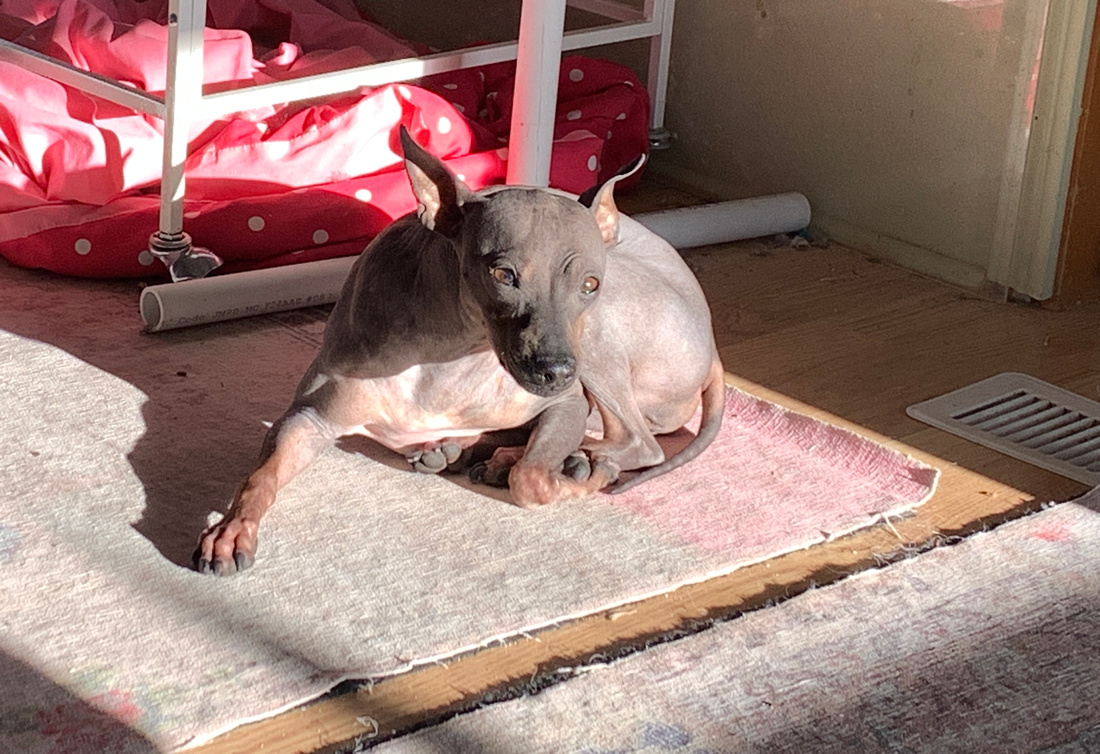